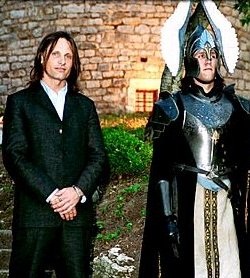 The Danish-American actor Viggo Mortensen, 42, with his role in the epic trilogy Lord of the Rings has got a possibility to become one of the biggest stars, just as Harrison Ford whose career started after his part as Han Solo in the Star Wars trilogy.

The other day we saw Viggo Mortensen stroll quietly and calmly down the "Croisette" without getting recognised, but when, after a couple of days of intense press hoopla, he arrived at the gala party for the movie walking down the flower-sprinkled red carpet in front of the Middle Age castle Chateau de Castelleras, the time for being a comparatively anonymous medium-star was over.

Several hundred press people screamed and shouted for Viggo who took all the hysteria calmly and with a lovely smile.

During the gigantic gala party where several thousand people were wallowing in mead and Middle Age wine and spit- roasted pork, Ekstra Bladet ran into Viggo Mortensen who immediately bummed a cigarette off me and introduced his girlfriend Lola.

"When I'm in Denmark I always smoke Prince. Thanks a lot," Viggo said with a slight Jutlandic accent, even though he was born and has grown up in Manhattan, New York with a Danish father and an American mother.

Now I guess it is over for you to just walk around in public without getting assailed by fans?

"Yes, but I think you can get used to it. I'm not complaining. It is a big thing to be in Lord of the Rings," Viggo said and asked us to say hello to all the friends in Denmark he is going to visit this summer.

"I'm proud that we're going to distribute the movie back in Denmark. It is going to be such a big thing and we have invited Queen Margrethe and the entire royal family to the gala premiere. The Queen is a big fan of Lord of the Rings," Lars Bennike from SF-films tells us. The movie will come to Denmark in December. Viggo Mortensen will be there too.
Top of this page
Last edited: 22 May 2012 05:13:07