We are beginning a new year, and very soon a new tournament. For San Lorenzo the Clausura 2012 will kick off with the pressure attached to being in the promotion zone. As always, we want to see the team playing well. We want to be champions. But the main aim will obviously be to avoid being relegated like River Plate last year or like CASLA 30 years ago. I trust the talent of our first division team, and the fighting spirit and shrewdness of Madelón. The recently signed Uruguayan forward Carlos Bueno speaks like any other "Camboyano."[tr. note: another nickname for SL] Let´s see if he and his teammates have the mental strength we need to turn around the current situation. Let´s see if Botinelli and the other indispensable ones can be paid for their work as they should be so that they continue with CASLA. We need to begin the tournament with a lot of enthusiasm, starting off very high up to offer our champion son [tr. note: Boca Jrs.] a good match on the fourth date. The best supporters have their eyes wide open, and they care as much for success in the sport as for their club´s good name. Let´s hope this year can be, in every sense, one deserving of the great San Lorenzo tradition.

Gutiérrez: It seems to me that he left in a very clumsy way and it will cost him. He has talent and played quite well for San Lorenzo, but it seems that the work ended for him there. I see this kind of thing a lot in film, actors that leave productions at the last minute before filming and sometimes sink them. It tends to be a little (or a lot) the fault of agents and others who give them bad advice, but in the end, the player or the actor who is an adult has the responsibility. The truth is, as our coach said so well, that it's much better that he went to Mexico or some other place now instead of doing it during the tournament. Better to rid ourselves of those who are going to waver before entering the fight for the honor of the club and the personal pride that any professional should have. It's true that the club is going through a bad time economically, and at the institutional level, there seems to be a little confusion. But where Gutiérrez is concerned, I think that the board has spoken as correctly as Madelón has. If you're not going to give it all you've got, just walk away. Our shield isn't tarnished. 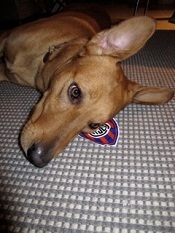 The best supporters have their eyes open.
© Viggo Mortensen.
Seeing that Cholo Simeone has signed as the new coach of Atlético de Madrid, the team where he had so much success as a player, and where the supporters adore him, I thought about the Argentinian player who brought perhaps more glory to the "Colchoneros" [tr. note: supporters of Atlético de Madrid] - the Cuervo champion Rubén "Ratón" Ayala. Twice a champion with San Lorenzo in 1972, and a three-time champion with Atlético de Madrid - including world champion in 1974, scoring the winning goal in the final against Independiente. A boss in every way. He played for the national team in the 1974 World Cup, with the longest hair in the history of the World Cup, and as a coach, was twice the Mexican champion with Pachuca. I haven't been able to find the ad he made for "Interminable" [tr. note: the athletic shoe brand], where he uttered the unforgettable phrase, "You can't get them in Europe," but here are some of his goals: 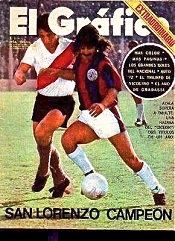 © El Grafico.
Speaking of great figures, of unforgettable characters, I salute the fencing master Bob Anderson, who taught me to fight with the sword in Alatriste and the Lord of the Rings trilogy. Bob died on January 1 in England. Agustín Díaz Yanes, Alatriste's director, said of Bob, "He was a genius, he was marvelous. A true Englishman, but with a detached self-irony."

Peter Jackson, the director whom Anderson helped so much with the action scenes for The Lord of the Rings, said:

"It is rare, even within the film industry, that you get to work with a legend which was why I was thrilled when Bob Anderson agreed to come on board The Lord of the Rings as our sword-master. In fact, it took a while for it to sink in that I was going to get to work with the same man who had helped create some of cinema's greatest fight sequences - from Star Wars to The Princess Bride. Bob was a brilliant swordsman and a gifted teacher; I will remember him as a wonderfully patient man, possessed of a terrific sense of humour. It was a privilege to have known him." 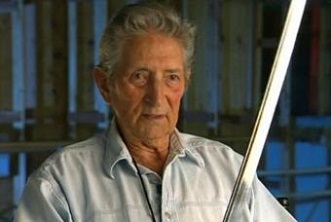 Bob Anderson.
© Unknown.
This is what El Pais published about Bob:

and this is what The Guardian, in his native England, had to say:

I remember a practice session with Bob which was attended by several highly experienced fencers who were my opponents, including one who was internationally ranked. This man was attacking me with some ferocity when Bob suddenly halted the practice. He asked him to come closer, that he wanted to ask him something. Bob wasn't feeling well at that time; he had a lot of problems with his health, and was seated in a chair. He wasn't able to fight with us to show us how he wanted to put the sequences together. He remained seated, watching the practice, occasionally giving us instructions with absolute calmness and authority. He didn't miss a single detail. He asked the fencer if he felt comfortable. He said yes. Bob asked him if he wouldn't feel a little more comfortable if he slightly changed the way he held the sword, a matter of a centimeter. The swordsman said it wasn't necessary, that he'd done it that way for many years, and quite successfully. So Bob grabbed a sword that he had on the table beside him and asked the guy to put himself en garde."Are you ready, sir?" asked the master fencer. "Yes, always," said the swordsman with a small smile, probably thinking that Bob was joking. "Are you really ready?" "Yes, sir." With a light but very quick movement of his wrist, Bob struck the man's sword, and it flew some 10 meters. The swordsman stood there amazed and a little upset. We [were] very still, amazed. The fencer was very good and Bob, without getting up from his chair, had handled him as if he were a snotty-nosed kid. "You weren't completely ready. Go get your weapon, please." The other man went to get it and returned. "Put yourself en garde again." A little embarrassed, the swordsman stood firm, determined to defend himself well this time. "Are you completely ready?" "Yes, sir. Ready." Bob did the same thing to him, with a simple but perfect movement and the blade again flew to the other side of the room.

The swordsman was left speechless. "I think perhaps I might be able to interest you in changing your way of holding the sword a little, isn't that so?" "Yes, sir." A Zen feat that I wouldn't have believed if I hadn't seen it with my own eyes. That was Bob Anderson. The most perfect gentleman and a complete genius. Those of us who had the good fortune of learning from him will never forget him. Once, I told him that the Cuervos were almost as valiant and cunning as he. I told him a little about our glorious history, of San Lorenzo's endurance and passion, and I gave him a CASLA badge. He laughed, but I think he enjoyed what I told him, and the comparison.