"I found the Viking inside me"

Source: Ekstra Bladet
The Danish-American Viggo Mortensen is on his way to star status in Hollywood with his role as the hero Aragorn in the movie Lord of the Rings. 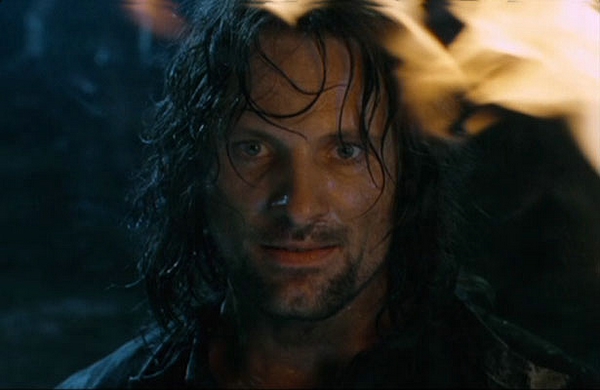 © New Line Productions Inc.
"Can I bum a cigarette off you? I see that you smoke Prince. I do too when I'm in Denmark."

Viggo Mortensen is very Danish and plain when he talks to the journalist from Ekstra Bladet at a huge Lord of the Rings night-party at the old Middle Age castle Chateau de Castellaras in Southern France.

He is in company with his girlfriend Lola and the couple stroll peacefully and quietly around the castle that for the occasion of the party is transformed into the legendary universe of Tolkien, Middle-earth, and decorated with colourful banners and lances. The 43-year-old Danish-American Viggo Mortensen tells us with a slightly Middle-Zealand dialect that once in a while is spiced with American words that he is fantastically happy about his role as Aragorn.

"The role has been a part of getting me closer to my Danish roots," Viggo says. He has a Danish father and an American mother and has by the way grown up on Manhattan in New York.

Viggo Mortensen read for the first time the saga about the Lord of the rings by Tolkien on the plane when he was on his way to New Zealand where he spent 1½ years continuously filming all three movies.

"It felt like being thrown back into my childhood and I quickly found out that the books are based on things I already knew. As a child I was told a lot of sagas and fairytales as goodnight-reading and I have also been thoroughly informing myself about, for instance, Nordic mythology and the Celtic myths. It felt like I was finding my inner Viking."

SERVING APPRENTICESHIP WITH A SWORD MASTER

Viggo Mortensen actually looks like a real Viking when he is proudly walking around in the garden of the castle in bare feet. The long dark-brown hair fluttering in the wind and a marked scar coming from his upper-lip to his nose are, together with the fixed calm look, showing that this is a man who knows what he wants.

Viggo Mortensen has during his 43 years spent maybe five years in Denmark when he was young and amongst other things worked as a dock worker, at Burger King and as a waiter for the restaurant "Jan Hurtigkarl" in "Dronningens Tværgade" (street) in Copenhagen.

Viggo also feels himself closely connected to the landscape of Middle-Zealand (Middle-Sjælland) where his uncle has a farm in Jystrup, and where Viggo as a child while visiting Denmark played in the nearby wood and fought with swords.

"I've only been fighting with wooden swords as a child, but during filming I've been taught to fight with real sword by the legendary sword master Bob Anderson. Aragorn is a real warrior that with his sword and his life wants to protect the small hobbits. I also got a lot of riding lessons and was taught how to speak with a special English dialect," Viggo explains about the preparations for the role.

"Aragorn doesn't love or hate fighting. He sees it as a duty to fight against the evil and take care that the ring ends up in the right place.

The Hobbits live in a quiet society that you can compare to, for instance, England. They live in a safe and peaceful ignorance, while the warriors Aragorn and Boromir constantly protect and all the time secretly fight against the evil in the surrounding woods. I compare it to a fight for democracy," Viggo Mortensen says.

Before the most important role of his life as Aragorn, he had been in about 30 other big Hollywood productions.

"This movie is the biggest I've experienced. And it has been fantastic to work together with some of the best actors in the world.

I'm, among others, thinking of Ian McKellen and Christopher Lee. It is also a fantastic story that not only comes alive because of the special effects in the movie. You can compare Lord of the Rings with Star Wars, but I think that the characters in Lord of the Rings are more individual, original, and expressive. Star Wars is more of a surface-story, while the director Peter Jackson in Lord of the Rings has worked hard to express the person's mentalities and their doubts and hopes," Viggo Mortensen explains.

There are a lot of women who think you are unbelievably sexy in movies?

"Yes, I've heard that, and my college Sean Bean also says that. He plays the warrior Boromir.," says Viggo with a big laugh.

Does the movie also show some of Aragorn's romantic aspects?

"Yes, Aragorn has for a long time been deeply fascinated by the royal elf-girl Arwen who is played by Liv Tyler and that love grows bigger. But I don't want to say anything more about that yet."

Viggo Mortensen has by the way a 13-year-old son by the name Henry. He is named after Viggo's uncle in Denmark.

The half-Dane Viggo is a man with a lot of artistic abilities. Before he became an actor he wrote poems and he has just released his third collection of poems. Viggo has also got a career as a painter and photographer and he has exhibited his work in many well-known galleries.

At the moment you are able to walk around without getting assaulted, but I guess it'll soon be over?

"Yes, with the role of Aragorn it is going to be over with an anonymous life. Lord of the Rings may be the biggest movie ever and that will get you attention. Actually I don't know for sure how I'll tackle the big fame that comes with the role. Maybe I should hide a couple of years here in Middle-earth," Viggo says.

But he promises that he'll do everything possible to arrive at the huge movie gala-premiere here in Denmark on December 19th.