By María Martín - translated by Ollie and Rio 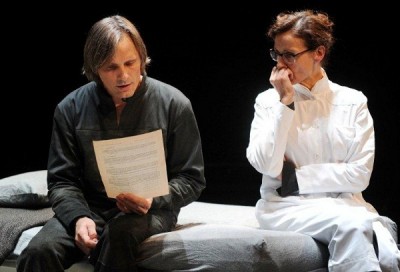 Rehearsals - October 2011
Image Andrés de Gabriel.
© Teatro Español.
An austerely decorated room. A bed, a table and two chairs reminiscent of a jail cell. Or a psychiatric [cell]. A man dressed in a white doctor's coat. A woman in a gray dress, her hair loose. Painful memories, compilations of a life marked by death and deception. Murders, love, pain, vengeance, madness, forgiveness. All contained in two characters who play at cat and mouse with memory and feelings. Mythology, confrontations, truth and lies cooked up into one dish. Purgatorio, Ariel Dorfman's most recent work, playing these days at Las Naves del Matadero is all that, and more.

The first thing that captures your attention in this staging is the layout of the set and its austerity, conceived of and used to toy with the spectator, to pull him into the story and break that fourth wall at precise moments, in a considered attempt to appeal to the sensitivity and the emotions that the spectators feel in moments of high dramatic content.

By means of dialogs which at times turn into interrogations searching for the other's weak point, of vague games of seduction, the play unwinds the skein that binds this man and this woman, whose names we never hear, and leads the spectators to the resolution of the only possible mystery. Who this couple are and what they have done in their lives that deserves to be analyzed in such detail. Little by little, thanks to the role reversals and the nearly surgical perfection with which the interrogators/doctors channel the conversations, the spectator soon finds himself immersed in a story that reinvents one of the most classic Greek myths. Discovering the identity of the characters turns into a game, the recreational counterpoint to a story laden with misfortune.

Viggo Mortensen is a better stage than film actor. And not because that medium is bad, but because the nearness of the spectator and the live performance allow one to appreciate more intensely the entire panoply of gestures and intonations that accompany his acting. From the sober, tough, unpleasant, and relentless interrogator of the first act, he transforms himself into the frightened, eager to please, somewhat conceited and competitive man he is in the second, when the roles change and he turns into the victim of a tyrant, also played to perfection by Carme Elías, who is at times playful and affectionate, other times inflexible and insensitive. Nonetheless, and without taking a bit of merit from the Australian [sic], it is Elías who truly shines in this play, with her transformations from an angry woman driven insane to the doctor who is calculating but longing to help.

Purgatorio is not a play for everybody, because it requires from the spectator not so much knowledge of Greek mythology (which undoubtedly helps in understanding what´s being told on stage) as a conscious and unconscious wish to become involved in what is being told, to share the emotions the protagonists feel and be carried away by their love and madness. Undoubtedly, Dorfman´s great text and the good choice of the stage design, music and wardrobe help in this venture that, nevertheless, is an unquestionable success thanks to the talent of the two actors. Never were Viggo Mortensen or Carme Elías more right in their acting. Because of all that, Purgatorio is a true luxury for theatre lovers.