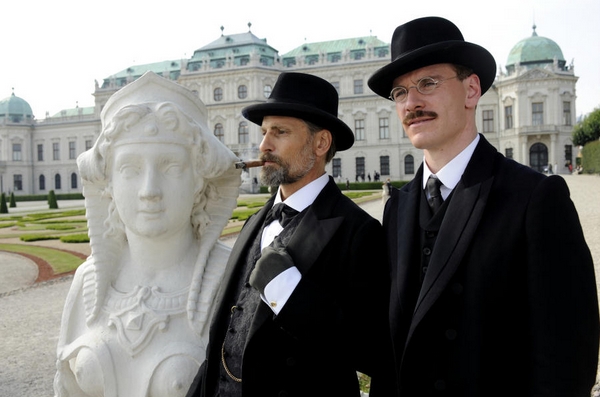 "We can do some doll therapy if anyone's interested..."

"I have no idea what this jersey is. Viggo just told me it would wind David up."

Keira Knightly on wearing a Montreal Canadians sweater at the Press Conference
TIFF Press Conference Diaries: It's game on for the stars of A Dangerous Method
Ben Kaplan
National Post
10 September 2011

Viggo said that on the set Michael would hop around on one leg with a large red eyepatch to prepare for his scenes. What the hell was that about?

Yes, yes, I don't know what that was about. You'll have to talk to Michael about it to get the story. You have to understand that Viggo, being as playful as he is, could totally be making that up.

While we were shooting this one scene, where Freud's sitting behind his desk and I'm sitting right in front of him, and we're having this really deep conversation which turns out to last like 13 hours or something.

And in between takes--at first I don't notice--Viggo keeps pushing these penises, no, what do you call them? Phalluses? Freud's desk had all of these little statutes and things, and some of them were phallus sculptures from different cultures around the world. And Viggo kept pushing them towards my end of the desk. I didn't notice at first until I looked down and saw them all, inching ever-forward, with Viggo smirking, really a prankster, dressed up as Freud. It was surreal!"

"We also had a lot of fun singing duets. In Belvedere Gardens where Freud did take his walks, and then you see him in the end, in his morning walk, we were singing at the top of our lungs, which surprised the public and some of the journalists. He has a good singing voice and I did harmony. In Belvedere, we sang that song "The Lion Sleeps Tonight," including all the high notes, which Michael hit really well."

"There's a YouTube footage where we were singing outside the Belvedere [in Austria]. We used to sing a lot. That's something I do a lot of, anyway. It's like somebody will say a phrase and I'll sing the rest of the line. It's like a way to be relaxed."

What songs did he and Viggo sing? "Anything really," said Michael, "like 'Young Girl'" (by Gary Puckett & The Union Gap). He was told that the song's refrain, "Young girl, get out of my mind," was a fitting one for his characters in both "Shame" and "A Dangerous..."

"I remember Viggo and I came bursting into the makeup room and singing. Keira (Knightley) was getting her hair done. We made her and the makeup artist jump out of their skin," said Michael.

"It comes from a very good tailor in Boedo, in Buenos Aires. San Lorenzo de Almagro".

Viggo on being asked who tailored his Golden Globes suit
Mortensen highlights his Argentinian team at the Golden Globes
By E J Tamara - translated by Ollie, Rio and Zoe
Publimetro
16 January 2012

E.H.: How did you find out about your nomination?

V.M.: I'm in Madrid. It's nine hours later, but they don't show that here anyway. I was headed to work -- I'm doing a play -- and a friend called and told me. I'm very grateful, but I would have been even happier if [director] David [Cronenberg] had been included. I owe it to him. He made a risky decision to cast me as Freud, and I'm glad to see his hunch paid off. I'm proud to represent "A Dangerous Method" at the Globes.

"I can talk on film," he quipped on the red carpet, poking fun at the many roles in which he is a man of few words.

...during a night of metaphoric flag-waving, Viggo Mortensen stole the show by breaking out an actual flag during his acceptance speech for Best Supporting Actor for "A Dangerous Method." The die-hard Habs fan dedicated the award to his favourite team as he wrapped his newfound trophy in a Montreal Canadiens flag, all while the orchestra tried to play him off -- though maybe the conductor was a Leafs fan.