On 'The Road' To Perdition 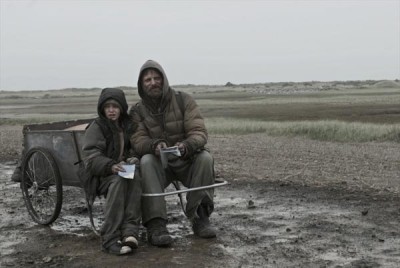 But for those who have yet to read Cormac McCarthy's Pulitzer-winning 2006 novel (which Oprah quickly added to her book club), whose only knowledge of McCarthy's penchant for the grim is 2007's Academy Award-winning No Country for Old Men, don't say we didn't warn you: The Road makes No Country]/i] look like Disneyland. It's a father-and-son story of survival in the direst of conditions, when an inexplicable event has left the earth raw and unforgiving and its few survivors even more so.

Viggo Mortensen, who stars in director John Hillcoat's adaptation of [i]The Road, has a way of seeing McCarthy's post-apocalyptic tale as a kind of a secular spiritual journey. "If you honestly go through this tough of a journey," he said in a recent telephone interview, "you end up uplifted in the end. That kindness is the greatest good."

We pressed Mortensen for details on his intense character's struggle to stay alive, the authenticity of his filthy appearance and his young co-star, 13-year-old Kodi Smit-McPhee, whom Mortensen has since named one of his favorite actors.

The producers of this film sought out locations that were wrought with natural and man-made disaster: post-Katrina New Orleans, areas around Mount St. Helens, ravaged outskirts of Pittsburgh.

Yes, and the bulk of it was shot in different parts of western and central and northern Pennsylvania in the dead of winter. Since it's all hardwoods, it looks like dead trees. And the weather was absolutely terrible: We were cold and miserable all the time, so it was perfect (laughs).

And you thrive during those conditions?

It helps. If this weren't a relatively low-budget movie, we could have everything set up via a green screen and plug in the weather later, but it's not the same thing. I know it helped Kodi and it helped me to actually be in the environment. I've never been in a movie where the environment was so much of a character. It has so much of its own ... nudity, though I'm not sure that's the right word. Nature, you can feel. It's palpably alive. And it was beautiful, and it did have an effect. It did push us to places that we might not have otherwise gotten to.

You've mentioned that you were very impressed with Kodi as a young actor and that you count him among the best actors you've worked with.

Yeah, of any age or any experience. This is one of his first couple of movies, and he was very well prepared. He didn't just show up with some kind of emotional availability and a unique presence - which he did - but it was more than that. He had an understanding of the story and the book really well. ... I felt very protective of him, like I do with any acting partner, but especially him being so young and out in elements, because a lot of our stuff is so emotional, you feel like you want to take care of the boy. But I felt like I was dealing very much with an equal sometimes, or even someone more experienced than myself. He had a real beyond-his-years understanding of what we were trying to do. He never quit on anything, which is amazing. There's a lot of adult actors who could learn a lot from his work ethic.

You're filthy in this film. Did you enhance any of it on your own?

I definitely bathed, but we had a great makeup and costume department. But because we were outside and in the cold a lot, certain things did happen. That also has to do with that leap of faith: to be exposed. Things happen - to your skin and your nails - and there's something that happens that's the magic of the movies.

You're essentially a homeless person in this film, living on the road, wandering.

And living in regret most of the time, yes.

I read that you spent some time looking into the lives of the homeless.

In the months before we shot, I was traveling a lot shooting and promoting another movie, and in every city because I had this story in mind, I found that it was very useful to talk to people. A lot of times they were living that way by choice. It was interesting to speak with them when we were shooting in Pittsburgh.

The conclusion that you come to is pretty simple by the end of this (film): If everything's taken away and you have nothing, it becomes quite obvious that the most important thing at the end - more important than any possession, good or bad weather, wealth or anything else - is kindness. When you take everything else away, the dramatic situation is one presented where you come to realize, if you're at all open to it, is that what matters most is intangible.
Top of this page
Last edited: 15 February 2011 09:15:33
© Chicago Tribune.