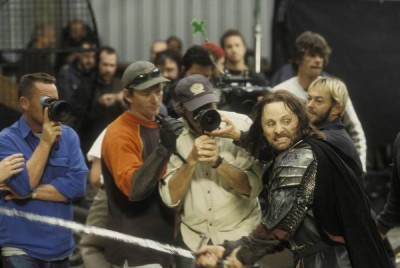 © New Line / Cinematrix.
As The Lord of the Rings: The Return of the King marches along to what looks like Oscar glory, we thought we'd take a moment to remember some of the little people that the Academy of Motion Picture Arts and Sciences forgot: actors who played key roles in the Tolkien trilogy's huge ensemble.

True, director Peter Jackson fills the screen of this third epic with some of the most amazing effects and action sequences ever slapped on celluloid. But really, would the pictures - and, especially, this moving and absorbing third one - be anywhere near as effective without the magisterial determination of the wizard Gandalf, the quiet and conflicted courage of the reluctant monarch Aragorn, or the psychotic complexity of the ring-corrupted Smeagol/Gollum?

Not in a million Middle-earth years. So, some brief reintroductions to our favourite Rings actors seem eminently in order.

Obviously, soft-spoken Mortensen was perfect casting for the soulful adventurer-king Aragorn. Even if he wasn't the first choice.

"I don't like the possibility of being the one person who, when you watch a movie, you say you didn't seem to know what he was doing," admits the New York-born, Argentina-raised, half-Danish actor, who was called Down Under to Jackson's location when the original actor, Stuart Townsend, proved wrong for the part. "But it was probably a blessing not to have any time to get nervous about it. I was jet-lagged when I arrived in Wellington, and they drove me to these old army barracks. Inside was sort of a small gym. Against the wall, kind of vibrating and all tensed-up and sweating, was a whole group of people. It was the stunt team, some of them had real scars and they were very scary-looking, holding all of these rusty, blood-stained implements of destruction.

"Bob Anderson, the sword-master, introduced them as the people I'd be fighting with for the next year-and-a-half or so. Then he gave me my sword, pointed me in their direction and said, 'Go.' They all came screaming, running at me. I didn't know quite what to do, so I sort of covered myself and they stopped right in my face, waving these weapons. Bob said, 'OK, good. You didn't run away, that's a start.' That's kind of how I got going on these movies. It was that way with everything."

Mortensen made his screen debut in Master and Commander director Peter Weir's Witness and subsequently muddled through a hit-and-miss movie career (The Indian Runner, GI Jane, A Perfect Murder and A Walk on the Moon were among the more memorable entries.) Although Rings has raised him to a new professional level, it doesn't sound like he plans to alter his work ethic anytime soon.

"I've always approached the business of trying to find work in some ways that are probably not so wise or practical," Mortensen says. "That is, to wait for a story that I really like or that is a real challenge and that I can learn something from, to find me. I wait until that happens ... or I run out of money. I can't help but do it that way, and once in a while it works. Just like going fishing."

"In the sense that I'm curious about people and my surroundings, I've more or less kept alive my childhood interests in drawing and making up things and playing games," he explains. "I mean, my tools for being present are looking with the help of, at least, the idea that I could take a picture or write it down or tell a story about it."

Appearing next in the 19th-century Arabian horse race saga Hidalgo, Mortensen admits that the long but rewarding Rings expedition has shown him just how fulfilling the acting game can be.

"This experience could've gone the other way; we could've all hated each other after all of this time cooped up together," he notes. "But we bonded so strongly that there's no way that the experience of shooting this, and getting through the good and bad times together, won't have had a permanent effect on us. There's this family connection in the crew and cast that's unlike anything I've ever experienced."
Top of this page
Last edited: 1 October 2010 10:01:37
© U-Daily News.