In The Name Of The Father

By Natalia Trzenko - translated by Ollie and Zooey

Source: La Nacion
The lead character of The Road, which will premiere the day after tomorrow, talks - with the most Argentinian of idioms - about his career, cinema, and the love of his life - San Lorenzo. 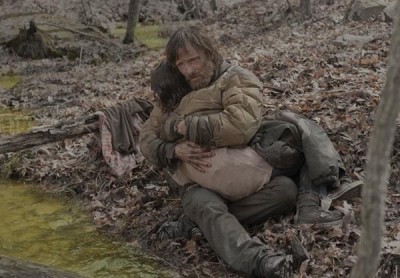 Image Macall Polay.
© 2929/Dimension Films.
It doesn´t matter how many times he changes his hairstyle, modifies his physical build or grows a beard. What surprises the Argentinian listener most about Viggo Mortensen is his way of speaking. What is amazing (no matter how many times you have heard him before) is that the man who portrayed Aragorn in The Lord of the Rings, Captain Alatriste in Alatriste or the Russian mobster in Eastern Promises speaks Castillian like any porteño native.

It continues to be hard to combine the image of the lead character from The Road, the film presented by Distribution Company in Argentina the day after tomorrow, with the accent and the Argentinian idioms he uses; he will make the most of that next year if the filming of his first Argentinian film, Everyone has a Plan, Ana Piterbarg's directorial debut, finally takes shape. For now, he performs the man without a first or last name in the film based on the novel by Cormac McCarthy (also responsible for the book that originated No Country for Old Men), winner of the Pulitzer Prize. In it, he is in the middle of a world devastated by an apocalypse that is neither named nor seen, but whose consequences are perceived in every crease [in his face] and in every one of the tears of the child (Kodi Smit-McPhee) that accompanies him.

"What we filmed was quite true to the book. Although the fear and desperation are taken to extremes, what the film shows of the love between father and son is real. The different ways in which people confront a crisis, that's understood by everyone," says Mortensen, who for this role had to lose a lot of weight - so much, that each time the wind blows in that inhospitable landscape through which they travel, he gives the impression that he will not be able to take one more step. But he does and continues along the road with the boy of the impossibly innocent look in tow.

"There are very beautiful and tender moments in this film, that happen because opposite me, I had this great actor, a genius. John Hillcoat, the director and I could have done the same work with the same dedication, but if we hadn't found a young actor with the ability and depth as a person that Kodi has, we could not have come this far," recalls the actor who challenged the prejudice that there is no worse punishment for an adult actor than to work with a child.

"His stamina impressed me, because, although I was thin and the cold affected me more than usual, for him - who's Australian and had never seen snow - it was a completely new experience. He figured out a very mature way in which that inconvenience served him and he told it to me: 'Everything that we're doing is already difficult enough to have to pretend on top of that that we're cold. Seriously, it's easier to feel it .' The landscape also helped; it was our measurement, because it was so real that we could not be less authentic," recalls Mortensen of the months that passed filming among areas affected by Hurricane Katrina, a volcanic mountain in Washington state and terrain destroyed by mining.

In order to confront the physical rigors of the filming, but above all the emotional ones, the actor set in motion a process that often differentiates him from his peers and takes it to extremes.

"It's very difficult to prepare yourself for the end of the world. For me, the preparation was to see certain images, films and take notes. I had things written on the wall...things that made me think. The moments of physical and mental crisis are the ones that tell the viewer what you are like. The whole time I had very present a quote from José Ortega y Gasset...I have it here in a notebook. Can I read it to you?" asked Mortensen, and when he's told, "Sure, of course," he proceeds to recite.

Having finished the philosophical interlude, he's reminded of a phrase from Flaubert, and then, at almost twenty minutes from the beginning of the chat, his favorite theme - at least when he runs into an Argentine ear - San Lorenzo, he will get it into a conversation about fathers, sons and the fate of humanity in an apocalyptic world. Although the relationship between themes seems slightly improbable and a bit far-fetched, Mortensen manages to set it up with a passion that only an authentic soccer fan can have.

"Javier Aguirresarobe, our Spanish cinematographer, had an Argentinean assistant, porteño, Matias Mesa, a fanatic supporter of the Rojo, who although exercising great pressure on Kodi, couldn´t get him to become a supporter of Independiente. The kid learned to ask for a choripán and mate and to break the Spaniard´s balls, surprising him with his porteño accent : he is an out-and-out cuervo. I´m spreading "the cuervo gospel" all over the world. That´s not only my mission, but my career, that´s my job. Cinema, poetry and all the rest are hobbies. Spreading the cuervo gospel, that´s what I´m dedicated to, " enthuses Mortensen, and without really knowing how but with a couple of words and a lot of imagination, he achieves his goal, connecting the bleakness and his character´s struggle to survive in the midst of it with the recent campaign by the team of his obsessive love...

"These characters, the father and his son, in spite of seeming to be very cold, in fact, beneath the rags they wear, happen to have San Lorenzo t-shirts," says the actor, and laughs.

Nevertheless, something indicates that he is talking very seriously and that if he were called to face the end of the world as we know it, he would do it with a t-shirt from his team pressed to his heart.
Top of this page
Last edited: 28 June 2010 10:15:25
© La Nacion.