4 August 2022 15:08:35
Source: Outside.
Found By: Chrissie
Categories: Magazine/Internet Interviews Movie Promotions Thirteen Lives
Thanks to Chrissie for the find. 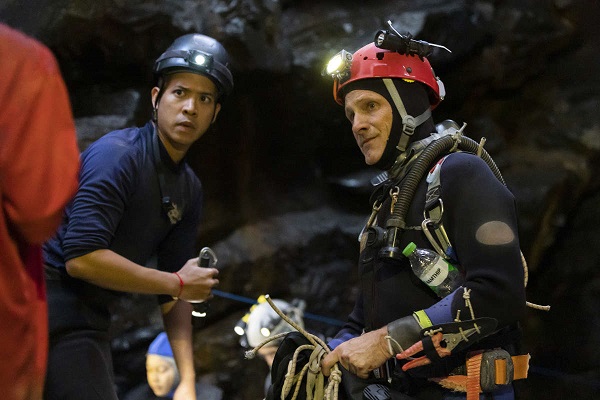 In the new film ’Thirteen Lives,’ the Hollywood A-lister plays Rick Stanton, the British diver who helped lead the effort to save 12 boys and their coach who were trapped in Thailand’s Tham Luang cave.

In June 2018, the rescue of twelve boys and their soccer coach from a flooded cave in Northern Thailand captivated the world. Over the course of 18 days, thousands of volunteers, including more than 100 divers, helped in the effort to extricate the soccer team amid monsoon rains. Not surprisingly, Hollywood was enthralled too: Tinseltown’s best screenwriter couldn’t have dreamt up such a miraculous series of events with high stakes and a plot thicker than boxed mashed potatoes. Plus it had unexpected heroes at the center of it: a bunch of geeky, middle-aged dudes from England who spend their weekends cave diving.

Five years later, Ron Howard, the famed director of Apollo 13 and A Beautiful Mind, is releasing Thirteen Lives, a big-budget account of the rescue—it hit theaters on July 29 and will start streaming on Amazon Prime on August 5. The movie’s star? Aragorn, er, Viggo Mortensen, the Hollywood A-lister with three Oscar nominations. He plays a retired firefighter from Coventry, England, named Rick Stanton, who led the group of British and Australian divers who carried out the rescue. “These guys are the biggest nerds in the world and, at the same time, they’re all like Evil Knievel. It’s kind of a weird combination,” Mortensen told me over a press junket Zoom call. Mortensen’s career is dog-eared with daring, quietly strong characters, all of whom he spends months exhaustively researching. But transforming into Stanton was one of his biggest acting challenges yet.

Before he was at the center of one of the most publicized news stories of the decade, Stanton was already one of the world’s best cave divers. At the time of the rescue in 2018, he was 57 years old, had plunged to record-setting depths in the world’s largest caves, and had made multiple successful rescues and body retrievals in Mexico and around Europe with his diving partners, including John Volanthen (who is played by Colin Farrell in the film), Jason Mallinson (played by Paul Gleeson), Dr. Richard Harris (played by Joel Edgerton), and Chris Jewell (played by Tom Bateman). “From the cave diving community, there is such respect for Rick,” Mortensen says. “He’s a Zen master of this discipline. Nobody is more focused and more well-prepared to deal with the unknown than he is.”

Mortensen first learned about Stanton and his heroism when the rest of us did, glued to his television set watching the rescue unfold in 2018. When he first read the script, he was eager to portray a complex, brash man at the center of such an astonishing endeavor. And Mortensen knows how to fully commit to truthful portrayals of his characters. To become a Russian mobster in David Cronenberg’s 2007 film Eastern Promises, he traveled to Russia to read Russian novels and stayed in prison-gang-tattoo make-up while on set in London (and while frequenting a neighboring Russian restaurant, which, of course, completely freaked out all the diners). He got his open water scuba diving certification because of a single underwater scene in G.I. Jane, which eventually ended up on the cutting room floor. And he studied sword fighting so intently for The Lord of the Rings that legendary stunt coordinator (and former Olympic fencer) Bob Anderson said he was the best swordsmen he’d ever trained.

After he got the role, the actor applied his rigorous research methods to Stanton. Before shooting began, he spent close to five months talking to Stanton, building a rapport, and uncovering his quirks, including the slight variations of his speech. “He’s from Essex originally,” Mortensen says. “But he’s been living in Coventry for years, so it’s this sort of blended accent.” He read an advanced copy of Stanton’s 2022 book, Aquanaut: The Inside Story of the Thai Cave Rescue, in which Stanton describes himself as a grumpy old man with a life designed to avoid children and meaningless professional work. In the process, Mortensen started to grasp Stanton’s personality: gruff and confident, but devoid of hubris. “There’s a certain curtness,” Mortensen says of Stanton. “He’s not a man of a lot of words. He does things rather than talks about them.”

Those qualities were exactly what was needed during the chaos of the 2018 cave rescue. The Tham Luang cave in Northern Thailand is nearly six and a half miles of narrow tunnels and chambers that weave into the Doi Nang Non mountains. After the twelve boys and their soccer coach entered the cave to explore in mid-June 2018, unexpected monsoon rains fell without warning and flooded the cave with millions of gallons of water. When it was discovered that the boys and their coach never came out of the cave, officials called the Thai Navy SEALs to coordinate a rescue. Thousands of volunteers from all over Thailand (and a handful of other countries) arrived to help. They set up pumps, constructed dams, and tried to divert water any way they could. But it seemed hopeless. The water was so murky and fast-moving that the SEAL divers, who had little-to-no experience navigating flooded caves, couldn’t see more than a few inches in front of them. Navy SEAL Captain Arnont Sureewong (played by Tui Thiraphat Sajakul) died in an effort to reach the kids, and time was running out. So the Thai government contacted the only people who could possibly help: Stanton and his scruffy team of divers.

“Four middle-aged men wandering around with all this equipment and being the heroes of the day. How preposterous it must have looked from the outsiders looking into the rescue,” Stanton jokingly told me over another press junket call. “How preposterous was it that there was a 57-year-old man flown out from England to take part in this rescue. It does seem a bit far-fetched.”

During their Zoom calls, Stanton showed Mortensen photos and diagrams of the cave, the rescue, and his equipment, most of which Stanton had built and fabricated for years on his at-home lathe. “The equipment we use is very bespoke. It’s often homemade. It’s very esoteric,” Stanton tells me. “There’s a British phrase ‘men in sheds’—people who spend their time in sheds making things or inventing things. We are all geeky men in sheds who came forward and saved the day.”

Mortensen spent the winter before shooting began for Thirteen Lives at his home in Spain. To get a leg up on preparation, Stanton told Mortensen he could arrange a mountain cave exploration with some Spanish friends. Mortensen immediately agreed. He can’t recall how many watery miles into the earth they waded but far enough that he nervously wondered if anyone else was concerned about the cave crumbling atop them. “Then we get to this rock wall,” Mortensen recalls. “I said, ‘So, this is the end of the line.’ And my guide goes, ‘No, this is just the beginning.’” The guide asked if Mortensen was game to continue the dive. “I said, ‘No, absolutely not.’” But, the next day, Mortensen followed the guide into a longer underwater tunnel. “It gave me a taste for what we were going to do for the movie,” Mortensen says. “That was really helpful. The rock was the same, the conditions, the tight spots, the current, all that.”

When they finally met in-person on the film’s set in Australia, Mortensen learned Stanton’s physical movements. “I studied the way he walks, the way he puts on his equipment, the way he presents himself to others,” says Mortensen. “The way he sort of stands back and doesn’t offer his opinion unless it’s absolutely necessary.” Mortensen was even able to perfectly replicate Stanton’s slow, precise underwater swimming and breathing techniques, including his specialized frog kick in which his legs push water out rather than back and down so that no sediment is disturbed.

I couldn’t help but ask Stanton what it felt like to be portrayed by such a beloved actor, who just so happens to be stupidly good-looking. “It’s not going to do me any harm, is it?” he replied. All jokes aside, Stanton said he and Mortensen became friends over the months of calls and shooting, and he was impressed by Mortensen’s commitment to researching the role.

When it came time to film, Stanton was on set as technical advisor, working with designers, cinematographers, and the film’s dive supervisor, Andrew Allen, to ensure the cave and the rescue were depicted as accurately as if it had been filmed in Tham Luang (which wasn’t possible due to the pandemic). Though the set had to accommodate space for underwater cinematographers, director Ron Howard and his crew perfectly recreated the cave sections Stanton and his fellow rescuers said were the most difficult. Even the unshakable Stanton was in awe of the movie-making magic. “That is their craft, to be able to mimic what they see with uncanny accuracy,” he tells me. “The diving scenes, they do look like professional cave divers.”

However, for Mortensen, the set was a little too realistic. “There were times where it was so narrow, I said, ‘Rick, I can’t get through there,’” Mortensen says of shooting in the cave recreations. “And he’d say, ‘Yes, you can. Think about it. How would you do it?’” The answer: Mortensen would have to take the air cylinder off his back while keeping the rebreather in his mouth, push the tank through the tight hole first, and follow it, squeezing and wriggling his body through the rocky opening. Yikes.

It is this granular attention to detail that makes Thirteen Lives, and particularly Mortensen’s portrayal of Stanton, a triumph. Mortensen becomes Rick Stanton, one of the world’s greatest cave divers, a man who feels the hefty yoke of moral obligation and the burden of responsibility to save thirteen souls stranded in a cave chamber miles under a mountain.

At the end of our interview, I jokingly ask Mortensen if he’ll quit acting and become a full-time cave diver. “No,” he laughs. “I like being in the water, but I’d rather have the sky above when I come to the surface.”