“Most films are bad, but very bad novels are written and they are literature.”

Many thanks to Ollie and Zoe for translating the report from El Comercio about Viggo's poetry reading in Aviles on 14 January 2022. 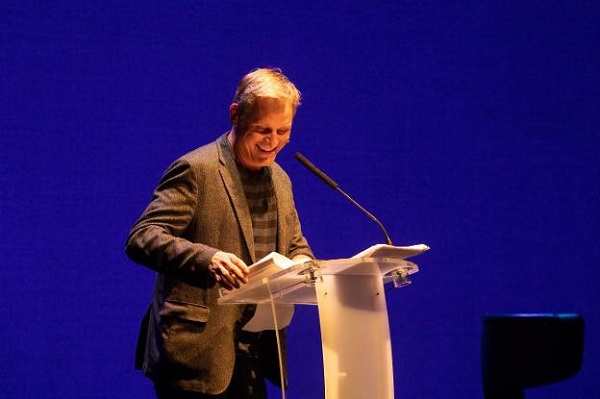 Almost a thousand people attend the Niemeyer for a poetry reading in Spanish by the actor and film director Viggo Mortensen.

by Pablo A. Marín Estrada

The North American actor Viggo Mortensen managed to bring together yesterday at the Niemeyer Auditorium the vast minority which Juan Ramón Jiménez spoke of (almost 1000 people, tickets sold out) to listen to his verse in Spanish and his opinions about poetic creation, an aspect of the actor who gave life to Aragorn in The Lord of the Rings that certainly is unknown by many of his admirers and that he has cultivated, almost in secret, in parallel to his artistic career. The author of various poetry collections like What Cannot Be Written (2018) and Eudaimonia, the New Yorker isn't prodigal with public readings and his recital in Avilés reached almost the rank of a world premier, according to the organizers of the Word Cycle. The writer and professor at the University of Oviedo, Javier García Rodriguez was charged with conducting the interview.

The North American came out on the stage demonstrating that stage presence works just as well for poetry, and while unfolding a disorderly arsenal of papers on the podium after greeting the audience, he fired off, in "captatio benvollentiae" style [trans.ed. A rhetorical statement to capture the good will of the audience], a casual "This is what I'm going to read, but don't worry. If I see you're snoring a lot, I'll shorten the adventure." It was not necessary. He managed to arouse the interest of the audience based on ingenuity, simplicity and intelligence in the reading of his poems and the pearls he was inserting. "One writes to try to understand what happens to you in life," he began by saying. And about the art of writing poems, "A poem is the record of a failure, a homemade bomb that can reach you," but also warning about excessive reliance on the thought-out word. "Poetry must be freed from poems and above all from poets," he said. He concluded his reading with a moving short elegy to his little dog Brigit: "That they let you keep on dreaming and forgive you for not paying attention to where your soul left."

His conversation with García Rodríguez ended up even juicier. "As a child, I began writing very short little stories; I wanted to invent stories like the ones in the books and I read them to my mother; it was a way of communicating with her. It's what I continue doing in some way," he confessed about his literary vocation. And about his own way of approaching writing, he revealed that "When writing a poem or making a film, to know that I'm on the right track, I need to feel free, abandoning myself to what comes out and then start refining, removing or putting in words like shots in editing a film. You have to alternate between disorder and precision."

The moderator wanted to pursue the cinematographic streak to ask him if a script was literature: "To me it is, but it can be very bad literature, because in general most movies are bad, very few are good. Also very bad novels are written and they are literature." He revealed some of his poetical references: Borges, Pizarnik, Cortazar ("His stories have a sense of humor and are very clever. I like that."), Walt Whitman and Leopoldo Lugones ("the Latin American Whitman"). There was also time for inside joking: "In Captain Fantastic, there´s a character who plays guitar, drinks mate and has a flamenco box drum. Was that your idea?" queried the moderator. "Not the drum box," he answered. He still had in reserve another pearl on the gift of the muses: "The poem is a lie but it captures something that is true."