As the crowning point of our Viggo-Works 10th Anniversary celebration, we are so very pleased to share with everyone, an exclusive interview with Viggo, done about a month ago. This is something that we thought would be impossible to pull off, but through Viggo's graciousness we, once again, have been able to ask him a few questions and get some quite remarkable answers. Some of these questions are ones that only a fan site would think to ask, which makes Viggo's replies all the more extraordinary. Our thanks to Viggo for making this possible and taking the time out of his (always) busy schedule to respond to us and help us celebrate our Viggo-Works 10th Anniversary.

What an anniversary present this is!!


• David Oelhoffen had obviously been working on the "Loin des hommes" project for quite a while before finances were secured for the filming. At what point did you become involved with the project? What were the challenges in portraying Daru? And was filming in Morocco more difficult for this film than they were for "Hidalgo"?

-A couple of years ago David Oelhoffen, through his producer Matthew Gledhill, approached me to see if I would be interested in portraying the Algerian school teacher 'Daru' in David's adaptation of Albert Camus' short story from 1957, "l'Hôte" ("The Guest"), titled "Loin des hommes" ("Far From Men"). They had seen me speaking Quebec-accented French in an interview, and wondered if I thought I'd be up to playing a character in that language. I have long been an admirer of Camus the writer and Camus the man, but I was not familiar with that particular short story from the collection titled "L'exil et le royaume" ("Exile and the Kingdom"). When I had read both the story and the screenplay, I realised that David'd expansion of the story was a very good one, and I said that I would be honoured to try my hand at playing the character. As with most worth-while movie projects, it took a while to get the financing together, but we ended up making a very good movie, very true to the spirit of Camus, in my opinion. Shooting in the Atlas Mountains was not any harder than it needed to be. It was as cold and beautiful as we needed it to be most of the time, except at the start of shooting when it was a bit too warm. The look and feel of the movie is always wintry, though. Reda Kateb, a very fine French actor of Algerian descent, was my partner, playing the role of the prisoner 'Mohammed'. For my role I had to speak Arabic as well as French. It turned out to be a bit more of a challenge to get rid of the more nasal sound of my normal French than it was to learn to speak my Arabic lines. In the end, I believe both languages worked out well.

• You've said that you create a back story for your characters from the time they were born. In "Everybody Has A Plan" you play twins - which one did you consider to be the firstborn? And why?

-The character of 'Agustín', the Buenos Aires middle-class doctor, seemed the older one always, perhaps because he seemed more socially responsible. In the end, if you have seen Ana Piterbarg's movie, however, you will have seen that 'Agustín' has just as many social problems as his brother 'Pedro'.

• When it comes to creating a character's appearance is there anything you particularly dislike having to wear (e.g. wig, contact lenses, prosthetics etc)?

-No. I'll do just about anything to get the particulars of any character "right", and usually end up enjoying all aspects of that exploration.

• Why did you decide to set up Perceval Pictures and where do you see it going in the future?

-To help produce "Loin des hommes", "Todos tenemos un plan", and Lisandro Alonso's new movie, which we shot in Argentina last year. In future, I may try to produce other projects, perhaps an adaptation of Mari Sandoz' "The Horsecatcher" from scratch. We'll see. 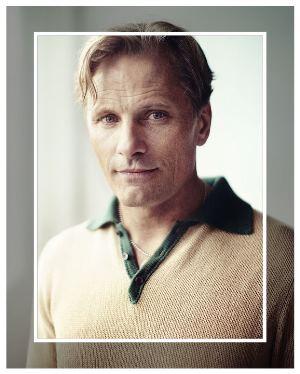 • Is ACÁ the soundtrack for Jauja?

-No, it is not. One song on it is partly inspired by our collaboration, but the CD is basically a story about travelling up a mountain stream through a period of late winter into early spring. There will be two tracks in Lisandro's movie that I did produce, however, in which Buckethead plays some beautiful guitar tracks.

• You were a producer for Everybody Has A Plan and, more recently, Jauja - how much does being a producer add to your workload? Does it allow you to have more input as to how the finished work turns out?

-It depends on how competent and organised the other people involved in the project are. It does involve some added responsibilities to my acting work, but I am happy, in my capacity as a fellow producer, to help the director get his vision onto the screen and to do what I can to see that the movie is properly presented to the public.

• In an interview you said that "The Horsecatcher" is a universal story and that you "could transpose it to an inner city and have instead the pressure to take drugs." Does the script you have been working on place it in a modern setting or are you staying faithful to the book?

-I am staying faithful to the book. It takes place in the 19th century and there are no Europeans or people of European descent in the story. 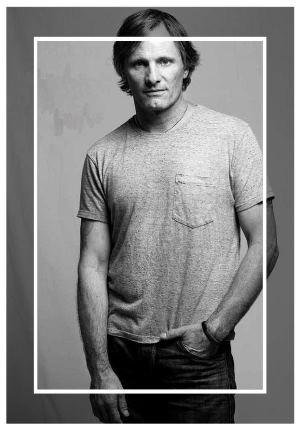 
• Are there any other books (if you could obtain the necessary rights) that you would like to film in the role of director?

-Not yet, although there are many gems out there that have not been made into movies.

• You narrated The Path Of The Condor and, more recently, you have narrated The Little Prince. You also contributed to The Wasteland app. How did you get involved in these projects and would you like to do more narration work in the future?

-I was invited. I wouldn't mind doing more narration. It is an enjoyable way to participate in story-telling.

• Do you have any plans to return to the stage? And which country (or countries) would you like to perform in?

-I'd like to play a role from Shakespeare in England. But could be a newer play as well.

• Is there any Shakespeare character you would like to play (that you haven't already)?

-Timon of Athens, Coriolanus, Macbeth, to name a few, but there are many interesting roles that I would imagine I could play. Even Hamlet, in spite of my age, if I could.


• Are you working on any new literary pieces of your own … poetry, prose, photography … that we can anticipate coming from Perceval Press in the next year?

-Photos, poems, drawings. Not sure when I will have something ready. Perhaps a book of photos with some new poems scattered throughout, like I have done in the past, could be ready this year.

• Do you still create any visual arts like paintings or drawings?

-Drawings, and hope to get back to painting when I move to a bit larger home later in the year.

• For a couple of years you've mentioned the possibility of a photographic exhibition – is that still on your agenda and, if so, in which city is it likely to be held?

-No idea at this point, but hope to do one tied to a new book, when that is ready.

• Your blog at Perceval Press always contains so many interesting political and social viewpoints. What do you see as the top three or four worldwide issues before us at this time?

-Climate change, hunger, greed, and, above all, war, an issue that is connected to and feeds the other three. 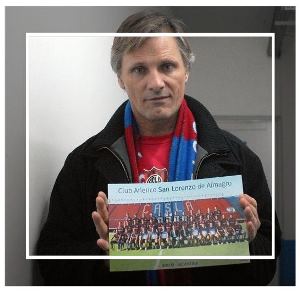 
• You've filmed in England several times but we've never seen any evidence that you have adopted an English soccer team, unlike when you've been filming in other countries and have usually found a team to support. Do you have a preference for a particular English team or are you simply overwhelmed by the choice provided by the various English leagues? And have you had the opportunity to go to any matches when you've been filming in England?

-I've been to see Fulham, Tottenham, and Arsenal in their stadiums over the years. I like Fulham, the oldest Premier League team, I believe, and one of the world's oldest football clubs. They have colours similar to Istanbul's Beşiktaş, a club I am also fond of.

• What are your views on the introduction of goal-line technology?

-Long overdue. Obviously this was not feasible back in 1966, when Germany was beaten by England in the final thanks to a goal that should never have been allowed, but many injustices could have been avoided in recent World Cups as well as Champions League matches -not to mention every league of any size or age-group for men, women, girls or boys anywhere in the world- if FIFA had incorporated the technology in a timely fashion.

• If you could go back in time, where would you go and why?

-It is difficult to choose any one place or time. The more one learns about history, archaeology, biology, and other disciplines, the more one becomes fascinated with all sorts of eras and locations. If I only had one choice, however, and had to choose between a made-made environment, no how dazzling a place it might be, and wild nature, I would always choose a place untouched by humans.


• We've read about how much you love gardening. What do you grow?

-Depends on the climate and the amount of sun the place gets. Lately lots of flowers, from spring perennials to roses. I try to always have mint, basil, rosemary and other herbs and aromatic plants going. In the past I have also had big vegetable gardens, and have planted hundreds of trees over the years, hardwoods, citrus, cherries, apples, plums, pears, apples, pines. Also have had grape vines. I like a good vegetable garden, encircled by wildflowers. It is very satisfying work. Maybe when I one day get back to living in the country again I will be able to start another big garden like the ones I've had in the past.

• We know that you have seen the two instalments of "The Hobbit" that have been released so far – what are your views on the films and how the story and characters have been treated.

-I've enjoyed seeing the first two installments of Peter Jackson's adaptations inspired by The Hobbit, even though I was sometimes distracted by the liberties taken with Tolkien's story. I suppose it was necessary to come up with a lot of new entertaining material in order to expand into three long movies what is a much shorter book than The Lord of the Rings is.

• Just for fun … what is your favorite comfort food?

-Hard to choose one, but I can give you four off the top of my head: pickled herring, strong cheddar cheese, dark chocolate, and salted almonds. 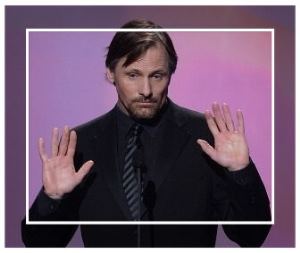 • Name six historical figures you would like to invite to a dinner party.

• And what would you cook for them?

-I would make a giant salad from my own garden, provide good home-baked bread, and, too be safe and not offend anyone, a big rice dish with options of meat and vegetarian, with lots of hand-picked forest mushrooms in both. Also oven-baked potatoes, carrots, garlic, turnips, onions. For those interested, I'd provide fresh-caught wild rainbow trout and salmon, grilled with a bit of lemon, olive oil, salt and pepper. Blackberries, raspberries, thimbleberries, blueberries, huckleberries, apples, plums, wild grapes, and whatever else I could find in my ideal orchards and surrounding forest. Lots of good water from a spring, and plenty of red and white wine from Spain, Argentina, Italy, France, and New Zealand.

Our thanks, once again, to Viggo. Here's to another 10 years!