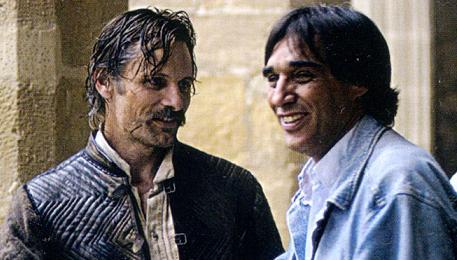 Our thanks go out again to paddy who this time gives us a small piece of the CITIZEN K ESPANA article, translated to English.
Quote:
CK: What did Viggo Mortensen provide the film?

ADY: Everything; absolutely everything. In Spain, because of the tradition of our cinema, we don't have action heroes, and Viggo combines an impressive physique (that "exact image of the weary hero" that Arturo wanted) with the fact of being a spectacular actor of action (films). He's an extraordinary actor in dialogues, in everything...he has that combination that it's so difficult to find here. Viggo has been the vital centre of the film. The title of the movie is "Alatriste"!!. His experience, his help and his advice have also been very important.

CK: And with the consent of Victoria Abril and Penélope Cruz, what's the difference in working with the big stars of international productions?

ADY: None, although Viggo represents that "other Hollywood". Some people I know who have worked with some big stars haven't spoken well of them at all, but I have to admit that, although at first I was a bit worried, it's very easy to work with him. Generally, until you start to shoot, everybody is very polite and very friendly. But Viggo is very nice before, during and after shooting. It's almost impossible to think of him as a Hollywood star, even though he is. He's meticulous, very professional, and he has that knowledge of cinema "from the inside", a bit like Victoria Abril. Besides being actors they are scripts, editors, photographers...they know all that, indeed.