By Gloria Scola - translated by Ollie, Remolina, Rio and Sage

Source: Pantalla Semanal
Nominated in 2008 for Eastern Promises, the man from New York is back with The Road, a journey through an apocalyptic world. 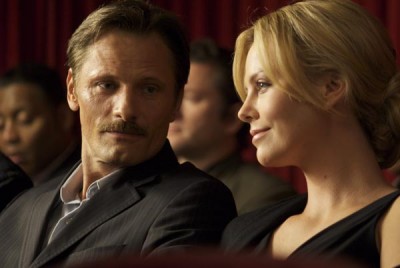 Image Macall Polay.
© 2929/Dimension Films.
Viggo Mortensen speaks Spanish perfectly (with an Argentinean accent), because he lived as a pre-adolescent in many Latin American countries. But he asks for the interview to be in English. And his accent in that language is also atypical. He's 51 now, but he made his debut at 26, as an Amish farmer in Witness, starring Harrison Ford. Since then, he has taken part in more than 40 films, among them the biggest blockbuster trilogy in history: The Lord of the Rings. Now he's back with The Road, a film in which he travels with his son through a devastated world.

The film is based on the novel by Pulitzer Prize winner Cormac McCarthy. What did you think about the story when you first read it?

I was as moved as many people were around the world. This book has a huge universal appeal, because, besides the fact that Cormac McCarthy is a great writer, the concern that the father feels for his son is understandable in any culture. The reader and the viewer ask themselves: "What would happen to this boy if he were to lose his father?" They don't have any shelter or food... and all there is are a lot of people ready to hunt them because they are the only meat they can find.

And why did this post-apocalyptic situation come about? The film doesn't explain why the world was destroyed, but neither does the book.

No, but McCarthy himself has told us that it is completely irrelevant to know how it happened. The starting point is so simple: they are two people walking through a devastated landscape. Nevertheless, from the emotional point of view it's very complicated to work out how the two of them get along. What are the moral decisions they have to make along the way? There are certain moments when the boy gives the man a lecture because of his contradictions, for asking him to behave in a certain way and then doing just the opposite.

The boy's mother, played by Charlize Theron, is she inconsistent too?

I think her decision is better understood in the film. Though my character doesn't agree with her, and it could be the audience also doesn't agree, one understands her decision not to go on. I think she wants the father and the boy to have the opportunity to save themselves.

Did you lose weight to play this character?

Yes, at first, and for that you have to stop eating and, when you don't eat, you start to think differently. In any case, it's a matter of autosuggestion, of being carried away by your faith in what it means to be an actor. The worst thing was that during the shooting I continued losing weight. I think it was due to the nature of the story.

And what do you have to say about those unhealthy teeth you displayed in the film?

They aren't mine. (laughs) But for your information, I brushed my teeth every night and also every morning, before work. They put disgusting things on my face and we were so slovenly, so dirty; we were cold at night... We spent a lot of time outdoors, in nature, but you get used to it. Sometimes all that helps you get into the character's emotions.

Have you experienced the feeling of being homeless before in order to make your acting more realistic?

During the promotion of my previous film, Appaloosa, we traveled a lot, so I paid special attention to the homeless. Some of them wanted to speak to me, others wouldn´t... I learned that if you live in the street you know that some would try to steal from you, also you don´t want to be cold or get wet; you want to sleep in quiet, not to be attacked...And all this is very similar to what we experience in the film.

What do you like most about being an actor?

Exactly that. That the different characters bring you to situations where you end up paying attention to things that you normally wouldn't pay attention to.

And would you rather let go in front of the camera, following your instincts, or remain in control?

There are moments. Some actors say that the best way to reach intensity is to stay fresh by not rehearsing, but I don't agree with that. I think being in control is much better: you understand the story, the surroundings, the scene, what went on before and so, if the dialogue suddenly changes because the script is rewritten or the other actor has made a mistake, you keep on acting in character. And, although sometimes you can be out of control, I don´t think that´s the way it has always to be. If anything unexpected happens you need to be ready to do something.

Did you think of your own son while making the movie?

Very much. The character in The Road is a special child; he needs to be. Being an only child and with that imagination, he's the one who becomes the moral compass as the story progresses. At the end the child is almost the teacher. All that made me think of my son a lot, and when I read the script and the book, I said to myself "OK, I´m going to do this part." And my son was a reference point.

And as he grows older, have you lost that?

No. It just happens that we spend less time together. Now he is in his last year of college and I'll go to see him; he lives in New York. We are dealing with some family matters together, helping each other. Now he sees the history of the family from a different point of view.

Lastly, the cinematographer is a Spaniard, Javier Aguirresarobe; what was it like to work with him?

Excellent. He is a master. During the filming he played jokes on Kodi Smit-McPhee, the actor who plays my son in the movie. He would say to him in Spanish: Qué pasa, chaval? (What's up, kid?) And the boy would reply in Spanish: Voy a dar un paseo. Quiero un chori-pan. (I'm going for a walk. I want a chori-pan.) A chori-pan is an Argentine sandwich. His work in the film is excellent and a great part of the credit goes to him.