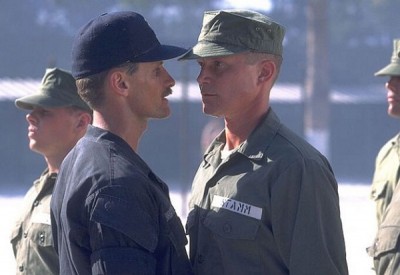 © Hollywood Pictures / Trap-Two-Zero.
The other day I came across a Mad Magazine. For the first time I felt like I had arrived when I saw a GI Jane parody of me called GI Shame. [Laughs] My favorite part was the idea that the candidates were dropping out of the SEALs not from the physical abuse but from my awful poetry readings. - Viggo Mortensen 1998

For the role of Master Chief John Urgayle, Scott wanted "somebody fresh and new." He did not have to look far. "I'd had my eye on Viggo Mortensen since seeing him in Indian Runner. It was a very dark movie, but he was a very interesting presence. Then my brother Tony used him in Crimson Tide."

"I just met Ridley and got the job," confirms Mortensen. "It was flattering to be cast without any apparent hesitation on his part in such an important role. I am very grateful to him." Creating his antagonistic, hard-driving character was more of a task. In order to accurately depict the Naval Special Operations training practices, Mortensen went to the naval base in Coronado, California, where he watched the actual training and talked to as many active and retired SEALs as he could. Describing the character he finally developed, the actor says, "I am the law and all must obey or suffer the dire consequences."

'The quality that really stood out to me was his quietness,' says Ridley Scott, who cast Mortensen in GI Jane as the Navy instructor who makes life miserable for aspiring SEALs, including Moore. 'He has a still, modest quality to him that was perfect for these guys. I noticed that in some of the movies I'd seen him in, and he also had it in real life.'

For Mortensen's first scene, in which his character addresses some 40 prospective SEALs, Scott was looking for something more unusual than a normal drill instructor's spiel. Mortensen brought in a short D. H. Lawrence poem ('I never saw a wild thing sorry for itself...') that the director says showed richer and more intriguing sides of a character whose ensuing act of violence are so horrific that many viewers may not get past them. The poem, in fact becomes a crucial part of the film. For a key scene in which Mortensen's character gives a copy of the book to Demi Moore's character, the actor used his own dog-eared copy.

'In the same way, it was I who suggested to Ridley Scott the use of a poem by D.H. Lawrence for the introduction scene in "GI Jane'. This reference gave my military character another dimension. It made him a lot more original, it was also my way of making him less misogynist! And the book which I give to Demi Moore, in which there is that poem, it was mine, all battered, really old ...'

'He is absolutely dedicated to the process,' says Ridley Scott. 'He was constantly revisiting me with questions and notes and suggestions, none of which I ever got tired of.'

'The other day I came across a Mad Magazine. For the first time I felt like I had arrived when I saw a GI Jane parody of me called GI Shame. [Laughs] My favorite part was the idea that the candidates were dropping out of the SEALs not from the physical abuse but from my awful poetry readings.'

"She actually got me in the balls a couple of times," he recalls with a laugh, "but it was unintentional, I'm sure." The actor expresses regret that GI Jane's sexual politics sailed over the heads of the cineplex crowd. "A lot of people thought [my] character was just a sadist," he laments, pointing out that the master chief is arguably doing the honourable thing in treating Moore as harshly as he would one of the male candidates.

His work in GI Jane was brave - he brought understatement to the kind of role that offers grandstanding opportunities on a silver platter.

'The profile of the average survivor of the underwater demolition training is a guy like me. Not a big guy, they're not big monsters, you know, "cause it's really more about mental toughness. It's like, in spite of being exhausted, wet and cold and tired and injured and browbeaten and all that, you stay focused on your objective."

It would be all too easy to imagine a story of spiteful male Seals and slow-burning sexual tension, but ''G.I. Jane'' doesn't much bother with that. Moments like Jordan's first appearance in a tight T-shirt and her shower- room confrontation with a commanding officer are interestingly underplayed.

So is the pivotal role of her commander, known as Master Chief and played with cool, charismatic aplomb by Viggo Mortensen. The role, as underwritten, becomes fascinatingly ambiguous in its mixture of veiled sadism and unconcealed patriotic fervor.

Urgayle is an intriguing character, played by Mortensen to suggest depths and complications. In an early scene he is discovered reading a novel by J.M. Coetzee, the dissident South African who is not on the Navy's recommended reading list, and in an early scene he quotes a famous poem by D.H. Lawrence, both for its imagery (of a bird's unattended death) and in order to freak out the trainees by suggesting a streak of subtle madness.

The most refreshing performance is by Mortensen as her commanding officer. He espouses the usual military-sadism spiel, including excusing apparent cruelty with the explanation that it saves lives. Mortensen, who appeared in Portrait of a Lady and Crimson Tide, has rarely looked so sleek, appealing and ready to play romantic leads as he does this time, gleaming out from behind a clipped mustache and a dangerous attitude. This ought to launch his career into the highest spheres.