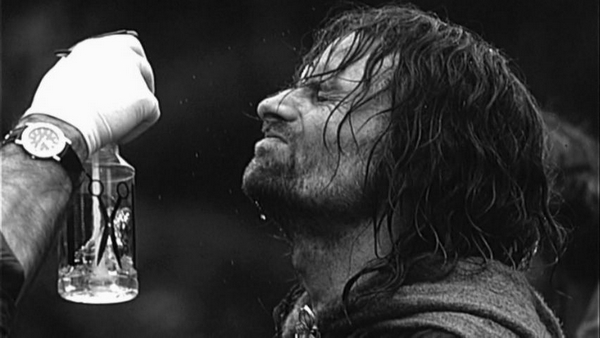 'I really don't know what happened myself, but I lost myself completely in the role. I am a man who likes to withdraw into solitude and take long hikes in the woods and mountains. So was Aragorn. We fitted perfectly together.'

When you see in the movie that I am tired; I was tired. When it looks like I'm cold; I froze. When I was smeared in mud; it was mud.

'We were dirty, freezing cold or dying of heat. We were really uncomfortable. That was the beauty of the project. I felt like it was true.'

In one take, Mortensen was battling an Uruk-Hai, a powerful and ferocious strain of orc, when a blade that was jutting from an extra's armour slashed into his face. "I thought, Oh my God, he's lost his face," recalls Perez, who then saw that the blade had somehow missed Mortensen's flesh but split his tooth - literally in half. "I said, 'You lost half a tooth.' And he looked at me and said, 'Look for it. You can stick it on with superglue.' And I said, 'No, come on, don't be silly, you can't.'" Mortensen finally relented and went to a dentist's office, still in full battle armour.

"On the fifth take, Viggo kicked the helmet, screamed, clenched his fists and dropped to his knees. I thought he was just doing some powerful acting. But then I noticed after I said 'cut' that he wasn't saying anything. Finally, he did the next scene limping."

Once they had finished filming, Jackson made the actor take off his boot.

"His toes were broken. Normally, an actor would yell 'ow!' if they hurt themselves, and stop the scene. Viggo turned a broken toe into a performance that's a great moment in the film."

"We were on the Greenstone, the river that flows into Lake Wakatipu, and I was being filmed floating down the river. I went off course. I got caught in a current, and I got stuck at the bottom. I had the sword and the cloak and all the wool and the boots. That was one time I was really scared. I was just about on the verge of passing out. I guess I must've kicked against a rock because I kicked out of the current and popped up."

"It was very important to me to make everything as believable as possible. That's why, even when I was exhausted, I always fought with the [heavy] steel sword rather than the lighter one," he explains. "I wanted to make sure the fight scenes were realistic. I shouldn't be able to just throw my sword around like Errol Flynn did, especially when I'm really tired. It should be hard to fight with it! Even when I was just walking around, I'd still wear the steel sword because it was heavier and it affected the way I moved."

On the bonds formed between the members of the Fellowship: To be honest I kind of connected with whomever from the Fellowship I was working with. My friendships were mainly forged at work because that's where I was most of the time. Every day was a new deal depending on which of the three movies we were working on and what group of people I was with. I used my precious time off to hang out by myself and recharge. Month after month of being around tons of people all the time, no matter how much you might like them, that's just not something I'm used to doing. It was like a family, but sometimes you just needed quiet.

"For our love scenes, he would come to me the night before and say he wanted to change all the lines to the Elvish language. He was trying to make that connection stronger, and I thought it was beautiful that they'd speak Elvish to each other because it adds a layer to their history that you wouldn't otherwise see."

I didn't really have days off, so I was forced to immerse myself in it. So much of the movie is not special effects, but a real, natural environment, so I thrived on that. The character I was playing was someone who had not only an affinity for living in the wilderness, but by necessity had to be good at it. That was my way of getting comfortable, especially not having a lot of time to prepare. I enjoyed being in the woods.

You had a note above your mirror that said 'Adapt and Overcome'. What made you write that, and how did it help you get through The Lord of the Rings?

I heard those words from one of the guys who had trained me early on with weapons and it just seemed appropriate. It was true throughout shooting - you had to adapt to the weather, or scenes that changed or were rewritten that day. Just like in the story itself, there were constant surprises to deal with and just when you think you've achieved some victory, some greater obstacle presents itself. It's like some ridiculous video game that gets worse with every level.

'It's always good when the crew likes the story and it's not just them working for a pay cheque. It was a crew that was on board for a long time, and stuck with it through pregnancies, deaths, divorces, marriages and injuries.'

"There was virtually no distinction between stunt players and extras and principal actors. We were all in that same soup, and we were all exhausted and sick."

"There was such amazing commitment to this movie, despite the exhaustion, the intensity and everything else that was going on. I think you can feel that coming off the screen; you can feel the emotion and the effort that's being made," he enthuses. "I think it's so powerful because aside from the great special effects, it's also very human. You can sense the values of the people involved, the group ethic, their imperfections, the emotions, exhaustion and commitment. In 20 or 30 years from now, some of the special effects will still hold up but what will always hold up is the intention, feel, emotion, commitment and that palpable intensity."

"One of the most valuable things I've been reminded of is the value of compassion. The importance of mercy. Especially towards people that you don't understand or you have differences with. Understanding that even the smallest person matters. Let's say we're sitting in a restaurant and we're talking about compassion and humility and how bad prejudice is, and the waiter comes over, and you say, 'go away, we're busy talking, can't you see that?' you've blown everything you just said. So it does matter how Merry and Pippin talk to each other. It does matter how I treat my son. It does matter how I deal with a waiter or anybody. It's what each person does and how they react, that's what makes community, what makes a society. It's obvious, but what else is there? and that's what the story tells you."