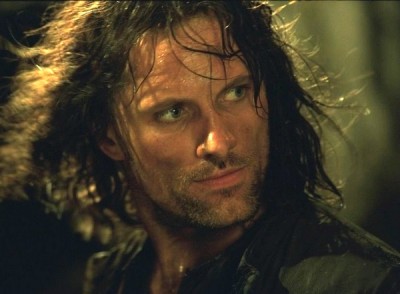 We knew we were blessed in having Viggo - who is part-Danish descent - step into the role of Aragorn when he arrived carrying a copy of the Volsunga Saga that he had taken from his bookshelf! Viggo not only has an actor's sense of bringing his character to life, but also an innate understanding of 'the warrior code' and Tolkien's philosophy of heroism.

Philippa Boyens
The Making of the Movie Trilogy

"I started reading the Tolkien book on the plane the next day, and about an hour into it or so, I started to see the first signs of things that I recognized: archetypes and storylines, particularly from Nordic sagas. . . . That put me somewhat at ease, and realizing that I was going to get to be part of this saga and be some sort of Viking warrior - a heroic character with all the flaws and self-doubt that the best of those saga heroes had."

'Ultimately, you create your own luck. Fate does step in. When we ended up with Viggo, fate was dealing us a very kind hand. Viggo, in hindsight, was the one person who was perfect for this film. He came out of nowhere, and suddenly there was Aragorn.'

Peter Jackson
The Lord of the Rings: The Untold Story
By Ian Nathan
Empire
December 2004

And Viggo came on quite late. I'm sure you were designing for Stuart Townsend then?

It was terrifying. I didn't know Viggo. It had been a pretty difficult time working with Stewart and the original design for the costume of Aragorn - the costume when working with Stewart went through a number of radical changes. At the very end of that process, it became again the original costume. And that's only something you discover when you find those old drawings again.

It was something that I really loved. And suddenly, they were like, "Well, Stewart's gone - now we have this guy." So the week before shooting, Viggo walked into my covered wardrobe dressing room and neither of us was saying very much. He's a very quiet person and sometimes I'm a very quiet person - particularly over issues like that. We were like, "I'll get you to put this on and we'll see what happens."

I was standing there and my heart was in my mouth - I was willing to start the process again because I know how much it matters. You cannot act a role like that without feeling like you were in your second skin as that character. And I was certainly prepared to do it, but there was a part of me that was knew we were knee-deep in trouble.

Viggo paced up and down and said, "Do you think we could just put a few more ties on these boots?" And in that moment - I had known the first time he put that costume on that it was ten times better on him and that was actually to do with the amount of - just Viggo's experience and age and life. He imbued that costume with its own life. The terrifying thing for me was that I might have an actor who simply wanted to get rid of it, but he did not do that.

He just wanted to add to it. I was in love with Viggo from the beginning. (laughs)

Who knows, perhaps it was because [Viggo] washed and repaired Aragorn's clothes himself that he so perfectly came to inhabit them-to a point, indeed, where the costume seemed almost to blend with his body. [pause] You know, I really do think that particular costume is incredibly beautiful. It seems funny, perhaps, to talk about something that is so worn and broken down, so darned and patched, as being beautiful-but it is to me.

Ngila Dickson
The Making of the Movie Trilogy

'When Viggo came in, he fitted the bill perfectly as Aragorn, and he also had great ideas. When he picks up the Hobbits in the first film, he has this small hunting bow and arrows, like someone who lived in the wild would have. But that's not something we had ever thought about designing for Strider. That was Viggo's idea. He came in and started talking about the character, and said, 'If I live out in the wild, I'd have a small hunting bow for catching food. It would never be a big deal, maybe you'd just see it while I'm making a campfire.' We said, 'Yes that makes complete sense, we didn't think of that, so let's make you a bow'. It was always great to have those kinds of discussions with the actors.'

Christian Rivers
Hail To The King
by Lawrence French
Starburst #305, 2003

I didn't envy [Mortensen] when he arrived. Viggo walked into a very tense situation, threw himself into his role amazingly and quickly won the respect of everyone on the crew.

Recalling Viggo's first day on set: The filming was going on at the far end of the [Prancing Pony] set when I noticed this figure in a dark hood, smoking a pipe, sitting in another corner of the set altogether. Then I realized: it was Viggo. He wasn't required in the scene, he was just sitting there, observing the vibe, he was actually being Strider, being the outsider, the lonely man in the corner that no one spoke to.

How do you 'dive' into fight scenes?

Well the first day I met the fight choreographer, Bob Anderson, who's been around a long time - he taught Errol Flynn to fence and represented the UK at the Olympics. I went into this room and there were all these stunt people standing there and screaming and yelling. He had them all pumped-up and he stood me in front of them and said "Okay, go!" And they all started running at me, and I was like, "Holy shit!" He said "stop" and they all stopped. Then he told me: "This is what you're going to be dealing with so let's get to work..." He gave me a sword and it was just, like, crazy for two days. The first thing I did on camera was swordplay and I liked it. It was fun.

The first thing I had to do was a swordfight [the confrontation with the Ringwraiths on Weathertop]. Even before I spoke a single word of dialogue, I was forced to confront the physicality of my character. It was probably helpful to do something physical before speaking. More than for any other character, Aragorn's actions speak for him. His choices, the decisions he makes, his physicality, his body, tell you a lot about him. He's a man who throws himself into situations. Which is why it was good to begin my work with a swordfight.

"I'm still shocked that that was the first thing he did," says Wood, who had an early dinner with Mortensen during which he found him hard to talk with. "But when he started working, there was no question. This was Aragorn, this was the man who was meant to play this role. We had an immense amount of respect for him being able to jump in so quickly."