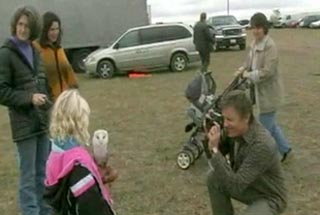 Even young Heidi Hayes, whose parents run The Central Ontario School of Falconry, got into the spirit and to surprise Mortensen on his birthday, brought her pet barn owl, called Lucy, to set and showed Mortensen how to place it on his gloved hand.

Throughout the shoot, each time Mortensen went to visit his mother, he'd purchase T shirts sporting various types of fish logos, swimming in turbulent streams. On each visit, he purchased more until soon, nearly the entire crew was garbed in fish T shirts. Fish Fridays became an event. But the fishiest event took place for the crew group shot when Mortensen and Bello presented boxes of fresh fish so various crew members could hold the red snappers up for the camera, gingerly clutching them between thumb and forefinger. Mortensen, usually unassuming, flourished a flounder the "big fish." It was all a bit whiffy, but a wonderful indicator of the camaraderie which prevailed throughout the shoot.

During production on David Cronenberg's thriller A History of Violence last fall, Viggo Mortensen carried around a fish--a 12-inch, anatomically correct plastic trout. It was a peripheral prop, a toy brought in for his character's young daughter, but Mortensen decided to adopt it as a secret talisman of sorts. Every day, he tucked it into his back pocket, his cowboy boots, his bag, anywhere that was out of Cronenberg's sight. "It was like a compulsive thing after a while," the actor explains. "I felt like it was unlucky not to have the trout, so I would sneak it in. It became this game to see if I could keep getting away with it." He did--until the last day of shooting, when his finnish friend fell out...on camera. Says Mortensen, with just a touch of mischievous pride: "David saw it and was appalled."

'I had a running joke with the crew of the movie "cause I'm a Canadians fan, ' he says with a hint of glee. 'I was raised in northern New York on the St Lawrence across the river from Kingston and I always liked Montreal. I made the mistake one day, I wasn't thinking, and I walked in wearing a Montreal T-shirt. The crew saw me and said "Holy sh-t, whatya doing!' And then I realized, God, all these guys are wearing f-ckin' Maple Leaf caps every f-ckin' day.

'So every Thursday I didn't just wear a Montreal T-shirt, I wore a red Montreal hockey jersey.'

"It became a classic Viggo issue. He was really upset,' Cronenberg recalls, remembering how the posters were promptly changed to reflect reality. "He's not afraid of what he is.'

Cronenberg on the airbrushing of Viggo's scar out of the posters.
Eats Roadkill, Speaks Danish, by Amy Wallace
Esquire magazine
March 2006

One last thing that I wish to report is a small anecdote concerning someone. One of my charming girlfriends, attached to the press core assisting all of the DVDrama personel, yesterday was herself helped by a hero and not the least of which since it was Mr. Viggo Mortensen, alias the sensual Aragorn of the Lord of the Rings, about whom we are still having numerous fantasies since the first showing of Peter Jackson's trilogy. Present in Cannes to support David Cronenberg's film, A History of Violence, in which he proves once again his immensity talent, he went to the private evening gathering that followed the premiere screening, which was exactly where my girlfriend was, whose dress suddenly caught fire as she walked down the centre of an avenue edged with small candles. An accident which could have transformed itself very quickly into a catastrophe if the courageous Viggo hadn't intervened immediately, gently throwing himself on her to help extinguish the first flames that could have become a conflagration. Reassuring and concerned he next took lengthy care of her. After this summer the King of Tolkien, Viggo, is today the King of Cannes and I regret not being the one of whose dress caught fire!