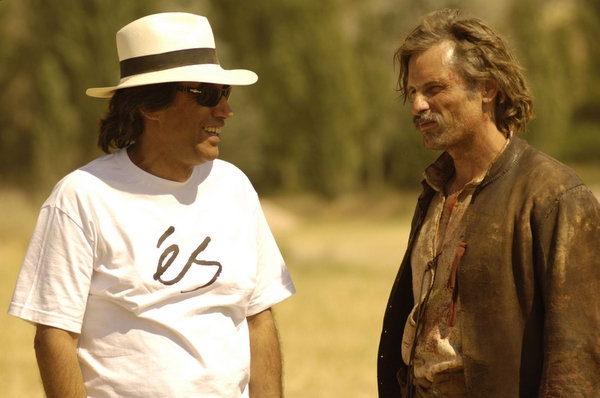 "I wanted to be Alatriste at any cost."

"...he's got the age, professionalism, look, body and he's one of the few action heroes in modern cinema."

Agustín Diaz-Yanes
Viggo Mortensen Will Be A Splendid Captain, by Gontzal Díez, The Truth of Murcail, Feb 19 2004

It is the return to the big screen of the king of swords in modern cinema in a film that summarizes the five novels published on the character.

At the beginning, Pérez-Reverte didn't imagine his Alatriste embodied by Viggo Mortensen. "No, I didn't, but once I've talked to him, I'll never be able to see Alatriste with another face than that of Mortensen. Obviously, he's going to be characterised and so, but Viggo is an actor with a very intense look; you must take into account that Agustín (the director) has chosen Viggo for his look. Alatriste is a fellow that looks in a way...his look is a look that frightens, is a look cold and hard, and the look of Viggo is impressive, he has a look that captives the camera. That look of Alatriste... the audience is going to forget anything else about Alatriste and remind the eyes of Viggo, that are the eyes of Alatriste"

Arturo Perez-Reverte, 'father' of the printed word character, assures us that Viggo began to appear to him to be the appropriate person to interpret Alatriste from the moment he saw him torturing Demi Moore in G.I. Jane.

"I didn't know Arturo Pérez-Reverte's novels. Long ago, I had worked in Spain with Ray Loriga, in "My Brother's Gun". One day, Ray told me he was going to be in Berlin, where I was promoting "The Return of the King", by Peter Jackson. Loriga went with a friend, Tano (Agustín Díaz Yanes), who brought a script that he gave me to read. I liked the plot as a tale, as a story. And it captivated me. So I decided to do it, against everyone and against everything."

Interviewer: How did you manage to convince such an international star like VM, who had just worked in the succesful LOTR, to play the lead in the film?

Díaz Yanes: It was very easy. I didn't know Viggo, but Ray Loriga is a good friend of him, and he [Loriga] is a close friend of mine. I thought in Viggo because this is a very high-budget film and he fulfilled two basic things: he looked like Alatriste and he was a Spanish speaking star, for something was clear to me: I'd had never made this film in English. So Viggo fulfilled all requirements. Ray Loriga passed him the script and it happened that Viggo had watched my two films and we went to Berlin and met him. He liked the script a lot and said yes at once.

"Some people in Spain thought it was strange that I came to do this story. In the United States, some people asked me why I was going to do this. I answered them that the script was very good, that it was the best thing I had ever read; that not only did I like the story of Alatriste, but also the period. It's a valuable project, an interesting character, a historical period that is very unknown outside the academic world. '

The incorporation of Agustín Díaz Yanes, also the author of the screenplay created from Arturo Pérez-Reverte's five novels, gave the definitive enthusiasm to the project, which became gigantic when Viggo Mortensen, a movie star who speaks Castilian, gave a quick 'yes'. It was then that Tele 5 - Picasso Studios, Alatriste's other producer, together with Origen (Antonio Cardenal) and Universal Studios decided to take the film to a greater dimension than originally envisioned.

'Without Viggo this wouldn't have been built up ever. Viggo could have done any film, especially after The Lord of the Rings. He fell in love with the project. He insisted on it and this could be done thanks to him.'