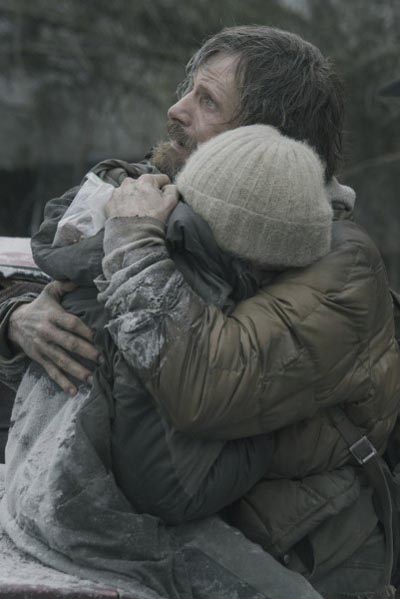 Image Macall Polay.
© 2929/Dimension Films.
James Cameron had us nuked by robots. George Miller had us nuked by each other. George Romero attacked us with zombies. Roland Emmerich has lasered us, frozen us and, most recently, drowned us. Whatever the method employed to downsize humanity, apocalypse cinema is typically a spectacular exercise in cause and effect; in Emmerich's case, lavishing too much energy on an expensive God's-eye view of the former while barely bothering with the latter. You may not be shocked to find that John Hillcoat's entry to the subgenre, a faithful adaptation of Cormac McCarthy's devastating novel The Road, is the polar opposite of Emmerich's.

The cause is an irrelevance, visualised only in terms of its effect. A short scene has the unnamed protagonist (Viggo Mortensen) woken in the night by distant screams. He looks out of his window to see a flickering glow, then runs to fill his bath. "Why are you having a bath at this time?" queries his wife (Charlize Theron), blearily. "I'm not," he replies. Being a man of impressive practicality and instinctive resourcefulness -- the kind that populates the frontier of Western myth and invariably flounders in McCarthy's rich fictions -- he instantly recognises that reserves of water will prove crucial.

The world's end is not, in Hillcoat's hands, a nightmare intended to thrill. Not surprising, given his last unconventional Western was the brutal, fly-choked The Proposition. His apocalypse is one of brittle trees losing their death-grip on the ashen soil. It's one of sudden brush-fires, smoke-choked skies and pitiless storms. Forget the brain-eating undead, now so tediously ubiquitous. In Hillcoat's hands, nothing is as terrifying as the sallow, wild-eyed gangs who, to preserve their own survival, will hack down women and children without a second's thought, or keep people alive, naked and shivering, in a pitch-dark basement -- or rather, larder. It's as if the Texas Chain Saw Massacre family has taken over the planet.

Yet The Road has taken some flack since its festival premiere, predictably given the book's many passionate advocates. It is fair to say that the novel's episodic nature has proven tough to translate. Mortensen and Kodi Smit-McPhee seem to be forever cowering in undergrowth from rawboned hillbillies, while the string of recognisable-face cameos only accentuates how stretched the Man-and-Boy two-hander scenes can feel.

That doesn't mean, though, that either of the lead performances is in any way weak. The one-time Aragorn, here looking more street-bum than Strider, has invested all his physical and emotional energy in making The Man convince and compel as a parent struggling to raise his child properly under unthinkably extreme circumstances.

Smit-McPhee, meanwhile, shivers with a vulnerability that similarly rings true. In a world so leeched of compassion, The Boy's gentle innocence and desire to be a "good guy" lend him a sense of otherworldliness, honouring The Boy on McCarthy's page. However stretched, these tender moments between father and son ache with emotion, and resonate as strongly as any of Hillcoat's de-saturated visions of despair and terror.

One of the most chillingly effective visions of the world's end ever put on screen -- and a heart-rending study of parenthood, to boot.