By Ruben Romero - translated by Ollie, Rio and Zooey

Source: On Madrid - El Pais
The Road is the Apocalypse, according to Cormac McCarthy. Viggo Mortensen returns to the screen with an adaptation of a Pulitzer...and a few less kilos. 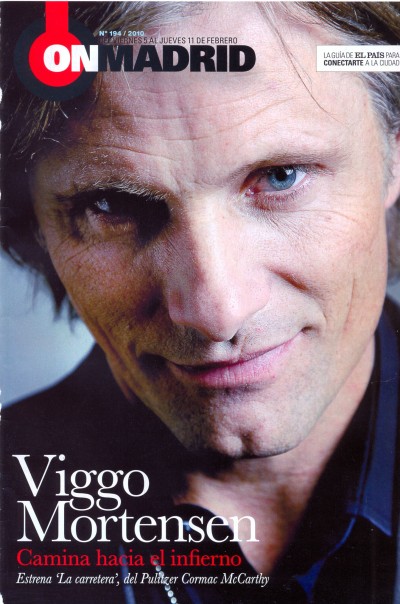 © El Pais.
On San Mateo street, near Alonzo Martínez, there is a beer bar. Nothing special. Three television screens and two liter mugs of beer define their clientele: older gentlemen who go there to watch soccer and young ones who play at quinitos and other playful alcoholic activities. But if the customer looks carefully, he will see, in a corner, a picture. In it, an emblem of a soccer team, porteño San Lorenzo de Almagro on the side, an autographed poster of its most distinguished "fan" in his most famous film - Viggo Mortensen, as Aragorn, in The Lord of the Rings. "Yes, I come there often. They are very good people. I like this central part of the city, because it's still a barrio and you can live the life of the barrio...Go in stores, shop..., " he says on the other end of the phone. He's talking to us in order to promote The Road, an existentialist journey of a father and a son through a country devastated by a catastrophe. Viggo is in New York with his mother, who is sick. It's not appropriate, therefore, to probe into his emotional life or his supposed relationship with the actress, Ariadna Gil.

Cormac McCarthy´s novel, The Road, on which the film is based, won the Pulitzer Prize. Is the film a faithful adaptation?

I think so, although on the surface the tale (an expression that, strangely enough, Viggo uses repeatedly) was harder. It didn´t have any trick at the end. It´s a terrifying story about two people to whom nothing worse can happen, but it ends up happening. Ultimately, this tale speaks to how much we have to hold on to our values, to what extent we are able to be kind-hearted while adversity keeps hitting us, while our options are taken away. Whatever happens, the most important thing is to continue being human.

It´s a very cathartic thought. Do you think the audience gets it?

In the Q & A with the audience, there have been people who have told me they have cried, that although they were moved, nevertheless, they were happy with it. It´s a sad tale, but it leaves you with a trace of strange joy. It makes you come out of the cinema appreciating life much more than when you went in. It´s like therapy.

In Hollywood they say that, because of the crisis, people just want escapist movies.

I know, and I have suffered it. In the States, even though things are not as bad as when we were shooting, they have promoted it, out of fear, as if it were a terror movie and it hasn´t worked. But in spite of that, in countries like France or The United Kingdom where it's been explained as what it is, where they have not lied in the promotion, it has done well at the box office. Maybe what´s happening these days is that there´s also a place for this kind of film, because maybe the moment has arrived to consider more important things, less material ones.

The movie talks about personal demons... What is your worst nightmare?

I'm afraid of failing as an actor. You always need to maintain a little fear as an actor, but it's the best way to learn, to make something new and interesting.

They say you lost 14 kilos to play your character. Any advice on dieting?

Skip the tortilla. [laughter]. It's not about being skinnier. It's not just the physical part. My job is to enter into an emotional state. When I prepare a role, I do it conscientiously and, believe me, I never have enough time. It's little things: reading poetry, thinking things over, preparing a certain accent, like in this case, although maybe that would be something too subtle for non-English speakers... A ton of details that maybe aren't necessary for the audience and that I throw out the window once I've finished filming, because if I didn't, I wouldn't be able to live.

Well, on this occasion you got so involved that you even spoke with the almighty Coca-Cola...

The Coca-Cola is in the book. I amused myself with the idea that it was a Diet Coke. (laughter). It would have been funny. But they only place their products in family movies. So I called them and told them everything: It's going to look great! Cheaper! Free! If it were Pepsi, it wouldn't be like the book. We filmed it with Pepsi, with Fanta...Things went better with Coke. [laughter]. We sent the scene to them and it made an impression. And they agreed.

You had a very special chemistry with your colleague on the film, the boy Kodi Smit-McPhee...

He is a gift from the gods. He's fantastic. Imagine an Australian boy who has never seen snow filming in the middle of a snowstorm. He told me, "I don't like the snow or that it's so cold, but it's better, because that way I don't have to act." Such a young boy (he's going to be 14), so sensitive and intelligent.

Yes, at the end of the shoot, those of us that spoke Spanish, we taught him a few words...When it was time to eat, he shouted, " I want a choripan!" (laughter) A very strong bond was created, a comradeship because of everything we lived through. It's real and I think it shows. That can't be faked.

Since you hinted that you were leaving the profession, your fans are afraid that every one of your films will be the last. Are you bored with the job?

Not bored, never. I would never say that. You can be sad, desperate, almost dead, unhappy...but how can a person be bored? I don't understand that. When they say, "Well, it's a somewhat boring film," I think, "Go to hell! You didn't like it, but there must be something. Something, don't be so lazy. Think a little." What happens is that you get tired and you have to recharge your batteries. That's all it is. I haven't made that many films in the last years.

By education and by vocation you have been a great traveler. What's your favorite road to get lost on?

I like to go to new places and, above all, in spaces in the middle of nature, whether it's sea or mountains. It soothes me. Even if it rains, even in bad weather, even if I'm on top of the most uncomfortable rock in the world. I feel happy in that setting.

And in a city like Madrid, do you find it to your liking?

Sure, quite a lot. But, even so, I can't help feeling like I do in other cities. You spend a lot of time on trivialities: at the Post Office, in line at the bank...life is short!

You were ready to do the premiere of Purgatorio, by Ariel Dorfman, in the Teatro Español. Will you return to carry it out?

Unfortunately, it's had to be postponed twice. I hope that in the end, we'll be able to do it. Because I want to work in that theater, not just because of the play, but because of the people. I've become well acquainted with the people who work there and the magic that emanates from the building. I've never in my life left a production halfway through, and I hope that won't be the case for this one.
Top of this page
Last edited: 12 February 2010 11:05:30
© El Pais.