Viggo Mortensen: "In some scenes, I felt like I could die."

By - translated by Zooey and Ollie

Source: Las Provincias
In the world of North American literature and modern cinema, the name of Cormac McCarthy is synonymous with quality. This brilliant author has penned novels that translate into Oscar-winning films like No Country for Old Men and premiering this week in Spain, The Road. The film, directed by John Hillcoat and starring Viggo Mortensen, Charlize Theron and Robert Duvall, centers on the dangerous journey to the coast of a father (Mortensen) and his twelve year old son. The Road takes place in an apocalyptic world filled with threats for its lead characters. 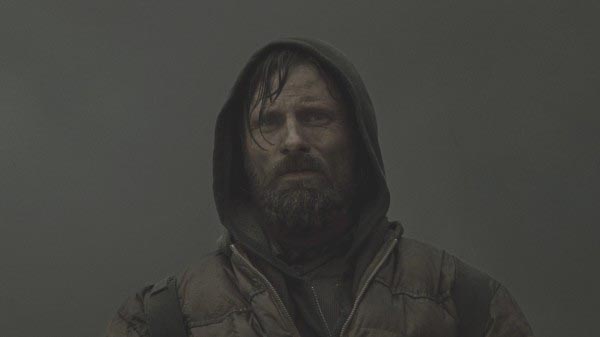 Image Macall Polay.
© 2929/Dimension Films.
What attracted you to this film?

It's a love story as well as an endurance contest. Father and son dare to set out on a very difficult journey and it is the father who learns more from the son and not the reverse. I like that lesson because it's not important how badly things are going if, in the end, something good happens. The story that the film presents is noble, simple and very clear. I believe that one has to see the film to understand it and that each person will come to his own conclusion.

Your character tries to teach his son how he should act as a person. Have you been in that situation?

In simple things. Children tend to be shy and many times don't ask questions. As for my son, I have tried to instill in him that he should be frank and direct, to look in the eyes of the person he's speaking to even when he's giving his order for a pizza in the restaurant. Once you learn to be a good person, you want your father to be one too and if your father betrays you, you get angry and it is that transition that is very well represented in this film.

This film seems strenuous. Did you end up tired?

Yes. To be honest, that was the most difficult thing, the physical part. I want to say that I have participated in films that have been filmed in locations with extreme temperatures of cold and heat, but nothing like this film, where the environment is a consistent character. In some scenes, I felt like I could die, but that helped me create the character.

What was it that bothered you the most?

The intensity. From the trees to the waterfalls. The weather turned into a character because as the director said so well, we had no need for special effects. What the audience sees is what we saw.

What's the purpose of almost losing your life for a film?

It shouldn't be exaggerated. It was an exhausting physical exercise and we made it that way because we wanted to be true to the book on which the film is based.

Is it true that you are thinking of retiring?

No, not all. I don't know where the press gets those ideas. I have no plans to retire because I like acting and telling stories. It is true that I have other interests like my family, my photography exhibitions and my publishing company.

How do you deal with your status as a Hollywood star?

It's strange. For 22 years, I was making films that didn't pay me enough to live on and I couldn't make it to the end of the month, but I enjoyed the acting as much as I do now.

Do you mean that fame has its inconveniences?

On the one hand, it's an honor, because people really admire your work and appreciate what you do, but obviously it's an invasion of your privacy. If I sit down with you having a beer and someone comes up and says to me "Excuse me for bothering you, but" - and they bother you, that seems at the very least strange to me. Does that make sense? Your first reaction as a human being would be to get annoyed, but then you adapt to a new situation and you deal with it diplomatically. Let's say, you get used to it. I'm not going to hit anyone who comes to ask me for an autograph.

What is it that annoys you?

Injustice annoys me, when it's done to me or done to others. It's something that makes me mad, whether as an individual or part of society.

I don't tolerate lack of honesty either, or truths that are used for manipulation. Selfish people or those who don't care about the environment annoy me.

Politicians annoy me with great frequency.

Your son is an adult. As a father, has your relationship changed with him?

I get along really well with my son. He doesn't get irritated about anything and is very reasonable. Sometimes I ask myself how he can be so calm, so sure of himself. My son is a great guy that I feel very proud of.

You are not very conventional, the kind of artist who is known to be different, even walking barefoot through the city. It seems that it's not important to you what people think of you?

Today I am wearing shoes and I've gotten dressed for the interview.

Yes, I worry about what other people say, but it's true that I keep a lot to myself. I walk without shoes because it's more comfortable. People, sometimes, indulge their passions and take them to extremes.

While others exploit their movie star image making one film after another, making the most of the moment, you are thinking of taking time off.

I suppose I have a different point of view about my career. I am not very conventional in that sense. If I wanted to make the most of the moment, I would have made six films in the last two years, but I didn't want to take advantage of that situation. If it's about attention, I've already had more than enough of that. If it's about money to live on, I've done enough that I can even give so that my family and friends live well. I am more than happy with what I have.

To be with my family more. I want to give myself time to get excited about something. I know that I have the ability to do several things at the same time but it's difficult to work and be at peace at the same time.

You are one of the sexiest men in the world. Do you like your reputation as a "playboy"?

If it mattered to me, maybe I wouldn't feel comfortable with the idea. There is not much to say with regard to that because I don't think about it. That people are interested in me for any reason seems fine to me, as long as I don't have to call the police.

Do you receive a lot of letters from your admirers?

There are people who are very diligent. They write to me a couple of times a year and have become part of my life. It's always flattering to hear what people think of you. For me, those letters connect me with the public and are a reason to continue working.

You are a photographer. Are you still exhibiting?

Yes. This year I exhibited first in Denmark and then in Iceland. [sic] I've also published a book of Spanish poetry with my company, Perceval Press.

What effect has Hollywood had on your life?

[Laughter] I don't know. But without doubt it is a place where even the smallest person can make a difference. What you do and what you say has a domino effect on your life and that of your family and friends. When you choose a character, you're never sure you are making the right decision but once you say yes, you succumb to the story, the characters, I never think of the negative things. I believe that the strength of this film is in the strength that all the characters express, something that's far removed from Hollywood.
Top of this page
Last edited: 8 February 2010 11:24:52
© Las Provincias.