Viggo Mortensen On 'The Road' 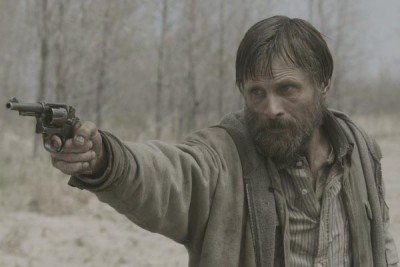 Image Macall Polay.
© 2929/Dimension Films.
I'm sorry to have to break this to you, but Viggo Mortensen is not a movie star. A poet? Yes. Photographer? Yep. Guitarist? Sure. Author? Uh-huh. Painter? Yessir. Actor? Most definitely. But celebrity? No way.

We meet in London to discuss his soulful turn in John Hillcoat's lyrical adaptation of Cormac McCarthy's spare chronicle of life after the apocalypse, The Road. In it, he plays a character known as The Man who, along with his young son, is trying to negotiate the trecherous climes of an America that has been all but wiped out at the hands of an undisclosed disaster. He tells me that while he's conscious of his celebrity, he's not insecure about it. "To me, celebrity doesn't mean anything. It means that you're well known, at least for a period of time. I worked for many years without being a 'celebrity' or a known actor, and the success of some of the movies I've been in has helped me to... move up the ladder."

Since attaining poster-boy status among the Forbidden Planet set for his starmaking turn as swashbuckling heartthrob Aragorn in The Lord of the Rings trilogy, Mortensen has been quick to exploit the legacy of his spell in the limelight and chose to embark on a journey into the dark heart of the acting craft. Though he's been plying his trade as an 'it's-that-guy!' character actor since the late '80s, it was the pair of films he starred in for David Cronenberg - A History of Violence (2005) and Eastern Promises (2007) - that catapulted him into the Method-acting major league alongside De Niro, Pacino and Day-Lewis.

And in line with the strongest work of those revered luminaries, Mortensen believes that cinema shouldn't be a case of heroes and villains. "I don't think there's a person in literature or in real life who isn't complicated. For me, people are endlessly fascinating and, as an actor, you have a choice: you can learn the lines, work out the gestures and the ways of speaking and stick to them, or you can do all that ground work and then just see where the other actors and the director take you on the day."

Mortensen's legendary seriousness can be a mite intimidating, but it's a feeling that softens when you consider how his borderline-compulsive attitude to 'deep research' has paid off. When Eastern Promises came out, there were tales of how he ventured alone into the Russian hinterlands to perfect the lifestyle tics (and tattoos) of the local gangster fraternity. For The Road, similar stories have emerged about how, in order to get the feel of surviving in a charred wilderness, he would wrap himself in a tarp and sleep outdoors. "It's something I've always done," he assures. "There were times on the set of Lord of the Rings when people would call me Aragorn rather than Viggo and I was starting not to notice."

Immersing yourself in the body and mind of another is all very well, but has it ever affected his mind? "As far as not being able to shed the skin of a character, no. Sure, you take them home with you and it drives people crazy, you become despondent if you're playing a despondent character, and so forth. But I never worry about it. I figure there's no avoiding losing your memory, or part of it, so I'm not in a hurry to forget interesting experiences or feelings that were awakened by doing a certain job. But at the same time, I'm fully aware that sometimes there is a price."

One aspect of his performance in The Road that stands out is just how convincingly he cries. It feels genuine, as if he's going a step further than just holding up some shallots to his eyes and trying to picture the family dog being taken around the back of the barn and shot. "A lot of it was down to Kodi Smit-McPhee," he admits, namechecking the young Australian actor who co-stars as his eternally optimistic young son. "The relationship I have with the boy is so intense that I didn't need to visualise anything other than what was in the film itself: it was sad and real enough for me."

The Road is the quintessential alterno-weepie. Are there any other examples of on-screen blubbing that have influenced his own technique? "Well, I watched Carl Dreyer's The Passion of Joan of Arc before shooting this, just to remember how uncomfortable, how real Maria Falconetti's performance is. When you think about it being 1928 and the way that most actors in silent movies performed, it was revolutionary. On an emotional level, it's as good as anything, say, Meryl Streep has ever achieved. It's a mind-blowing movie."

The cinematic palette from which his performance in The Road was painted doesn't end there. The late Russian spiritualist Andrei Tarkovsky was another influence: "The characterisation of the boy has echoes of Ivan's Childhood and some of the visuals and some of the unspoken discomfort that you get from watching something like Stalker are in there too. As a viewer, I gravitate towards those kind of movies."

There's no doubt that Mortensen is something of a connoisseur when it comes to world cinema. But he also has his fingers in a number of other artistic pies. From his time on the set of spirited period action caper Hidalgo (2004), he released an anthology of photographs named The Horse Is Good that were all taken from the perspective of his trusty steed. Did he take any photographs on the set of The Road? "Not really, but I wrote quite a bit. I ended up writing a lot of poems in Spanish and I also composed a bunch of music on the piano for a CD called Songs of Winter, which I'm just finishing up now."

You'd be hard pressed to name any other film actors who relish the same perks of the trade as Mortensen: "It's great if someone who never would've gone to a poetry reading goes to one because they're thinking, 'Oh, that actor guy's doing it - it'll probably be shit, but we should go and see it anyway!'" In short, he's not in it for the money. He's in it for the poetry.