Source: Film Review Online
Based faithfully on Cormac McCarthy's Pulitzer Prize-winning novel, The Road spotlights a post-apocalyptic world where horrific destruction is paired with moments of hope and faith as a father and his son make their way west across America to the ocean in the hope of finding safety and a warmer climate.

Throughout their perilous journey they are stalked by hungry survivors, ready to steal their meager belongings and take their lives.

I spoke with Mortensen about this grueling project which is so important to him. 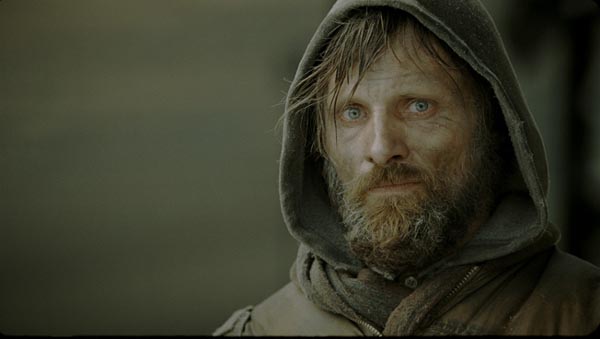 Image Javier Aquirresarobe.
© Dimension Films/2929 Productions.
How did you mentally prepare for this kind of role?

I tried to do things that I thought would be helpful, like listening to certain kinds of music, watching certain kinds of movies and keeping in mind what I thought they were headed for, visually. I read certain things and leaned on certain things that might be helpful or get me in a certain state, where I could go to those places that the character demanded emotionally.

Really, it's about being naked emotionally and just being honest about it, in subtle ways and in ways that were more obvious. It had to be very real and organic, which was the most daunting thing. It wasn't so much the physical journey, but what I would have to expose. I was like, 'I'm going to need some help, especially from the boy. I hope they find a great boy.

They did, Kodi Smit-McPhee is wonderful in this.

Kodi was the last boy I read with. There was something about him. He understood the story in a way that the other kids didn't. He's a joyful, well-adjusted kid, but there was something in his eyes when he was playing the scenes, even in the audition, that was sad and knowing. I thought, 'Wow, this could work.'

I read that you watched homeless people while doing research for this role.

I'm always aware of them. I travel a lot. I did actually speak to them, just to ask them how they got that way and how they felt about it. Not all of them wanted to talk, which was fine. Very rarely, but some were living that way by choice.

Usually, it was because they had lost their job and for some it was drugs, but for most people it was just financial hardship. There was nothing else they could do.

I asked how they felt about it, how they kept alive, what things they were worried about. It's like us [in the movie]. They have to figure out where they're going to sleep, where somebody can't do them harm and steal their stuff.

What was it like to work with Kodi? Were you very protective of him, during this process? Some of the scenes are quite harrowing.

They were hard scenes, emotionally. As much as he didn't like it and I didn't like it, the fact that it was so cold, and we were wet and tired all the time, it actually helped. The cold was particularly hard for him because he's from Southern Australia, not that you would know it from listening to him in the movie, and he'd never seen snow. The first day, it was snowing and he couldn't believe how cold it was. It wore him out very quickly, and it pushed his emotions and mine closer to the surface.

That made me more protective of him, in a way. I was trying to get him through the day, and then the next day. It was like the story, in a way. Let's say it had been not a relatively low-budget movie, and it had been shot with green screen and a lot of post, it just wouldn't have been the same. Yes, he's a really good actor, and together we would have made it seem like we were cold, it just wouldn't have been the same because it forced us to places, emotionally. It actually helped me, also.

There's a scene in the movie where you jump naked into the ocean - how was that to shoot?

It was very cold. I asked for another take, but they were terrified. They didn't want me to. They had ambulances. The water was 41 degrees Fahrenheit, and the wind was really blowing. The air temperature was the same, but because there was howling wind, I was practically frozen. I think the air was probably freezing. It was so extreme.

They had an ambulance and they had all these heaters on, and I just sat in there with a bathrobe and said, 'Just tell me when you're rolling. I'm just going to run out and go.'

So there wasn't a lot of acting for you in this film?

No, it was a chamber of horrors. But, I was on the journey together with Kodi.

Some of the scenes are very hard to watch.

A concern that I had, initially, was, 'How does it keep from being flat? Enough with the suffering already.' But, you trust the story and there are so many things that are learned along the way, in the interactions with other people, the environment and each other. You just have to trust what Cormac McCarthy wrote. Because the script was a very faithful adaptation, you just had to trust that book and that story.

There are inherently dramatic situations and emotions. When the overall predicament is stripped away, what do you do? How do you behave? How do you treat others? Do you even care anymore about being alive? Do you know why you want to stay alive?

Do you find out a reason to stay alive by the end? I think, yes, you do. And, that was interesting.