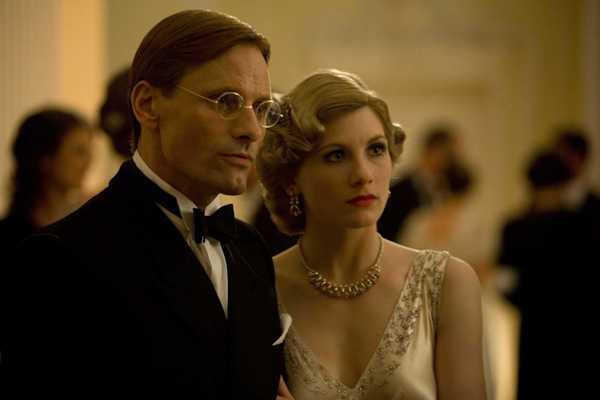 Image Larry Horricks.
© Good Films.
If only all interviewees were as pleasant as Viggo Mortensen. On entering the room at The Langham hotel in Melbourne, the Lord of the Rings star is quick to offer fruit, chocolate and drinks before the first question is even fired.

He spreads out on the two-seater sofa in an old pair of jeans and an oversized T-shirt emblazoned with the logo of his beloved football club San Lorenzo in the Argentina Primera Division.

He reaches into an ashtray and pulls out a half-smoked, rolled cigarette and re-lights it. Now he is ready.

But belying Mortensen's dishevelled appearance is an intelligent, humble, softly spoken and totally unaffected artist, whose passion for his craft spills over when he speaks.

After more than 15 years as a character actor, it was Mortensen's role as Aragorn in the Lord of the Rings trilogy that brought him to prominence.

Subsequent roles in critical successes A History Of Violence and Eastern Promises - both helmed by acclaimed Jewish director David Cronenberg - cemented his reputation as a leading actor, the latter garnering him an Oscar nomination last year.

The 50-year-old actor is in Melbourne to promote his latest film Good, which charts the rise of National Socialism in Germany in the lead-up to World War II and the strain it puts on the relationship between a German academic (Mortensen) and his best friend who is Jewish.

Mortensen says he felt his involvement in Good was fated, after seeing the stage play when he was beginning his career as an actor more than 25 years ago.

"I saw the play 25 years before we made the movie, so I had that sort of connection," Mortensen says.

"Apart from it being a good story, which is why you want to take part if you're offered the role, it felt fortuitous, I thought 'well it's destined, I need to do this, to close the circle'".

Mortensen, whose father lived in Denmark during the Nazi occupation, says that Good flouts the conventions of typical Holocaust movies and as such shouldn't "get lost in the shuffle".

"I thought it was something new, something different. The Reader, Schindler's List - decent movies, but they have some sort of catharsis, which in a way lets the audience off the hook and keeps Germany and Germans being different than us.

"In our movie, there's no escaping the fact that we're not so different, these things keep on happening and one must be vigilant. Even the convention of the principle Jewish character played by [Jewish actor] Jason Isaacs is not the quote, unquote 'good Jew'.

"He's certainly not religiously observant, he's not particularly reverent in any way. He likes to talk about women and have a drink, you even see him in his office eating a ham sandwich."

But the main point of difference Mortensen is alluding to is the film's contention that the Holocaust was not a conspiracy perpetrated exclusively by mad men, but rather that "good people" were also complicit after getting caught up in the chaos of the time.

His character in the film, John Halder, is an academic, whose views on euthanasia are co-opted by the Nazi's top brass.

An essentially decent man, Halder is beguiled by the power and authority of the Nazi Party and the status it affords him, reluctantly becoming a key figure in it after initially resisting.

The film asks the audience to sympathise with Halder, despite his abandonment of Maurice (Isaacs) when the going gets tough, but Mortensen is adamant Good is no apologia for Nazi Germany.

"If he's like me, should I resent that he's like me and say 'you guys are excusing Nazis', or should I say 'that's interesting because it doesn't allow me to compartmentalise and say 'well they did that ... they are like that ... back then ... couldn't happen here'.

"If you want to prevent it happening here, then look at this person as being you and that was my goal and I think we succeeded in making him a human being. But I can understand why people would be uncomfortable with it."

Good is just one of a slew of Holocaust-themed films to come out in the past 18 months and Mortensen says the sharp spike in the number is due partly to the state of the world, as well as the information age.

He says people have access to more information than ever before, and that parallels between the atrocities of the Nazis and the genocides of recent years have contributed to a resurgence in the genre.

"I think these movies are made because people see [the Holocaust] as not being an isolated incident. Until the early 20th century, it was more the province of select academics and historians who studied things like genocide and realised it wasn't a local one-time thing.

"Racism, xenophobia, manipulation of the masses, is not new. It wasn't new then [late 1930s in Germany] and it keeps happening. Look at Yugoslavia, Chile, Argentina, the massacres committed by the church before World War I, Africa."

Since wrapping shooting on Good, Mortensen has been busy starring in feature films Appaloosa and The Road, a highly anticipated film based on a novel by Cormac McCarthy (No Country for Old Men).

After the success of History of Violence (2005) and Eastern Promises (2007), Mortensen says he is keen to work with Cronenberg again, and while he wouldn't discuss details, he admitted the pair are already working on a project.

"It's a bizarre story, kind of going back to the wierdness [of Cronenberg's early horror films]. He's one of the few directors that if he said 'I want you to do this', I would be much less reticent to try almost anything, because he' proven to me that he's intelligent, he has a good sense of humour, that he's organised and a great artist."