The Happy Trails Of Viggo Mortensen

Source: The Guardian
Xan Brooks follows the star of Good on a merry road trip of an interview that takes in playing a Nazi pawn, surviving the Lord of the Rings and why he's about to disappear on us 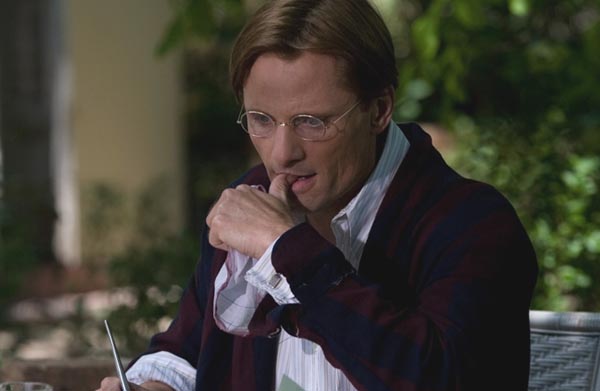 Image Larry Horricks.
© Good Films.
Viggo Mortensen talks so eloquently about the joys of getting lost that 10 minutes into the interview I'm lost as well. The actor likes cutting loose and roaming free: partly for research but also for his own enjoyment. Maybe he'll browse around some out-of-the-way bookshop, or drop in at some museum, or visit some old-time record shop and listen to the music from times gone by. Try as I might I can't drag him back on track.

"What music does your dad listen to?" he asks.

Er, that's probably too late for him, I say, with a nervous eye on the clock. Now, about your new film ....

He can be an exasperating, mercurial figure at times. Ostensibly, Mortensen is in town to promote his role as a conflicted, compromised German professor in Good, a small-scale drama that - in his words - "needs all the support it can get". He could have got away with delivering the sales spiel. Instead, he's content to go lolloping off after his own train of thought and in the end, the best option is to give up and drift along for the ride. In Mortensen's view, the journey is always more entertaining than the destination anyway.

Certainly he has arrived at the summit via a curiously circuitous route. Mortensen was born in New York to an American mother and a Danish father. He was raised in Argentina, then New York again, then upped sticks for Copenhagen. He worked in factories and as a truck driver before making his screen debut as a clean-limbed Amish farmer in Witness. For years he plied his trade as a character actor, adding spice to the likes of Carlito's Way, A Perfect Murder and A Walk on the Moon. His belated breakthrough role - playing Aragorn in Peter Jackson's Lord of the Rings trilogy - might just as easily not have happened. The actor was called in after shooting was already under way to replace original choice Stuart Townsend and only took the part on his son's insistence.

True to form, Mortensen's role in Good is worlds away from Middle Earth. It also marks a change of pace from his turn as a small-town killing machine in A History of Violence, or the buff Russian gangster he played in Eastern Promises. Adapted from the stage play by CP Taylor, Good casts him as John Halder, a liberal German academic who becomes a pawn of the Nazis. Halder is well-intentioned but weak. His little compromises lead him, in baby steps, towards the abyss.

"The Holocaust movie is almost a genre in itself these days," Mortensen muses. "But this one doesn't let the audience off the hook by having some big heroic gesture or villainous flourish at the end. Halder doesn't save some people and go down in a hail of bullets. Nor does he become truly evil. So the film gets people thinking about the decisions they make in their own lives, the compromises that we all make every day - whether it's at work or in a relationship."

And with that he's off again. In preparing for Good, he rented a car and took off around Germany. "I listened to music, looked at paintings, trying to find my face in those pictures. Walking down streets that you wouldn't have walked down. And you never know where that's going to take you. You're lost. I didn't have people with me smoothing the way, because then I wouldn't have learned anything."

It's nice to think of Mortensen flitting incognito around Europe, but I must admit I'm sceptical. This is the sort of thing he may have got away with as a young actor. But he is now 50, and firmly established as a Hollywood leading man. Lord of the Rings made a movie star of Mortensen. He became the thinking person's pin-up; the action hero with the soul of a poet. Surely he now gets recognised wherever he goes.

"Yeah, I admit that I didn't think through the implications of all of that," he says. "I remember going to the world premiere and suddenly thinking, 'Shit.' All that mass hysteria. Seeing your face on the side of buses. But you can still walk out into that world - it just depends how you go about it. If you go out with a big bunch of people, in a big fancy car, then you're essentially still the face on the side of the bus and you're inviting attention. But I try to stay low-profile and keep moving. You just have to be more nimble. It's like if I'm in a pub in London, after about 15 minutes someone may recognise me because they have time to look at my face. But in most cases people wouldn't expect to see me in some small town in Germany or something. If someone's at Auschwitz they're not looking for movie stars." He pauses to consider this. "Hopefully," he says.

For all that, Mortensen is about to spring a disappearing act on us. For the past decade he has been working flat out and is now poised to take a year off. He has been finishing his promotional duties for Good, and recently wrapped work on The Road, an adaptation of the Cormac McCarthy novel. After that he has nothing on the cards.

"I don't know what I'm going to do," he says. "And I don't want to know." When pressed, he reckons that he will probably read a lot of books, and spend time with friends and family. Plus, he has a bunch of artistic sidelines that need his attention. For as long as he can remember Mortensen has written poetry, taken photographs and painted abstracts. He even runs a small publishing house - Perceval Press - that specialises in leftfield, experimental work that might otherwise struggle to find an audience.

"I have a house in the north-west, in Idaho," he tells me. "But for the past three or four years I've lived out of a suitcase. But I'm not complaining," he adds. "I like it."

The interview is wrapping up and Mortensen is nearly free. He can do what he likes now: rent a car, take the road less travelled, find his face in antique pictures. The world is his oyster. Instead he opts to follow me out to smoke a cigarette on the street outside his hotel. "Let me have your address," he says. "I want to send you some of the books that we publish."

Except that it is now four months later and the books have not arrived. Maybe he finished his fag and forgot all about them. Maybe the parcel was mislabeled and went missing in transit. The first option is more likely, but I prefer to believe the second. I rather like the idea of Mortensen's gift out there in the world, perhaps sitting in some dead letter office in Munich, or Beijing, or Istanbul; its cargo pored over by bemused officials - quite gloriously, hopelessly lost.