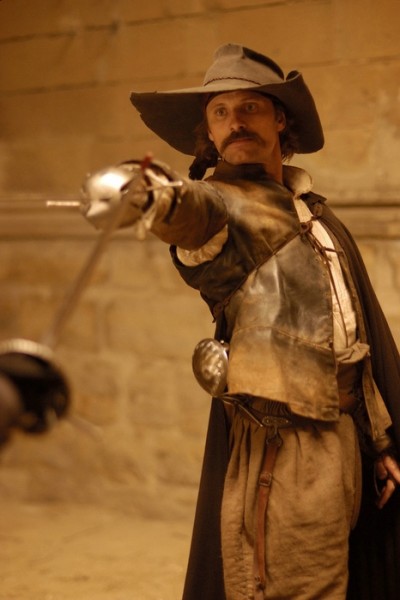 © Estudios Piccaso / Origen Producciones.
Getting to know him has been a gift from life. During the shooting of Alatriste, he behaved like a true gentleman; he not only made the movie, but he also did many more things. He is a 100% professional, a superb actor.

Thanks to Alatriste, we became very good friends. Viggo Mortensen is a Hollywood star that does not behave like one, during the shooting or outside of it. He is a role model in the international movie industry, and he deserves it because he has all the artistic and the human qualities.

When I first met him, the third part of The Lord of the Rings trilogy had just been released, and he had just finished his first movie with David Cronenberg, A History of Violence. He got really involved with Alatriste from the very beginning. When he took the role, he asked me: "Do you mind if I go to Spain a month and a half before the shooting?" And I told him: "Are you crazy? Come whenever you want". He wanted to get it right, to absorb it all. He did an amazing job with the accent, really serious work. And he also did a lot of sword training.

During the shooting, he cooperated all the time. In Alatriste, he appears in 97% of the movie, and he never gave in. He works at an incredible level, and you can't help but be surprised and touched by it. He enjoyed the company of Spanish actors a lot, and he constantly said "they are better than I am". He is very kind and gentle with people. When we went places, he dealt with fame in a very natural way. He spent a lot of time in Spain and people would recognize him all the time. He makes people feel comfortable around him, and you are not affected by the constant attention that he attracts because he minimizes it. Besides, everybody respects him because he has earned it.

After the shoot, he did an incredible promotion, and he never complained. We went to thousands of places, and he was always available. Abroad, he himself would look for new places where he could promote the movie. He wanted people to see it. I know he is very happy with Appaloosa too. I had already told him that I could picture him playing in a western, now I will be able to see him. I really want to see the movie; Ariadna Gil, who had already worked with him in Alatriste, is also in the movie.

I would definitely work with Viggo again. But I firmly believe that you need to help your friends, not make them suffer. Right now, he has the chance to work with the "cream of the crop" in the movie industry, and I don't want him to leave those chances aside to come and work with me, because I know he would try to do it. We will definitely work together again, as soon as he has more free time. I don't like to "use" my friends, and he lets you do that.