Viggo Mortensen Shows His Good Side 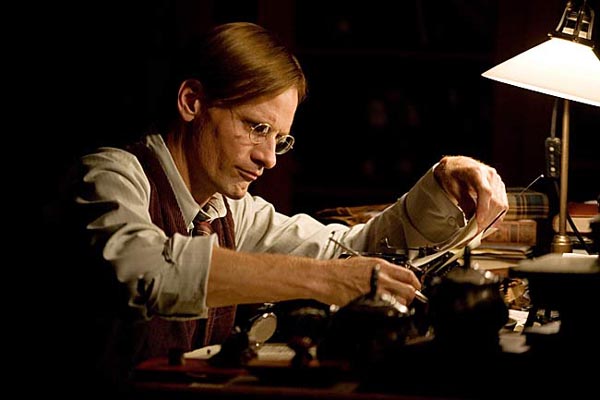 Image Larry Horricks.
© Good Films.
Is Viggo Mortensen the movie world's patron saint of lost causes? Once the actor has dedicated himself to a movie, he won't give up on it.

Take Alatriste, the Spanish-language epic he spent hours on the phone promoting in Australia a couple of years ago, even though it was showing only a few times at a film festival.

A film he followed to Japan on the off chance they might get it ''as a samurai story''.

A film he's now determined to get the rights to so he can release it on DVD in the US, where it never even got a big-screen look-in.

Now, one Oscar nomination and one 50th-birthday celebration later, Mortensen is back on the hustings whipping up support for another film that needs his help to be heard - Good.

It's the story of a hard-working German family man who agrees to write a seemingly harmless paper for the Nazis.

Bit by bit, this good man's values and beliefs are corroded until he looks in the mirror one day to find himself wearing an SS officer's uniform.

''Good is hard because it's a small movie. It's easy for it to get lost in the shuffle,'' Mortensen says, rolling his own cigarettes as he talks, wearing an awfully lairy soccer shirt and picking at a box of dark chocolates in his Melbourne hotel room.

''As far as movies that are World War II/Nazi/Holocaust-related, several came out this season, including, for example, The Reader.

''Our movie is much more subtle, and flies in the face of certain conventions that even a smart movie like The Reader adheres to - it has to have some catharsis at the end where you get some release as an audience. We don't in ours.

''And it's about extraordinary events - Good is really not about an extraordinary person or event, it's just this gradual wrong turn, where you just go further and further down the wrong road, you deny it, you don't want to look in the mirror, then, finally, you're faced with it. Then what?''

Mortensen loves that ''Now what?'' vibe in a film. But admits it doesn't make for an easy sell.

In such a case, Mortensen himself becomes the hook on which a film can hang its appeal - his heroic Aragorn from The Lord of the Rings legacy, a reputation for quality, and those amazing light-blue eyes seem to be enough to draw an audience to anything he puts his name to.

But it says something profound about the psychology of the man that these are the types of projects he chooses.

But just what it says, Mortensen isn't exactly sure.

He stops and starts again.

''I like stories that make you think. They nag at you afterwards - the next day you're like, 'Hmm, I don't know if I liked it. Or is it that I didn't like it or I didn't like the fact that I had identified with this character and suddenly I didn't want to at the end? And you know, when they showed that concentration camp, it just seemed so ordinary ... not wrong, not incorrect ...'.

''But of course, that's what's scary, when bad things happen gradually in an atmosphere of normalcy. That's what's truly terrifying.

''So it goes around in your head. Those are the kind of movies I like. A History of Violence is that way. Eastern Promises has that ending where you think, 'OK, now this guy's really in a jam. What's he do now?'

''And if you do care enough to wonder 'Now what?' at the end of a movie, then something's been done right as far as I'm concerned.''

''Now ..." he pauses and cracks a big smile as he switches into Hollywood mode, ''if you asked my agent or somebody about why I'm doing these sort of movies, or going off to do a play or something, they'd say 'Well, I dunno, I think he has a death wish or something'.

''Career suicide,'' he says with a laugh.

''I don't really know. I think life is short and while I have the chance to do good stories, I'm gonna do 'em.''

As of now, Mortensen's bookshelf of stories is nothing to be sneezed at.

Born in New York to a Danish father and American mother, Mortensen grew up in New York, Argentina and, after university, Denmark.

He's a man of many languages, and many skills - he runs his own publishing house, exhibits his photography from Copenhagen to Cuba, records music and voraciously ingests all the news, politics, literature and culture he can get his hands on.

His acting career began in the early 1980s in New York, bit parts (Witness), leading to more solid supporting roles (Carlito's Way, The Portrait of a Lady, A Perfect Murder).

Then came what Mortensen steadfastly refers to as a slice of ''luck''.

The Lord of the Rings trilogy catapulted him into take-your-pick territory.

He has so far used this power to pick the not-so-popular horse race across the desert epic Hidalgo, the acclaimed A History of Violence with David Cronenberg, the aforementioned Alatriste, Cronenberg's Russian mobster tale Eastern Promises, for which Mortensen was nominated for a Best Actor Oscar, the Ed Harris western Appaloosa, and now, Good.

''I do think I've been lucky,'' Mortensen says, surveying his resume.

''I'm aware of the fact that many good actors can't really make a steady living in the first place. And if they can, they'd be lucky to have one movie that will stand the test of time, or that somebody might watch 20 years from now.

''I've been really lucky, because I've been in more than one movie, by more than one really good director, that I think stand the test ... at least for a while.''

It can't just be luck. Mortensen is clearly very good at acting - and at looking very good - on screen.

But he won't be moved.

''A lot of it is luck, just with The Lord of the Rings becoming a smash success - nobody knew it would be that big. And that luck allowed me the opportunity to play roles like this.

''Before, even if Cronenberg said 'I want him to be in A History of Violence', they'd say 'Well, people don't really know that actor enough, we can't afford to cast him'.

''So that's luck. But the thing about luck, when it comes your way, you gotta do something with it. If you're playing soccer and the ball comes to you, you gotta know what to do with it when it gets there.

''Sometimes you make a mistake, and you don't make a goal or make a good pass, but at least I have been practising for a long time and I've been thinking about movies, and watching other people work and learning from them.''

Clearly, Mortensen isn't taking part in the same game most other Hollywood players seem to take the field for.

His next film, an adaptation of Cormac McCarthy's novel The Road (likely to be released in December), is already being talked about as Oscar material.

Mortensen says the shoot for the heavy, apocalyptic story was emotionally draining, but spends most time heaping praise on his 13-year-old Aussie co-star, Kodi Smit-McPhee.

Back to you, Viggo - will The Road send you back to Oscarville?

''Oh I don't care. It's a bit of a circus, it's very strange. But it's interesting, I mean, as a sociological phenomenon, that whole thing,'' he says with a wry smile.

''I didn't partake in the way the other nominees did. I didn't do the political campaign.

''And they say you can't win if you don't do that. That may or may not be true, but then what's the point? As far as I'm concerned. It doesn't matter.

''I'm not gonna be rude about it. I'll show up for the ceremony. But I didn't participate in the everyday ... I dunno what they do, cocktail parties, keeping in people's minds, trying to convince people to vote for them. It's like, 'ugh, I'd rather just let the work speak', you know.

''I'm not judging people who do the other things, but I wouldn't be comfortable.''

Nonetheless, Mortensen was part of it - he attended all the big awards ceremonies from London and Los Angeles, taking great interest in how the competition affected his peers.

''I remember after the Oscars when we were walking out - when you think about it, four-fifths of the room are losers, or can feel like they are.

''I didn't. I felt like it was a pretty interesting event and it was interesting how glum people were. It's like, it's great!''

Mortensen would seem to have watched his 50th birthday roll by last October with the same kind of interest-meets-intellectual detachment.

''Well, different from 23 in that my energy is different and I'm not quite as tireless, I suppose.

He laughs, and does a little mental knock on wood.