"They don't let me act like a clown in movies"

Source: Europa Press
Viggo Mortensen stars in Appaloosa, a classic western directed by Ed Harris, full of duels, horse chases, bandits and two friends that prove they are loyal to each other even when a woman comes between them. Also in the movie, Ed Harris, Jeremy Irons and Renee Zellwegger. 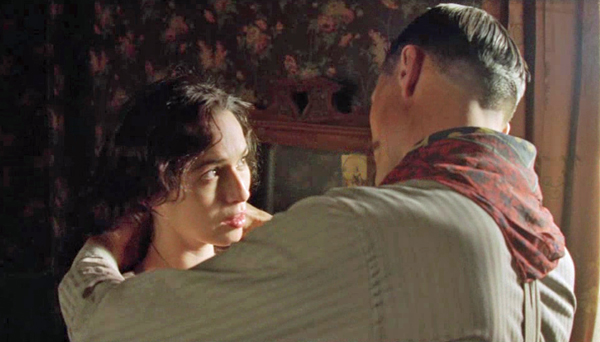 © New Line Cinema/Warner Brothers.
"Those who know me can tell you that I can be a bit of a clown, and in movies they don't let me do that," the actor commented; with him was Ariadna Gil, his "girl" in Appaloosa, which opens today in Spain.

The movie, based on Robert B. Parker's novel, takes place in New Mexico in 1882. Virgil Cole (Ed Harris) and Everett Hitch (Viggo Mortensen) are in charge of restoring order to the mining town of Appaloosa, which had been changed by the powerful and intelligent farmer Randall Bragg (Jeremy Irons). To make matters worse, the intriguing widow Allison French crosses their path, and she will not stop until she ends up with the most powerful man in town.

"Violence has terrible consequences," admitted Mortensen, who accepted this role because of the intelligent dialogue, the great cast, the sense of humor and the type of communication established between his character and Ed Harris'. "I like good movies; I wouldn't have accepted this role just to work in a western. If I am going sign up for a part in a movie, there has to be a good story, and this one is good," he pointed out.

Mortensen, with his Argentine accent, said that on Wednesday he went to see the movie I Just Want To Walk, directed by Díaz Yanes, starring Ariadna Gil. He said the actress was "awesome", and everybody laughed, so Ariadna Gil asked him to tone down the expression because in Spain it meant something else. So the actor responded: "Congratulations on your job, and you are awesome."

A small role for Ariadna Gil

Ariadna Gil, who plays the role of a Hispanic woman that captivates Viggo Mortensen's character, admitted that although her role was "very small", she was "terrified" about the responsibility of working for Ed Harris. She said that afterwards she relaxed and thought it was great to have the opportunity to work in a western in which the two male protagonists talk about real and trivial stuff like the fabric they will choose for their curtains.

Ariadna also pointed out that the women's roles are different in this western, in which guns compete with loyalty and love, and in which the ending is not the one most people expect.

"Sometimes, in life and in movies, things don't turn out the way you expect them, and that is not always bad," pointed out the actor, who has two more movies coming up soon: The Road, by Cormac McCarthy, which Mortensen hopes will open in Spring, and Good, in which he plays a professor that publishes a book about euthanasia during the times of the Nazi in Germany. Good will open in the US on December 31, according to what the actor told Europa Press.

In that sense, Viggo Mortensen admits that he has been lucky with the movies he has worked in lately and he said that he would love to work with Agustín Diaz Yanes and in Spain again, where "I feel at home."

The actor also admitted that he would love to be part of The Hobbit, based on Tolkien's book. "If they ask me to do it, I would love to," he said. "My character is not in the book, but if they make two movies, which is their plan, maybe they can put my character in the movie that links The Hobbit with Lord Of The Rings; if they do it, I'd rather play the character myself than have another actor do it."

Passionate about soccer - he is a San Lorenzo fan; he sported and gave away stickers to some journalists, - photography, poetry, literature and painting. Mortensen announced that he will soon publish Songs Of Winter in Spanish and that by defining his art as "abstract", "I can do whatever I want," he joked.

Mortensen also asked for patience with the new president of the U.S., Barack Obama, who faces a "pretty complicated challenge" thanks to "Bush and Cheney's lack of responsibility" and he said that even if he had two terms it would be difficult for Obama to "fix everything that was damaged."

"He will do a better job, but the expectations are high and the economic situation is a mess." He also said that Obama "is not a perfect man" and that he will have to accept several deals with his opponents. "But we have to be patient," he warned.

However, he highlighted the need for change in U.S. policies, especially foreign policy. "I hope that as from now, the U.S. will change its imperialist attitude," he concluded.
Top of this page
Last edited: 22 November 2008 13:20:03