Viggo Mortensen, The Photographer Of Dreams

By Giovanni Valerio - translated by Cindalea 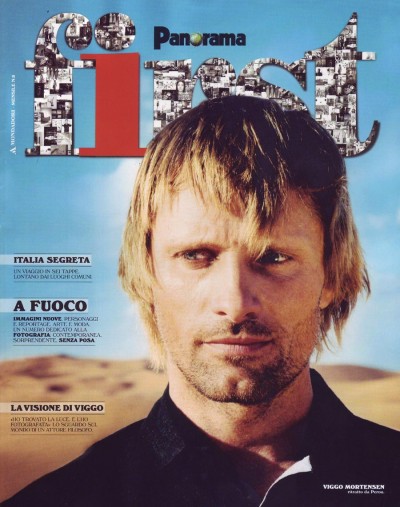 Panorama First magazine (Italy), July 08
Image Perou.
© Panorama.
The Americans say he is a "Reinassance man", because he is an actor, of course, but he is also a painter, a poet, a musician, a photographer.

Mortensen makes the most of the whole range of possibilities of expression, such as he passes from one language to another, from the Danish of his father to English, to Spanish, learned during his childhood in Argentina, to Italian.

"If I stayed in your country a couple of weeks, I could speak Italian a bit," he smiles.

An open mind, like the lens of the camera that he always brings with him.

His pictures have the names of the places he has visited while travelling around the world: Santa Monica, Krakov, Urals, Albuquerque, Toronto, the deserts of Alatriste, the horses of Hidalgo, the landscapes of Middle Earth in New Zealand.

On the set, he is always surrounded by people, but sometimes he prefers being alone.

He rents a car and loses himself, without any destination or navigator, alone, or sometimes with his son Henry (20 years old).

He stops, in silence, to catch a piece of sky, or an old man who feeds the pigeons on the shores of the Danube, or the sunlight which filters through the forest.

Staying always barefoot is a way to feel himself more connected to the ground.

He is barefoot, after he has taken off the black cow-boy boots, even in the Museum of Photography in Reykjavik, where we meet him and where, until August, 31, he shows his more recent pictures.

After that date, we'll meet him in the movie theatre, in the western Appaloosa with Ed Harris (out in the USA in September) and in the post-apocalyptic thriller The Road, based on the novel by Cormac McCarthy (in November).

Next year, to mark his versatility as an actor, he could play Edgar Allan Poe in a movie directed by Sylvester Stallone. [sic]

Now, though, with us he is only a photographer, and "Viggo's thought" comes out from the lens of an old Hasselblad or from a simple disposable camera.

The photographer Mortensen invites people to keep their eyes open to find out the details (and the poetry) of everyday life.

He quotes Proust ("The true journey is not to look for new landscapes, but to look at the world with new eyes") and Buddha ("Doubt everything, find your own light").

By means of the camera, Viggo has found his light on the path.

The light is the one he finds in the burning sunsets, in the blue of the sky, in the stylized black and white.

"Every moment of light or darkness is a miracle," he quotes Walt Whitman (the American poet and writer, who wrote the poetry collection Leaves of Grass).

As in the Dead Poets Society, he invites to seize the carpe diem with a click. "I take pictures to keep track of my experiences, of my meeting with the people".

Like the philosopher Thoreau, Viggo likes to lose himself in the woods, into the wild, in a trip into nature to find beauty and freedom, and to find the essence of life, as he explains with a deep, quiet voice, between long pauses and a cigarette rolled by himself.

To keep track, you say. But why should we take pictures, or keep, what we see around us?

"This world is a dream we all contribute to, in one way or another. We are part of the dream, if we are aware or not, if we like it or not. These pictures are a part of my dream, of the way I exist and act in the world.

When I show them, when I look at them or we speak about them, they include also another dream: the dream, the memory how the light was in that moment, how the place where they were taken was. They are 'memory' of a light, exactly how they say 'picture' in Iceland: lijosmynd, that is lijos (light) and mynd (memory).

To take pictures means to lock the memory of the light as it was in that exact moment.

What is the relationship between cinema and photography in your work?

"Making movies is only one of the things I do. I travel a lot and take pictures everywhere, even when I'm shooting a movie. As an actor, I'm very interested in the story, in what happens, in the details.

I have the same attitude while I'm walking on the road and looking at what's happening around me.

In a way, I am a photographer even when I don't take pictures. I think it's an instinctive thing by now, a part of myself.

In a conscious way, on a more technical level, on the set I pay a lot of attention to the way the shooting is made, to the way the director of photography places the lights: maybe being a photographer helps me to play my character better, because I am aware of my position in some shots.

I can say that the two things go on in parallel, and this is an advantage on the set: as a photographer, I understand quickly what they are trying to achieve and I can help to tell the story..."

Do you ever discuss about photography on the set, with the directors?

"Sure! I speak of art and photography, but also of football, of my team, the San Lorenzo de Almagro.

And then I speak of food, wine, bugs, clouds, shoes..." (He laughs, showing his feet, covered only by the socks.)

"I was used to printing my pictures in the traditional way, but now I use the more up-to-date and common medium, the digital one. But I have a great respect for the image: all my pictures are shot on film, then I scan the negative. Basically, you get the same result, but more quickly, and for me, when you publish books, it's very important. Today, the paper and the ink are so good that the picture keeps the black and the contrast very well. In conclusion, the quality is as good as the one from the traditional print, so why not?"

What are your reference models, if you have any?

I've taken pictures since I was a boy, and - I think it's quite normal (the same thing happened when I began to paint or to act) - then I was more aware of my models: artists that I respected and wanted to emulate.

But in the end, you do something which is your own.

If you have worked enough (in cinema as in photography), you feel good only if you find your own way.

After a lot of practice, to choose the subject and frame it beyond the lens comes almost as an unconscious move.

You have to practice if you want it to all seem easy, just like when you act: if on the screen it all seems simple it is because you worked hard.

When you see a movie and it seems easy, you think: I can do that.

It is the same with photography, or with some paintings. People think: I can do that."

On the contrary, not everybody can do it?

"To take a forceful picture, which really works (from a subjective point of view, of course) it is only the result of experience. It is like on the set, when I prepare myself for a role and work on that everyday: something comes from habit, everything else is something you learn, but it is always the result of the same thing: to practice, to pay attention, to work hard...".

"Nothing! It's like if you asked me what arm I prefer. People are inclined to think in terms of categories, and do the same with a person. They say: - I met that guy, he is..., he does...- It's easy to put a label on someone, while you have only a vague idea, of the contrary. But the true thing is that every people are different everyday, because the dreams change. Constantly."