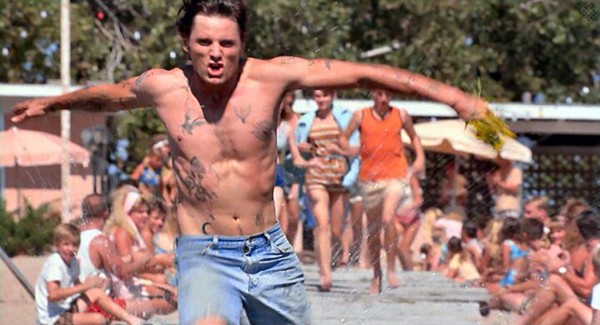 © Westmount.
Given his off-screen reputation as a boozing/brawling troublemaker (not to mention his ferocious, neo-De Niro performances in Bad Boys and the underrated At Close Range), it's no surprise that Sean Penn, in his debut as a writer-director, would gravitate toward the sort of brooding, psychodramatic study of macho explosiveness that came into vogue during the '70s. The surprise is that Penn shows real talent as a filmmaker.

The Indian Runner was inspired by the Bruce Springsteen song Highway Patrolman, but Penn seems to have borrowed even more from movies like Badlands and Taxi Driver (and from the life of Gary Gilmore) to tell this moody, fatalistic story of two brothers in late-'60s Nebraska. One, Joe (David Morse), is an honorable cop and family man, the other, Frankie (Viggo Mortensen), a psychopathically violent Vietnam vet whom Joe desperately tries to save.

Penn knows how to bring out the best in his actors. He gets fully felt performances from Morse, the volatile Mortensen, and Patricia Arquette as Frankie's spacey, childlike girlfriend. And though the movie is sometimes too mannered (during one unaccountable stretch, Penn suddenly turns into Diane Arbus and peppers the screen with small-town grotesques), it has an accomplished rhythmic flow, a sense of people's destinies unfolding step by step.

The real limitation of The Indian Runner is that its story is too self-consciously mythic (maybe that's the Springsteen influence after all). Penn is trying to get at gritty American ''truths'' about love, brutality, and blood ties. Somehow, though, it's all a bit pat: By now, even these stark themes have the ring of movie conventions. A character like the rakish, amoral Frankie, with his tattooed chest and his criminal sexiness, is too glamorous for comfort. Penn wants to reveal Frankie's inner anguish - but he's also revelling in danger and recklessness for its own cinematic sake. Next time, he'd do well to steer away from the easy catharsis of violence. He might just triumph.