Aragorn As A Warm Baddie

By Elaine Brand - translated by Hannah 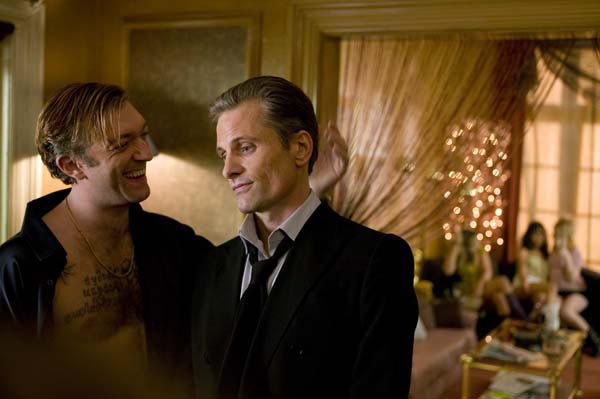 © Focus Features.
He is an actor, poet, photographer and painter but everyone knows him as Aragorn, the long haired hero in The Lord of the Rings. Viggo Mortensen himself doesn't pay much attention to how people remember him. "I find it difficult enough to deal with here and now."

The half Danish Viggo Mortensen (49) is no average actor. Even after the mega success of The Lord of the Rings trilogy in which he portrayed the role of Aragorn, he has been able to avoid the Hollywood craziness. His private life has hardly changed. He spends a lot of time on photography, paintings and poems. "I see it all as one: all my art reflects my ideas about this world".

"The role of Aragorn has given me a lot of new opportunities on the acting front. Because of this I have been contacted by director David Cronenberg. Not that he has seen the trilogy, by the way, because that isn't his cup of tea. He discovered me afterwards because I was so much in the spotlight."

Mortensen and Cronenberg have worked together before in the critically acclaimed A History of Violence (2005). It's not a coincidence that the director immediately thought of Mortensen for the role of Nikolai in his new film Eastern Promises about the Russian mafia in London. "I was thrilled to be allowed to work with him again. Cronenberg is so talented. Even though he has been doing this for more than forty years he is still open to other people's ideas and visions. He comes to the set very well prepared but he is always flexible enough to throw his plans overboard if someone else has a better idea. I think that's why he's such a genius, because he's open to new things."

Mortensen plays a quite violent man in Eastern Promises. At the same time he shows a sensitive side of the man. As viewer you get close to Nikolai in your heart, just like Tom Stall in A History of Violence. Mortensen: "I think that the sensitive side becomes visible mostly through the direction. Through all the details he puts into the script but also simply through acknowledging the sensitive side and showing it. Often these kinds of characters do stay one-dimensional, Cronenberg shows several layers"

Nikolai may have sensitive traits, he is also responsible for many violent scenes. Especially a naked fight scene in the sauna is very intense: "That's because the scene is so honest. It is very much in your face, but still you just can not look away. It was very intense playing it, we were constantly touching up the many tattoos that were smeared away through the fighting. Afterwards I was covered in blue bruises." Mortensen has had trouble with that before, being wounded while filming. The man is extremely fanatic in his roles and during filming The Lord of the Rings he broke two toes and a tooth.

Mortensen thinks that the public as well as the critics pay too much attention to the violence in Cronenberg's work. Mortensen: "It just depends on what you pay attention to. I think that David mostly shows that people often choose to do the right thing, like Anna (Naomi Watts), who decides to save a baby. Also Nikolai often makes honorable decisions within his criminal world. That's why the characters become interesting and sympathetic. At the end of the film it is difficult to let them go."

He himself has let Nikolai go long ago to crawl into the skin of his next character. At the moment he is wrapping the film Appaloosa in New Mexico. It's a Western that is mostly about the friendship between two men. "I especially thought the storyline was interesting," says Mortensen, who chooses his films because of clear reasons. "I also enjoyed working with Ed Harris again. We got along well with each other during A History of Violence." After this he was planning to take a long break but the next project was too interesting to let go. In The Road - a thriller based on the novel of the same name by Cormac McCarthy - he plays a father that has to save his son. "This is what happens when people have seen your films, the offers keep on coming."

In this coming period he will mostly be busy making films and he'll have little time for his other artistic endeavours. "That is fine. I love to travel physically and mentally. That's what makes acting so attractive; you crawl into the skin of your character and become someone else". As a child Mortensen has always travelled a lot and because of this, besides Danish, he also speaks other languages. For a film role he still likes to get on a plane to go and study the culture and language. "For the role of Nikolai I travelled through Russia by bus and train for two weeks, just to listen and to look around me." His thorough preparation works excellently, his Russian accent in Eastern Promises is very convincing.

Despite his star status it was possible to do that undisturbed, travelling by public transport through Russia. Only at the airport on the way back a boy pointed at him. "Aragorn!".
Top of this page
Last edited: 8 February 2008 14:11:10
© DePers.