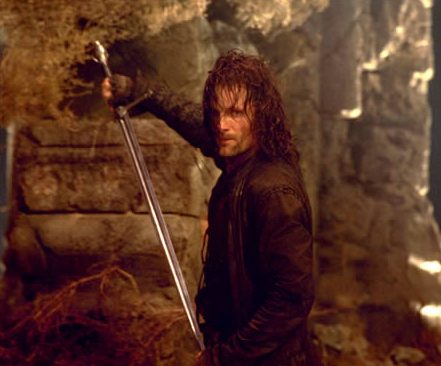 © New Line Productions Inc.
For the first hour, The Fellowship of the Ring is a flawless introduction to the world of Middle-earth, expertly outlining the backstory and evoking a tangible sense of danger as Frodo the hobbit (Wood) sets out on his quest to destroy the all-powerful one ring - sought-after weapon of the Dark Lord Sauron. With the wizard Gandalf (McKellen) as his guide - and a protective fellowship drawn from various Middle-earth races - Frodo must do battle with orcs and other beasties, as well as fend off danger from within, as the ring works its evil charm on him and those around him.

The film's problem comes in cramming so much story into even three hours, and from the moment Liv Tyler's elf princess pops up, the pacing seems slightly off - skipping from one breathless chase scene to the next. Also, while the scenes with the rank, fearsome orcs are superbly realised, Jackson finds representing the spirit of good much more difficult - soft-focus photography and bright light are his unsatisfactory ploys. This is all the more disappointing when compared to the other groundbreaking effects work on display.

The casting, however, could not have been better. Wood is perfect as Frodo, the vulnerable, slightly weedy central figure whose resolve will no doubt grow with the films, while Billy Boyd and Sean Astin nearly steal the picture as the accident prone comic relief. Nearly, but not quite. That is left to Viggo Mortensen as mysterious warrior Aragorn.

Brooding, intense, and handy with a blade, Mortensen is the film's greatest strength - Han Solo to Wood's Luke Skywalker. The Star Wars comparison is an apt one, for if the next installment, The Two Towers, can build on this hugely impressive franchise starter, George Lucas better look to his laurels.
Top of this page
Last edited: 18 December 2007 14:50:00