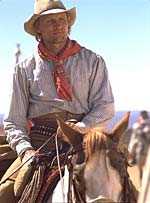 
In his first feature film since Lord of the Rings, Viggo Mortensen is an adventurous cowboy in Hidalgo, a yarn that doesn't get all the facts right. But that's just fine with this myth-loving leading man.

"I don't have any long range plans," says film star Viggo Mortensen, his voice as hushed and calm as Aragorn's. "I'm not signed up for any other movies. I haven't had time."

It's hard to believe that the man who played the hero of the title in The Lord of the Rings: The Return of the King would not be the headliner in a parade of upcoming films.

But Mortensen is not what Tolkien's Treebeard would call "hasty." He approaches his career the way he approaches others. He's a quiet, thoughtful man, approachable and easygoing, free of the arrogance and attitudes that sour so many celebrities. A couple of weeks after this interview took place, Mortensen and the rest of Peter Jackson's "fellowship" won Oscars for their third and final Tolkien adaptation. But it was clear at this particular meeting that Mortensen had already put Middle-Earth behind him. Now, he's focusing on his passions and enjoying the ride.

This interview, taking place in a sun-drenched room of Seattle's Fairmont Hotel, was just the latest stop on a whirlwind promotional tour for Mortensen's new film Hidalgo. And he makes it very clear that he wouldn't be doing this kind of thing if he were not happy with the movie. "I have a hard time trying to sell someone on something anyway... but at least it's a movie I like. Otherwise I'd have to be talking about something else: Seattle, the weather... I like Hidalgo. I think it works on a lot of levels."

The tour has taken its toll. "Literally, every day for the past few months ... it's almost been a different place every day, or for two days, or going to the airport. I never thought it would be possible, but I've been to more countries and more cities for Hidalgo than I ever visited for The Lord of the Rings. I didn't think that was possible. We've covered a lot of ground."

He must have been impressed with the project. Mortensen paid director Joe Johnston quite a compliment by carving out the time for Hidalgo in the middle of Lord of the Rings hysteria.

"It was a rousing sort of adventure story ... a classic heroic journey, not unlike Lord of the Rings but from a different point of view."

The story of Hidalgo, as told in John Fusco's script, mixes historical details with a heavy dose of myth and speculation. Mortensen spells out the familiar pattern: A hero's character is determined not by whether or not he is triumphant, but by the choices he makes during a dangerous journey or a strenuous race. "To complete the cycle in the classic hero journey, there is one more step: What does that person (or group of persons) do with what they've learned from the experience?"

Mortensen finds himself irresistibly drawn to the power of myth. "It's the same sort of story that has been told as long as there have been people, and that will be told as long as there are people: a challenge is presented to an individual, big or small, who is obligated in most cases to accept it. You have to take that step to say 'Yes,' and once you do, you're in for a pretty hard time of it in a lot of ways ... in big and small ways. It can be a test of your honor or your ability to keep your composure in difficult situations."

While the story has its roots in the details of a historical figure - Frank Hopkins - Mortensen acknowledges that a great deal of the narrative is fictional. But the film embraces these fictions, creating a sort of Indiana Jones in Arabia yarn.
The fictitious additions don't seem to bother Mortensen. "A lot of things that are expanded on or added to it are metaphor," he admits, "helpful in highlighting certain values and certain ideas. I think that's the purpose that myth serves."

And he's off and running on one of his favorite avenues of discussion - the influence of myth on culture and history. "Our identity as a nation is largely based on myth, on storytelling, making up stories, exaggerating the accomplishments of extraordinary individuals. You see it all the time, whether it's John Kennedy or George Washington or any number of men and women who throughout history have done something extraordinary or unusual."

Mortensen did have one concern before accepting the role: Would Hidalgo treat its' Middle Eastern characters respectfully? "It could have been done many different ways. You could have leaned towards making it more a jingoistic exercise - a crusading cowboy goes and kicks [butt] in the Middle East. If you'd perverted it another way, it could also have been a really heavy-handed message story." He believes that, in the end, Johnston portrayed the traditions of the foreigners respectably, even if some of the characters were clearly villainous.

The film's context has contributed to rumors that the film is in some way meant to reflect the recent U.S. endeavors in the Middle East. But Mortensen says, "I signed up for this and we shot it all before the invasion of Iraq. The last few days of shooting were just as that was happening. There were people who thought, 'Oh, they're capitalizing on that... send a cowboy over to the Middle East with a bunch of Arabs and Muslims.' Some people have said that. You're conditioned [by] Hollywood to seeing different cultures being portrayed too often in a condescending way or being insulted or perverted in some way."

Many successful actors take their shot at directing a film. Mortensen's busy with other forms of art-poetry, photography, songwriting - in which he is drawn to themes similar to those that shine through his recent film characters. "I like the big stories, the big landscapes, the big sweep. But I also find that in little stories. I'm interested in tests and ordeals. That can happen in the Sahara Desert... but it can also happen in a room, in a kitchen sink drama. It happens in people's lives."

These "ordeal stories" have a lot to teach us, he believes. "The things that we remember are the good and bad things that are out of the ordinary. Whether it's a horrible car accident, or a friend gets sick, or family problems - things that take you by surprise and rearrange your life for a long or short period, those are the things you remember and potentially learn something from. Any ordeal for a time clears and purifies your vision of yourself and how you fit in or don't fit into the world. Ordeals are what make sense of life for you and teach you things. Those are the kinds of movies, at least as an audience member, that I'm drawn to."