Viggo, a movie star forced to fight - "Heroism? It's only propaganda..."

Source: Repubblica
The actor jokes about his allergy to light roles "I don't smile very often in the movies because, unlike many colleagues, I don't care about my image." 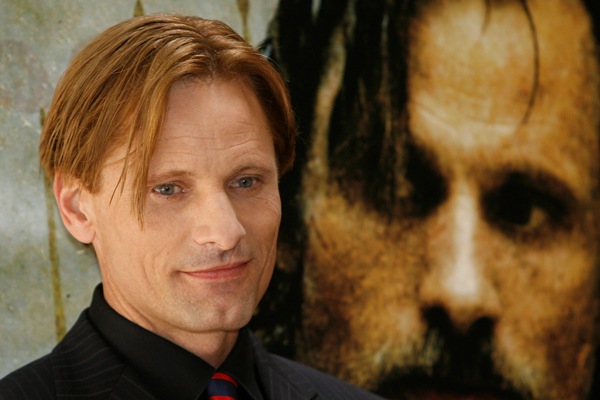 Alatriste: Rome Photo Call 6.18.07.
© Abaca USA.
Mr Viggo Mortensen, why do you never smile on the big screen? The star who more than any other embodies adventure, battle, drama, the epic side of the current cinema - just the complete opposite of comedy - thinks a little bit. Then a touch of irony appears on his face: "Well, I'm not a guy who often smiles even in the real life," he admits, "and anyway I'm not like my colleagues who, for image reasons, in the movies always show themselves with a perfect look and smiling, even if the character doesn't require it at all..."

A sort of professional manifesto, said by the most "fighting" star in Hollywood and the surrounding areas, sex-symbol against his will, the one whose mission - on the big screen - is always the same: being brave, dauntless, and fighting. From Lord of the Rings, where he portrayed Aragorn, to the movie that brings him to Rome today, The Destiny of a Warrior, directed by Agustìn Dìaz Yanes, distributed in Italy by Medusa and based on the literary saga of Alatriste, created by Arturo Pérez-Reverte. In the movie Mortensen actually portrays Alatriste, a mercenary of the 17th century, who goes back to Spain after having fought in Flanders, and lives amongst the difficulties of being faithful to the King, the intrigues of the Holy Inquisition and the tricks of another ruthless mercenary (Enrico Lo Verso).

After Aragorn, another fighter, epic character, even though in a different context: here you are an accomplished hero but a man with a dirty and dark side...

When I read the books which the movie is based on, I liked them so much: they told me an interesting and complicated story. The character too is more complicated than my previous ones. For this reason the movie can even catch the viewers unprepared: they expect a lot of action in imperial Spain, and they find themselves deeply lost in events full of shadows. I think that the Italian title (the original one is simply Alatriste, editor's note), is forceful but constrictive: the movie is about a lot more than just the destiny of a warrior.

I like his loyalty, the great value he places on keeping his word, he is true to his friends. He is not a perfect man though, sometimes he drinks too much, loses his temper and is too proud, but he is interesting. Despite the setting, The Destiny of a Warrior talks about true people, with true problems. Beyond the 17th century, it tells us what it means to be a citizen of an empire. It's the same in the movie I'm filming now, which is set in Germany, in the '30s.

Please, tell us some more.

It is called Good, and it's directed by the Brazilian Vicente Amorim. It's the story of an intelligent man, who loses himself and doesn't understand what's happening around him, the rise of Nazism. I think that even today, despite the media, sometimes it's hard to understand what's really going on. In hindsight, all things are easier, actually.

How do you usually prepare for portraying your characters?

Even when I had to portray the devil, I would have liked to have known where he lives, I'd like to have seen his home, I wanted to try to understand him. So, every time I read a script, I ask myself "Where was this man a minute before the start of page 1?" If I understand that, I can be much more relaxed on the set.

Aside from the devil, you are an icon of heroism in the movies: what do you think about that?

I trust in heroism only as an individual event, and always a bit by chance, whereas I don't trust in the heroism related to the country: when Blair ended his leaving speech saying "England is the greatest country in the world," he didn't do justice to his intelligence. It's only propaganda, a sort of stupidity.

Finally, don't you really miss seeing yourself on the big screen bursting out laughing?

While portraying Alatriste, I go through some funny moments. Certainly there are only a few. And in the movie I have just finished shooting with David Cronenberg, Eastern Promises, I laugh even less! In general, I believe that in all human behaviour you can find a bit of fun, but showing myself with a brilliant, smiling image in the movies is not something I'm worried about.
Top of this page
Last edited: 23 July 2007 05:48:45