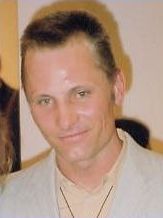 [Under credits - the words to Viggo's poem, Matinee]
After years of merging
And allowing yourself
To be assimilated,
Your hair and clothes
Have turned brown.
Then one afternoon
You exit a theatre
After taking in the
Restored version of
"The Hero Returns" and
Find yourself wanting to
Be treated special.

[Walking to left of screen]
You know, I mean, there's a lot of paintings that are done or almost done that I could have put in and there's a lot of photos that I could have included, but it feels good. I mean I had a little more time to, um, to get this ready and think about how things would go together. So (pause) I feel more comfortable with this show than other shows because I didn't have the same stress.

I had this job that I thought I was going to be doing for the past six months -it actually fell through - that I didn't do and so, I had more time for this. Because I had more time, I kept working on things and some of these things are, most of them are started there - I do a lot of things I make at one time or almost finish or maybe think they are finished, but they didn't sell or I didn't show them or I wasn't sure - and then I might obliterate big parts of them and re-do them.

[Gesturing to red painting: After Darkly Noon, 1999-2002, CoM p.42]
This being one of the paintings I made actually, uh about 3 years ago? 3 1/2 years something like that, and uh, it was quite a bit different. It was a little, a little more one dimensional, I guess. It had a - it was interesting - but the elements were separated. And it's gotten other layers and more information of things that matter to me. So it's sort of like a living journal, I guess, a little page from a more-or-less living journal. I know there's things in there that I haven't written down in journals or kept - you know, words, images and thoughts. So it's a - it's a construction that takes time. And although sometimes it's frustrating because of other obligations that I can't, like, sit and do this for, say, months at a time - you know, I can get a few days here and there - the good thing is that I'm forced to leave them and come back to them or take them with me to wherever I'm going and just sort of look at them when I get a chance and do a little more and a little more. It's like sort of a pad or a notepad that might be by your phone and then you are sort of doodling as you're talking and then over time, say by the end of the week, you have all these weird doodles and you might remember maybe drawing them in one sitting or something, you know what I mean?

[Standing in front of blue painting: Gulf Stream, 1999-2002, CoM p.42]
But that's good. This is like that other painting. It's got a lot of things that I remember. But really it doesn't matter in the same sense that if you're really thinking your own thoughts, an actor or an actress is, it doesn't matter what they're thinking about. You're watching them on screen and you know something's going on that's real. It's not just a perfunctory, you know uh, exercise of, you know, memory and just getting it over with - I mean memorizing and saying things. If you're actually thinking real thoughts, there's something percolating (pause)- for me there's a lot of things in this that - it doesn't matter that people don't know what it is, or what it is to me, as long as it feels like something is going on, you know?

[Arms folded. Looking straight into camera]
The results in here are mine. In the movies, they never are. You know, it's not my thing what you see on the movie screen whether you like it or not. I mean anybody that, that I've worked with in the movies would probably tell you that I sort of don't let go of the bone, you know? I sort of keep on trying to figure out things, 'cause that's the thing I'm most comfortable doing. I'm not comfortable saying, even on a shoot that's like a year and a half like the last one, I wouldn't, I might think like "OK, I've got this character, now I can just show up for work." Some people are able to do that and they're comfortable and there's nothing wrong with it. I don't feel comfortable unless I'm sort of always seeing what - you never know what might come to your rescue, to your aid, you know? I mean a bird might fly by and you might think about birds or movement or color, or, you know? - but it's not something that you can control.

I don't have this deep-seated fear, any more than I have in the past years with poetry, that people will go, "Oh yeah, it's an actor, it's another actor painting or another actor reading poems, another actor making photographs." For me, it's like, um, ah, it's just what I do and (pause) I can't, you know what I mean? Right, it's no big deal. I mean, I feel, uh, secure in what I'm doing for the most part in that I like it. Not secure enough, you know, I'm nervous about everybody looking at it obviously, and I'm my hardest critic probably. But you know, I know that it's not just a hobby, you know - that I don't do it- it's not a luxury. It's sort of, to me, in a way, it's a necessity. It's just something that makes me feel a little more comfortable in my own skin if I'm getting some of these things out.

[Close-up. Looking into camera]
I'm not always the best person at communicating really directly? You know, in words? unless they're in poetry or through images.

[Under credits]
Which one of you is day, which one is night?