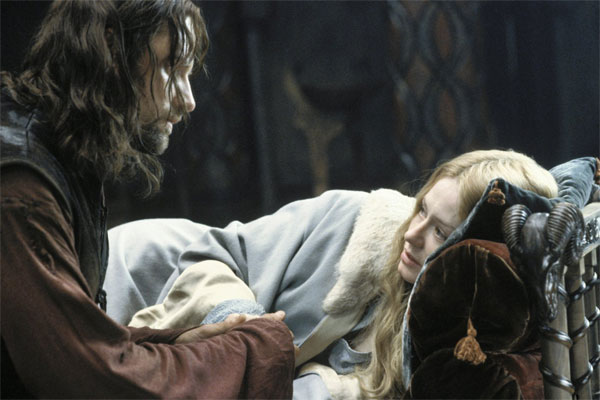 
Over the last two years, Viggo Mortensen has come to embody the noble virtues of heroism, bravery and - let's be honest - rugged good looks. Bryan Cairns sat down for a chat with the man who, with the Rings trilogy's climax, looks set to become...The One King.

When filming, were you consciously aware which scenes would contribute to the beginning, middle, or end?

I never looked at this any other way than one long story that gets increasingly complicated and challenging as you go along, which is how Tolkien probably saw it. He kept setting traps for himself. First, by breaking up the Fellowship, then having to juggle three storylines, four if you count Gandalf, and keep them all interesting. Obviously, in the third one, which had the same problem for Peter Jackson, it was how to make the storylines even more interesting before bringing them together again. The task for Peter was to heighten all that and balance them as more significant things happen.

Considering two thirds of this epic adventure is over, how are the stakes raised for Aragorn in The Return of the King?

It's a continuation of what has always been his greatest challenge: to be himself. Starting with Helm's Deep and throughout The Return of the King, Aragorn will no longer have the luxury of acting for others and walking away. He is now Aragorn for all to know and judge. He's under pressure to be a public leader and not the lone ranger type. You see when he makes strategy decisions, and asks others to follow him, it is on his head. It's not just him and his horse going to the Black Gates, basically to commit suicide in order to buy Frodo more time. He's convinced armies and friends to fight together. He doesn't order anyone to do anything.

To become king, Aragorn must travel down The Path of the Dead. What does that refer to?

The living dead are spectral beings of men who a long time ago broke their oath to Aragorn's great ancestor, when they pledged to fight on behalf of Gondor. They broke their promise so their punishment was to be confined to The Path of the Dead inside this mountain until such a time as they keep their oath. However, they had to be asked or ordered by an heir. And since there's only one heir, which is Aragorn... He does take his companions Gimli and Legolas with him and confront these beings but it is more of a symbolic and psychological test. But why should he fare any better than they did when they couldn't cut it? So going down The Path of the Dead is a culmination of that psychological journey beyond how scary these guys are and how physically difficult it is going into this place. It's really an intense battle.

Besides a case of insecurity, how does Aragorn view becoming king?

At the beginning of The Lord of the Rings, Elrond tells Aragorn it is his destiny to do this and Aragorn, not even looking at him while he's at his mother's grave, says "I do not want that power. I've never wanted it." There's no question about his head about being in the right place concerning his companions and Middle-earth. For 70 years, he's been helping others, so it's not a question of bravery. He just feels insecure and resentful about this imposition of his birthright. It's an interesting aspect of the book that deals with destiny, fate and free will being so important. It's an interesting contrast.

The Battle at Helm's Deep was mind blowing but in terms of scope, how does the upcoming Battle of Pelennor compare?

I haven't seen the movie yet and, likewise, there's a battle at Black Gate. I think Pelennor does dwarf Helm's Deep in a way. It's different in that it's daytime but there's also huge amounts of cavalry, giant flying creatures, and super orcs that are now new and improved. At Black Gates, you have super trolls who are bigger, badder and can fight by day or night. In terms of sheer numbers and types of opponents, it is much more daunting. I suppose there was 10,000 coming to Helm's Deep, which is bad enough, but now there's much more than that. It's unbelievable.

Is it physically and emotionally draining doing such grand and elaborate battle sequences?

You kind of get withered, but you're doing it with a team so everyone's going for it. If everyone was sitting on their ass in the background, that would be one thing. But the way this movie was made, every button, every bit of embroidery, sword, knife, shoe, horse, and every bit of choreography appear 100 per cent. I've never seen that and I'm not sure I ever will again, to that degree. If you do get really tired, somebody will come lend you a hand. It was definitely a team job.

Do you find after all that action, the love story is a little more welcome?

Yeah, it's a relief for a change of pace, especially when it's with a beautiful elf queen, whether it's Cate Blanchett, Liv Tyler, or Miranda Otto playing Eowyn. Those scenes have their own challenges too.

What kind of woman is Eowyn?

She is a very grounded character in the book and you get more of that in the third part. In a way, she's a very modern character. As a role model, she is very strong, can take care of herself, and knows how to fight.

You had a note above your mirror that said 'Adapt and Overcome'. What made you write that, and how did it help you get through The Lord of the Rings?

I heard those words from one of the guys who had trained me early on with weapons and it just seemed appropriate. It was true throughout shooting - you had to adapt to the weather, or scenes that changed or were rewritten that day. Just like in the story itself, there were constant surprises to deal with and just when you think you've achieved some victory, some greater obstacle presents itself. It's like some ridiculous video game that gets worse with every level.

So was the hardest thing to overcome the painful injuries?

Nahh....the reason people latch on to broken teeth and bones about me or Orlando is because we're actors. The point is a lot of people got hurt. Thankfully, for the most part, no one got hurt really badly but getting hurt physically and getting tired was a constant thing you had to accept. Some of my stunt men got injured worse than I did. I understand that, being an actor, it's going to be written about. Even if I keep saying the stunt guys got the worst of it, that's not the printed thing. It was more about being mentally tough because this was not a sprint. It took a long time until we were nearly done that you could accept the end was near. Little did we know three years later we would still be shooting bits and pieces.

Your son Henry convinced you to take the part of Aragorn. What was his impression of the final product?

Henry is typically understated, so if you know him, approval from him basically comes in an answer like "You guys did okay, you guys did all right." But I would have heard from him in detail if we had screwed up. I think he was pretty well pleased and as I found out later, very happy for me to play a character who, as he put it, "finally has an action figure." I should have realized that.

Is he known as Aragorn's son at school?

I don't think so, or that I know of. He doesn't try and impress his friends with that. There's a big difference between Strider's abilities and mine!

Did you receive any props as a memento?

I was given my original ranger sword, which I use until I get the reforged sword during Return of the King. It has all the nicks and dents, but I kept it sharp. It's a nice souvenir and the first prop I've kept from any movie. They presented it, then took it back saying "We'll mail it". I haven't gotten it yet but I imagine it's on the way.

Did you develop the same close bond your co-stars have talked about?

Yeah, we could have just hated each other. The long period did force us to bond, but this particular group of people that Peter Jackson and crew assembled became so close I can't imagine having another experience like that, certainly not in the movie business. Nor do I imagine I'll be in a movie that took so long to make. The memories I carry and the friendships I made are more valuable to me than any sword or anything else.

After this instalment, will we ever see Aragorn again?

To me, this is a continuing story. When you get to the end of LotR, it's the Dawn of the Age of Man and there's all sorts of problems that come with that. If there's a lesson from this book, it's to remain vigilant and keep an eye on yourself and not do the wrong thing. And, in terms of living, Aragorn will be 250 years old. He's not even halfway there yet.

Lastly, after shooting the LotR trilogy, does everything else seem like a walk in the park?

Yeah, it does make everything else seem easier. When we were filming Hidalgo in the Sahara Desert, I remember some of the crew complaining "Oh God! We've been here so long and we've got so long to go and the weather and the wind...." I didn't say anything but I just thought "What are you talking about? You have no idea!".

Viggo Mortensen on preparing for Boromir's death scene in Fellowship

"We prepared that scene, but they didn't really discuss specifically what they wanted. It was rare that we had time to discuss or prepare scenes at all. We'd often get rewritten scenes on the morning we had to shoot them. In this case, it was early in the shoot, the first month, and Sean Bean and I were able to sit down with Philippa Boyens and work on the scene the night before we shot it. I'm sure Peter had input into what she was saying to us, as well. We stayed up late working on it, trying to figure out what was the best way to get the points they wanted accomplished. It was one of the more satisfying exchanges for me, working with Sean Bean on that scene. Sean and I were able to work at it in a good way. We were able to think about it and talk about it in certain general terms, where we hoped we would go with it. Then, the playing of it, and how it would go emotionally, grew organically out of our work during the day. We did half of it the morning, and half in the afternoon. We took a day to shoot it, which seemed like an unusual amount of time to me, because later on, towards the end of the schedule, we would have probably done it in half a day. It was an important scene for Peter and obviously very important for Boromir. It vindicates Boromir and makes up for his lapse of weakness. He has more than redeemed himself by giving his life. It was also a turning point for Aragorn. It's the beginning of him being given more responsibility as a leader. I liked the way that came out; it felt like it could have come out of the book."
Top of this page
Last edited: 6 May 2005 16:19:04
© Film Review.