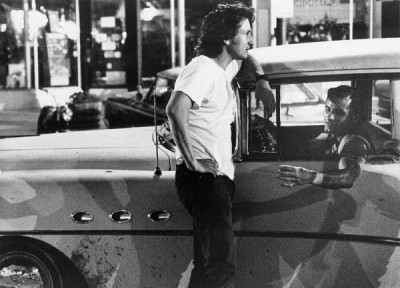 © Westmount.
Penn's fondness for the story that became The Indian Runner goes back nearly ten years, to the New York apartment where he sat with his then-fiancée and listened to Bruce Springsteen's acoustic album, Nebraska, which contained a track about two mismatched siblings. After the record was finished, his fiancée decided to call Springsteen - a task made considerably easier by the fact that she was Pam Springsteen, his younger sister. 'So I got on the phone,' Penn recalls, 'and I said something like, 'I'd like to make a movie out of that song someday.' And he said something like, 'Oh, okay.'' Over the years, Penn says, he harboured an ambition to play the younger brother and discussed it with some of his acting chums. 'I mentioned it to Bob De Niro at the point we'd decided to do We're No Angels, as we were trying to come up with something to do together. Then I talked to [writer] David Rabe - and in the week that he was thinking about it and didn't get back to me, I just started writing it.'

Penn banged out the script in 30 days, deciding 'by page three' that his face was wrong for the role, and that he'd be better off just writing and directing. Fully cognizant of the informality of his go-ahead from Springsteen and the Boss' reluctance to allow his songs or their premises to be turned into movies, 'I thought the way to go about it was just go balls-out and do it, so he could see the work in front of him and not some idea, and hope that he liked it enough to let me.' Once he'd finished it, though, he filed it away, instead concentrating on a John Cassavetes script he'd purchased after the filmmaker's death in 1989.

Then, Penn recalls, he got a visit from Don Phillips, a producer who'd known him since the Fast Times days. Penn pressed the script into Phillips's hands, lying a bit that its author was a prisoner with the remarkably preppie name J. Club McPhee. 'He said that he was on death row at San Quentin,' recalls Phillips, 'and I said, 'I don't care who this son of a bitch is; he's a hell of a writer.'' Once advised of the ruse, Phillips (unbeknownst to Penn) took the script and the bogus tale of its origination to his longtime compadre Thom Mount. 'I knew that Thom was very close to starting his new company with Japanese money,' says Phillips, 'and I approached him saying that this would be a wonderful picture to start off with because it had class: rather than making some high-concept picture, this would be a great introduction to his new company.'

While Penn worked on rewrites, Mount continued to hunt for financing, finally securing $10 million or so from MICO/NHK Enterprises, which had poured an estimated $35 million into a Charlton Heston-Tim Matheson dog entitled Solar Crisis. 'Whenever I'd talk to him, I'd get jacked up,' says Penn, 'because it sounded like it was all happening - and then when I'd talk with the lawyers and the this and the that, they'd say, 'Well, the money's not there yet.' But he did it, he put it together, here we are. I don't think anybody else in town in his position would have funded this: I had no track record, and what track record there was was not necessarily favourable - and then I don't think it's, on the surface, the most commercially viable sort of material. We didn't have Charles Bronson [who plays the Roberts patriach] involved until we were a go movie, we didn't have Dennis Hopper [who plays the bartender] until we were a go movie.'

When the picture finally got the go-ahead Penn immediately knew whom he wanted for the stalwart older brother: David Morse, the soft-voiced St. Elsewhere star whom Penn recalled seeing in Inside Moves. 'Sean really fought for me,' says Morse. 'I knew there was a kind of a pressure on him to go with bigger-name people, but he had a vision of who this character was, and somehow I fit that thing. He's an impressive man: everyone has this image of him as a fighter in the other sense, but truly in the best sense he's a real fighter, a fighter for people, for what he thinks is good and right.'

The last time a major motion picture was shot in Nebraska, the film's younger star (Debra Winger) fell in love with the state's governor (Bob Kerrey). But as Viggo Mortensen prowls the midnight location, a Shelby Mustang ablaze some 200 feet beneath him, and the camera zooms in on his extended fists, KILL and FUCK tattooed Thunder Road-style on his knuckles...well, somehow, it just doesn't seem worth asking what Mortensen might think of 52-year-old governor Kay Orr as a woman.

For the role of the hellion Frank, Penn caught sight of Mortensen's performance in Fresh Horses and knew he had his man. Once Mortensen was cast, Penn helped him fully plumb the depths of his character. 'I had always thought of Frank as a barking dog that bites,' Penn says, 'so I asked Viggo to spend some time with a friend of mine who's a Hell's Angel who knows the world and also is a fighter - not that there's a lot of fighting in the movie, but I felt that he should know it and be able to feel that physical confidence.'

'Hopefully what will come across is that he does things he does because he's pure, pure good and pure bad,' explains Mortensen. 'I mean, compared to me and most people I know - we kind of have little controls and little ways of limiting our behaviour and our reactions to people. Frank doesn't really do that.'

Great things have been predicted for Mortensen: his good friend Michael Blake, who wrote Dances With Wolves, has called him 'the new James Dean' (the very tag affixed to Penn some years back) and says Mortensen might have been his first choice to play Dances' John Dunbar. The set has been visited by a flotilla of trolling agents inquiring about his current agency status. Facially, Mortensen looks like a cross between Sam Shepard and echt movie villain Lance Henriksen, a suggestion enhanced by his character's myriad jailhouse tattoos (applied in hours-long makeup sessions) and the unperiodlike leather brace on his right hand and wrist, which he wears constantly and removes only immediately before shooting. Word on the set is that Mortensen busted a knuckle and sprained his wrist during rehearsals for a fight scene, but when asked about the injury, his eyes take on a demonic glint.

'Ah, you know, he tries to help us all in different ways,' he says. 'It's just one he picked that day.'

'It wasn't the bite so much, it was the tearing,' he continues. 'That's when I thought I could get very sick from this. He clamped down, and it was too late to do anything. So I tried to stay really still, like you would with a rabid dog; you pull away, they just sort of sink in a little more. And sure enough, I tried to pull away, thinking it was over with, and that's when it started to tear.'

As the light bulb over his head starts to illuminate, a visitor asks the obvious question: Has there been any talk on the set of having Penn humanely destroyed? 'Ah, I don't know,' says Mortensen, 'I try to stay impartial. I got a week to go on this; I want to keep things on an even keel. So he broke my hand, you know what I mean? I got my shots.'

The Delmar Hotel is a flophouse so authentic that virtually the first sight after a visitor crosses its threshold is decadence connoisseur Helmut Newton preparing to do a shoot in one of the upstairs rooms. Its lobby is wall-to-wall with life's unfortunates; one, a near two for Samuel Beckett, boasts a softball-size occipital tumour. In an upstairs room, waterlogged plaster peels off the walls above an unspeakably stained mattress. It is like a Smithsonian of seed.

This is room 202, practically at the top of the stairs, which has been dressed as Frank's crash pad. Mortensen walks in and surveys its detritus. He takes a washcloth from the room's sink, folds it, and drapes it over the railing at the foot of the bed...no, not just yet. First, he goes to the bottle of Southern Comfort that sits on the dresser, lies on the bed, and puts the bottle between his legs to open it. Then he splashes some sour mash on the washcloth and re-drapes it. With his thumb over the top, he sprinkles more over the sheets and replaces the bottle. Finally, he ponders the room's Bible: Should it go over the bed? No. Under the pillow? No.

Then he seems to get an idea: he grabs his switchblade, inserts it as a bookmark, and places the Bible on the bed. There.

Such attention to detail was the hallmark of Penn's best work, but he's just as happy not to be the performer doing the obsessing (though he isn't above giving his actors line readings). To him, directing has the advantage of relative anonymity. 'Your name's on the screen for a bit and then you're out of it,' he says. 'Even your detractors and those who'd love to put a knife in your back forget that you're involved - if you do good work. And if you don't, you deserve everything you get.'

What he will get with The Indian Runner remains to be seen. Most of the performances, especially Morse's, are lovely, and Penn's shot selections seem inventive and energetic rather than hackneyed. It is not as director but as writer that he has overreached: there are more than a few poky sequences, and his decision to use Joe as an occasional narrator seems to lessen the film's dramatic pull. It is the characters of Joe and Frank who emerge most strongly, not as antagonists so much as different sides of the same personality: the driven rebel and the duty-bound worker - a personality not entirely unlike that of its creator, who, for all his piss and vinegar, and occasional finger-pointing, doesn't seem to have lost sight of what makes the medium work. 'There are those movies that are made to supply us with dreams, and there are those movies that share a dream with us,' he says. 'I'm interested enough in other people to be interested in sharing their dreams, but I don't need to be supplied with dreams. I got my own.'

And bearing ample testament to that is The Indian Runner's unexpectedly uplifting ending, one that amid much gloom and foreboding offers a fair amount of promise for his characters. 'It surprised people,' Penn admits with a grin, 'because I think I'm just perceived as someone who has no hope.'