Viggo Mortensen: "I think I´ve learned from my mistakes"

18 May 2013 21:27:00
Source: Tiempo.
Found By: Ollie
Categories: Magazine/Internet Interviews Media Movie Promotions Movies On The Road
Many thanks to Ollie, Rio and Zoe for translating the interview from Tiempo posted earlier this month.
Quote:

He is premiering On the Road, an adaptation of Jack Kerouac´s celebrated novel, icon of the Beat generation, published in 1957, and considered one of the most influential books of the twentieth century. 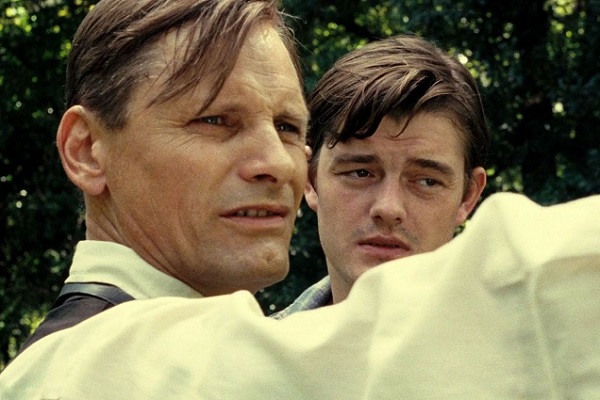 © MK2 Productions.
No pretentiousness at all. Born in New York in 1958, a year after the publication of On the Road, Viggo Mortensen returns to the screen with an adaptation of this title, which, according to Time magazine, is one of the twentieth century´s hundred best novels written in English. Directed by the Brazilian Walter Salles (Central Station, The Motorcycle Diaries) and with Francis Ford Coppola as executive producer - who some decades ago bought the rights - the film competed in the official section of the last Cannes film festival and later went on to the one in Toronto.

Yes [smiles]. When Walter Salles offered me the role of Old Bull Lee, I was finishing shooting A Dangerous Methodwith David Cronenberg, and I told him, "I don't think I can prepare myself for the role in time." But I had also gained weight for the other film and Walter told me, "I think you can. It's one version; you can look any way you want. I want you in the film for your ideas and for the way you approach your work." And I'm glad I did it.

So you went from being Freud in A Dangerous Method to Burroughs.

Yes, and in certain ways, the characters are related. Walter Salles, like Cronenberg, wanted me to do a character who acts as a mentor, so that ended up being very interesting. Freud and Burroughs are different, but they're alike in some things. They are unorthodox, but very cultivated. Burroughs was a junkie, a little crazy and very methodical in his reading. He'd read a lot and continued reading all his life. Freud taught Jung because he seemed to him like a talented young man who could contribute things, and Burroughs also had that taste for teaching others, a very generous man who, like Freud, did not claim ownership of his intellectual ideas, his conclusions, but rather shared them.

Old Bull Lee is a pseudonym of William S. Burroughs who, by the way, under the effect of drugs, accidentally shot and killed his wife while both of them were acting out a passage from the legend of William Tell.

It's true. I worked on the film for a week, including rehearsals. And I knew that for this story, he was an important character, since Burroughs was a source of inspiration for all young writers like Ginsberg, Kerouac, Gregory Corso and many others, because he had great knowledge of literature, drugs, history, languages...but above all, for his anarchist spirit.

And how was your experience?

The truth is that I arrived on the project after almost everyone else, but Walter Salles was very generous with me and the script was very well written. Besides, I liked his ideas regarding the equilibrium established between Old Bull Lee and William S. Burroughs a lot.

Did you need special makeup?

We were going to do it and possibly Stephan, who had transformed me in The Road, might have done it, but he couldn't and I decided to do it anyway. I resemble Burroughs more, in the color of my eyes and that stuff, so I prepared it more from within.

When did you discover the book? By the way, [it was] one of Jim Morrison's favorites.

I read it at 17 or 18 and later, a couple of times. But the same thing happens to a book as it does to many other things.With the passing of time, what is written, unless you revive it, is something dead. So I had read the book, I had an idea of the time period, the Beats, but I had to go back to read it again so that it would come back to life. So that was the first thing I did and reading it again, I realized the importance that it has now, when we are in a moment of protests and mass movements, especially with young people, in Europe, North America, China, the Near East...led principally by young people who carry the spirit of that time. Because in many respects, whether from fear, insecurity, the economic crisis...the times are quite conservative now. And currently, there's a kind of repudiation on the part of young people similar to that. People were simply saying, "Why not do it? Why not say it? Why is it like this?" There was a rejection of the status quo dictated by authority. And people said , "No, I think not. I won't swallow this." [He laughs]. "I don't believe in this." There are lots of questions in the environment now and I suppose that for Roman Coppola and his father (producer of the film) it had to have been tough to have to wait 30 years for this film to be brought to the screen. However, this is probably a great moment for it to be premiering, since people will want to see the film. Not only older people, people of my generation, people who lived it or the generation that came later, like me, who saw it in the 70's with a kind of nostalgia about the book and about the post-war period in North America. But also young people who are discovering the book now and identify with it.

Did you like the way the movie turned out?

Yes. In fact, while I was preparing, I wondered, "How is it going to be done? The American way, where you put it in a box and there it is, or is it going to make you ask yourself things, almost everything, about the present day? Will we actors make something new with the characters?" I think that Walter encouraged us to do that, and it's a good thing. I think it would have been a mistake to rein us in. Many directors, even good ones, would have chosen to make a version hemmed in by the book, and maybe the real purists would have liked it, but I like when it comes to life. Also, they could have left out the effects of taking drugs, not sleeping, driving too fast, smoking a lot, pregnant, abandoned women. Not everything in the story is rose-colored. Some directors might have left out or minimized those things, but I think that Walter balances it very well. The movie is disturbing at times. It's very pretty, and the more you get into it and let it carry you away, the more you enjoy it. When I saw it, I was just caught up in it. I let it carry me away as if it were a song. It makes you feel like music does: boom, boom. It's almost like Neil Cassady (called Dean Moriarty in the movie), who never entirely stops. I think it's well made and was worth the effort.

What's your opinion of improvisation?

Improvisation is good if you know what you're doing. That sounds like a contradiction, but it isn't. Actually, Burroughs didn't improvise so much as he tried things out, in the sense in which the surrealists did, so that he tried to write more quickly than he was thinking. But the foundation of his thought was there; it's not like the way someone who'd never read a book in their life would do it.

You have a magnificent career. You're very versatile.

[He smiles]. I think I've learned from my mistakes. Acting is a creative thing, and when it turns out well, it's the easiest, most entertaining thing. But when it's not like that, it's the most humiliating. Besides, sometimes the director can't help you; you see that you can't find a solution... Sometimes that happens.

And finally, I know that you're a fan of the Argentine team San Lorenzo, of the New York Giants... and of Real Madrid?

Of course. Go Madrid!
This translation can also be found here in our Articles section.