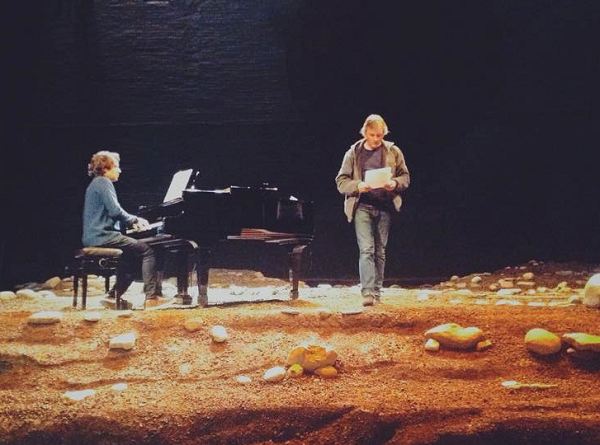 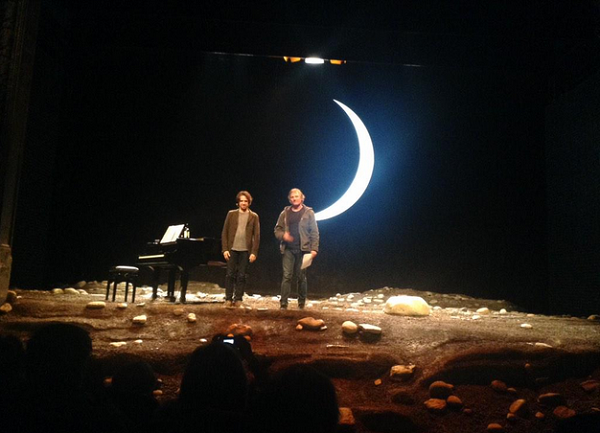 Categories: Signings and Readings
Our thanks to Carolina from tomhiddlestonargentina.blogspot.com for sending along and sharing these images from Viggo's book signing in Buenos Aires on September 16. They give us a good idea of what must have been a great event.

It was my first meeting with Viggo, He was at the presentation of a book as you know, I could give him a present after so much time, I write a little note, I told him that it was something of San Lorenzo and he looked at me, and I gave him a kiss, I thank him and he said thank you, all in Spanish, of course. 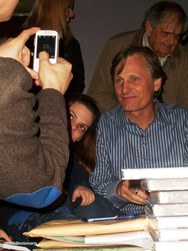 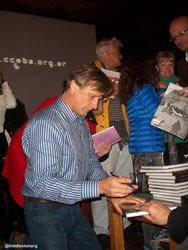 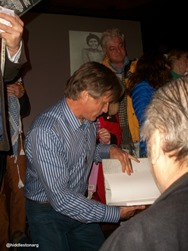 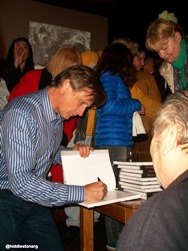 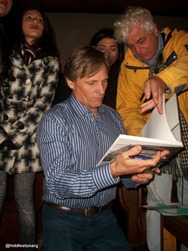 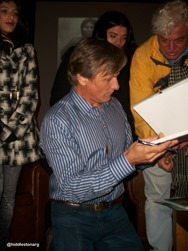 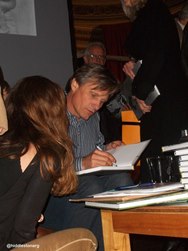 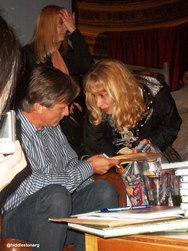 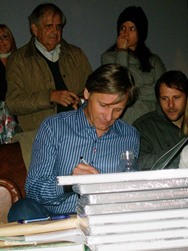 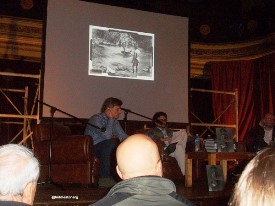 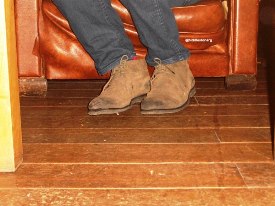 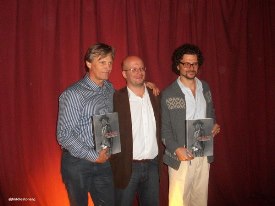 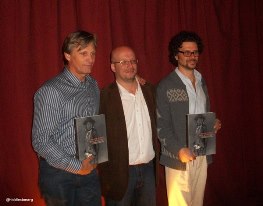 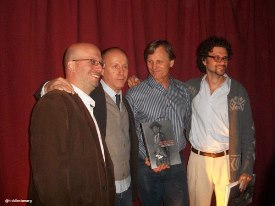 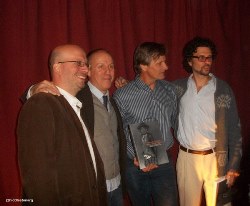 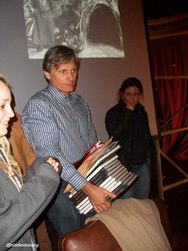 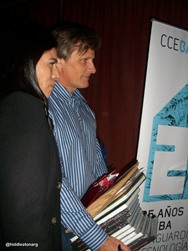 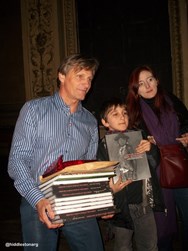 We also want to thank Santa for her wonderful report and for sharing in her enthusiasm. 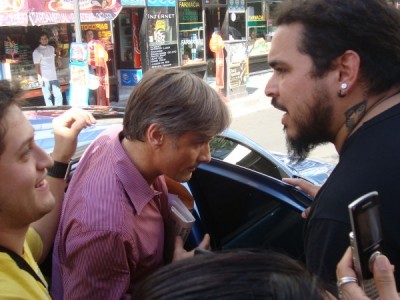 Córdoba - December 2, 2010
Image Eliana Gorelick Czenik.
© 2010 Negro&White.
Part 7
After the readings, they let people ask questions. That was when they asked how he had come to know Talo's poetry, which I've already told you about, and the whys of his strong connection with Argentina. That's where he told more or less what appeared in the articles and what he always says, that he went to live in the USA and missed the language, that he looked for El Lagarto Juancho and Patoruzito [comic book characters], the same as I did (we're the same age), also the trading cards for soccer players. An exiled Chilean asked Talo about exile and suffering and at the end, a young guy thanked Viggo for being the way he is and well, he doesn't like compliments much, so he said he was going to sign the books first, that if people had other things [to sign], that could wait until the end, that he'd sign them just the same but afterward. He asked us to form a line and in spite of Argentinians being so disorganized, soon afterward, after he signed for the most eager people, we were lined up in a dignified line, fortunately. I took just a few photos of Viggo; there are only 5, but with the first shots that Carolina already posted, more aren't needed. Farol will finish off the night, the things I've forgotten about. [....]

Part 8
Yesterday morning, I was queuing up in the Court House where El secreto de sus ojos, that won the Oscar, was filmed, and then I thought I had never given Viggo anything. When in 2008, a few days short of his 50th birthday, I saw him looking so sad in SL, I felt bad about not having given him anything. So, I said to myself that the best present for him was a book. I went to Avenida Corrientes and bought a compilation of love poems by Mario Benedetti. I thought he would like that.

I got in line with the CD and little book of Canciones de Invierno and the beautiful book by Talo Kejner. One of the two girls from SL explained to me how her camera worked and asked me to take a picture. I did and I hope it has come out right. There, a rather rude girl who hadn't bought anything, overwhelmed him to have her picture taken with him, to which he agreed, but was slightly annoyed. The girl kept bothering everybody about the picture, and then he asked her, "It hasn´t come out right?" while she was looking at the camera and talking loud. Viggo, annoyed, gave her a scalding look . It was my turn then, and I thought what a pity that he got upset (and he had right at this moment). I chose to approach him from the side, loaded with bag, umbrella and the present for Viggo. Then, although he was looking serious, I gave him Canciones de Invierno to sign. He asked me my name and I asked him softly whether Talo, the poet, could sign his book Las pequeñas grandes cosas for me. He liked that. He looked into my eyes and, very politely, said, "Certainly, of course. That's why he is here." I then told him that I was asking because I didn't know if he wanted to sign. (Nobody was asking the poor man, who was sitting there looking, for his autograph. It was not fair.) Then he asked Talo to sign and gave him my name. He loved me asking for Kejner's signature, which was a great pleasure for me. Then, before going to Talo, I took out the little bag and said to him, "Now, Viggo, I want to leave you a present from a cuerva to a cuervo." He started laughing, saying, "You too? Look, look!" while showing me the pins he had on his shirt pocket. Then I told him, "But this is not from SL. It´s a book of poems by Mario Benedetti; do you like him? I saw you posted some of his poems in Perceval." "I love him!" he said to me. "What's the title of the book?" And then I drew a blank and said to Viggo, "I don´t remember. I think it's Love, Women and Life. It's a compilation of his best love poems." He then said to me, "Come and give me a kiss." And I said, "Of course, Viggo. How would I not give you a kiss!!!" And, well, he gave me a kiss. A great guy. What can I say. Then he posed for the picture with me (I hope that the girl who took it sends it to me) and he gave me another kiss!!!! Girls, this time I really got lucky!!!!!!!

When I went to Talo, Viggo was telling him he had to put my name and I said to this excellent poet that he wrote wonderfully . He's got an incredible gaze. He must have been a very handsome man when young. His gaze is crystal-clear and his eyes are very beautiful, but they also transmit pain. He wrote my name in the book and "A pleasure" and his signature. And he said it to me several times, a pleasure, and I said to him, "A pleasure for me, and thank you very much." Viggo, who while signing was looking at everything, when I left said "Take care." "Thank you, Viggo, you take good care, too." By far my best experience with Viggo. There I realised that what matters most in this world to Viggo is giving to another and I understood the act of love he had made for that elderly man who is getting to the end of a very painful life and who never was acknowledged as a poet.

This man had been writing during all of his life and his work had never been read by anyone. In Talo's voice, when he thanked me for asking for his signature, I felt the excitement that it caused him. That is, that someone AT LAST recognises his value as a poet generated a tremendous emotion in me that left me hanging around while Farol was taking pictures. I must say that they have generated a current of affection that cannot be described with words - that's the true meaning of "being humane". Well, I don't want to bore you with my story, but I still don't understand why so few people asked Talo to sign his book. Everybody wanted Viggo's only. A pity, because this man is a great poet and now I keep his book and signature like a treasure. What else is there to say but to thank Viggo for giving us the opportunity to come to an event so warm, and cosy. That is the synthesis of the true man, in the flesh. The characters, the cinema, etc. are all worthy, but this is the best in him. And it goes beyond the subject of SL, which although it's a passion, is something else. Here he shows the truth in himself and in his soul. That is what I felt, only my perception, subjective, mine. Others will see other things. [...]