Watch or set those DRVs!

This from the people at Bleecker Street. It's quite a list of theaters! Finding a theater near you should be easy now!

Viggo Mortensen Goes Green: ‘I Trust Hillary About as Much as I Trust Donald Trump’

The ageless actor discusses his award-worthy turn as a hippie father in new film Captain Fantastic, male versus female nudity, and the 2016 presidential election. 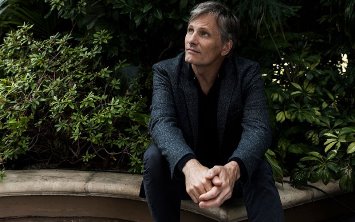 "I've always been comfortable in the wilderness," coos Viggo Mortensen. We are, as it were, quite far from the bucolic, huddled together in a booth at a chic restaurant in downtown Manhattan, a maddening mélange of unimpeded socialites, regrettable facial hair, and Viggo who, at 57, does not look as though he's aged a single day since carving up Orcs in Middle Earth. Spending most of the year in Madrid, Spain, sipping on Argentinean malbecs will do that to you.

The occasion of our chat is his wonderful new film Captain Fantastic, about a hippie father of six, Ben, raising his brood in the forests of the Pacific Northwest on a steady diet of deer, rock climbing, and Chomsky. Viggo's titular Superdad devotes every waking hour to shaping the minds and bodies of his offspring, while shielding them from the terrors of the outside world, with its meddlesome corporations, broken systems, and sugary soda.

When their estranged mother succumbs to her mental disease, the clan decides to break their eight-year hiatus and reenter society to attend her funeral. Along the way, they do their best to "stick it to the man" as often as possible, from pilfering groceries to scaring off police, but eventually come face to face with the man himself: their mother's disapproving father, played with icy Frank Langella-ness by Frank Langella.

Viggo completed a two-week boot camp with his on-screen kids prior to shooting in Washington state, wherein the gang engaged in rock climbing (he hated it), jujitsu, martial arts, singing, sleeping outside together, building a fire from scratch, and playing music. The gals attended a gutting and skinning animals class, while Viggo practiced the bagpipes and guitar—two instruments he hadn't played prior to signing onto the film. By the time shooting began, he says, they'd formed a tight fictional family unit.

"As far as Ben's worldview goes, and his way of thinking and his intensity of it, and his body language, and his kids, for me, it made it one of the most complex trips as a part that I've ever had," claims Viggo.

One of the film's indelible scenes exhibiting the aforementioned "body language" involved showing the Full Viggo, casually posing nude outside of the family's camper in front of several shocked passersby. It's not his most memorable bout with on-screen nudity, of course—that would be reserved for slicing up a cabal of Russian gangsters in a steam room in Eastern Promises, their blades coming dangerously close to his swinging phallus.

"There's a problem with nudity in the United States," says Viggo matter-of-factly, before expanding on the volume of female on-screen nudity versus male. "It's not even. It's not even.

"There's the issue of violence versus nudity," he continues. "We have no problem in video games or on TV shows or in movies of showing kids beheadings and massive shootings, yet you can't swear or can't see a male or female body. It seems odd, and doesn't seem healthy."

According to Viggo, the message of Matt Ross's Captain Fantastic concerns the importance of dialogue—listening to opposing opinions and finding a middle ground, like his freewheeling Trotskyite and Langella's tightly-wound grandfather-businessman who's worried that Dad's out-there hijinks will get his children killed.

"At the beginning of the movie, you think, oh, this is going to be the merry band of prankster left-wing outsiders going up against conservatives—and conservative ideas—and that would've been fine, but a more limited story," offers Viggo. "It's much more layered, complex, and rewarding than that because they're flawed. For Ben, you can alternate between what a great father and this guy's a maniac.

"We need to broaden our perspectives and our points of view to see what other people think—to consider the arguments of people we instinctively don't agree with—but people just stay in their camps and do research on what they already believe in," he adds. "And you have politicians say things like, 'Oh, you don't have to pay attention to those others. Just trust me, ignore them.' 'Just watch Fox' or 'just watch MSNBC.' I think this movie is striking a chord because it touches on something that's happening in the country: on the lack of social cohesion and the communication problems we have."

Nowhere is this divide more pronounced in America than in the political arena, where presumptive Republican presidential nominee Donald J. Trump, a real-estate heir turned reality star, has conducted a particularly combative and ugly campaign, giving his rivals schoolyard nicknames, claiming his opponent is playing the "woman card," and accusing Ted Cruz's father of being involved in the assassination of JFK. Oh, and that's not to mention his string of asinine and outrageous stances, including a Muslim travel ban, deporting 11 million Mexican immigrants, calling for women who receive abortions to be punished, and most recently, claiming he can relate to the black experience in America because he's taken on a "rigged" system during the current election season.

"He's only saying in cruder terms what really started with Reagan, but then took flight with Gingrich in '94: the polarizing, race-baiting rhetoric of the Republican Party for the last several decades is coming home to roost," says Viggo. "Trump is the logical conclusion. He's not very nuanced in his diatribes, but he's not saying anything very different than what [Paul] Ryan, [John] Boehner, [Dick] Cheney, and [Mitch] McConnell are saying. All of these guys have been engaging in the same divisive, racist politics."

Viggo was an outspoken Bernie Sanders supporter, but ever since the Bern's final embers went out, he's redirected his allegiance to Green Party candidate Jill Stein. Yes, Aragorn is no fan of Hillary Clinton.

But, to quote political satirist Bill Maher, there are only two choices really on the menu this election: Hillary and Trump. Viggo, in addition to accusing the Daily News of doing "a hatchet-job facilitated by Hillary's people on Bernie" during their editorial board conversation, says he's aware that the "Bernie or Bust" strategy—or supporting a third-party candidate like Jill Stein—may be paving the way for President Donald Trump.

"Yeah, I was a Bernie supporter," says Viggo. "And I know the argument is, 'Yes, if you vote for Jill Stein you're giving Trump a chance.' The Nader argument. But you know, at some point it's got to change. We should have a parliamentary system. It's really got to change."