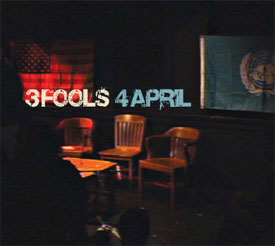 What we have all been waiting for...order NOW from Perceval Press.
Quote:
3 FOOLS 4 APRIL
Scott Wannberg, Hank Mortensen,
and Viggo Mortensen

A two-disc CD/DVD that documents the reading given by Scott Wannberg, Hank Mortensen, and Viggo Mortensen on April Fool's Day 2006 at the Beyond Baroque Literary Arts Center, in Venice, California. Part of proceeds from sales will benefit Beyond Baroque. For more information on this unique institution, please go to www.beyondbaroque.org

Click on image to enlarge.
Quote:
[quote]
By JANET MASLIN

Pity Viggo Mortensen, the director of the Center for Multireligious Studies at Aarhus University in Denmark. He edited an anthology called "Theology and the Religions: A Dialogue," and all it does is make people angry. They order this $35 paperback by mistake. Then they grouse about it online, because they thought it had something to do with the "Lord of the Rings" guy.

Indirectly, Mr. Mortensen's Perceval Press is a "Lord of the Rings" offshoot. It began operations in 2002, soon after Mr. Mortensen had finished playing the warrior-king Aragorn in the movie trilogy. His first book, the poetry collection "Ten Last Night," had been published nine years earlier. And by 2002, his art gallery exhibitions and books were arriving on a regular basis. Thanks to "the movie, you know, notoriety," as Mr. Mortensen mumblingly describes his career trajectory, they were selling nicely too.

In 2003 Perceval's roster included three books of Mr. Mortensen's: "Miyelo," "45301" and "For Wellington." Their combined effect was to put the business in the black. When his own output is smaller, however, profits are low or nonexistent. Perceval's print runs are small, Mr. Mortensen said, there is no real advertising, and its books are available primarily online from percevalpress.com. The point of the enterprise is to cast light on work that might not otherwise be published, and to present artists' work as it was intended to be seen.

Recently, en route to a film festival with "Alatriste," a swashbuckling Spanish-language film based on the popular novels of Arturo Pérez-Reverte, Mr. Mortensen stopped in New York. He had preliminary versions of Perceval's four forthcoming books in tow. Perceval now puts out about eight books a year, all shepherded by Mr. Mortensen in his typically hands-on, "nitpicky" fashion.

On this particular day, Mr. Mortensen was ensconced at the Algonquin Hotel, where the main floor recalls the Round Table, and the upstairs wallpaper pattern is fashioned out of New Yorker cartoons. His own literary tastes are not so gilt-edged or mainstream. One of the fall titles, which are expected to be ready at the end of November, is a Spanish-language critical anthology devoted to new Cuban art, intended primarily as a university-level textbook. Henry Eric Hernández's book "La Revancha/Revenge" is a bilingual alternative to official accounts of the Cuban revolution. A third new book, "Magical Meteorite Songwriting Device," reprints a set of vibrant collages made by the singer Exene Cervenka of the Original Sinners -- formerly with X, and formerly Mr. Mortensen's wife.

None are more serendipitous than the ones that yield Mr. Mortensen's own books, which are often prompted by the globe-trotting that goes with his film career. His latest, "I Forget You for Ever," is also due in November. It takes its strange title from a phrase written on the side of a bus in Iran.

Perceval will print 2,000 copies of "I Forget You for Ever" and sell them at $38 each. That print run is twice what other Perceval books are usually given, but for good reason: Mr. Mortensen's books sell out. They also go into multiple editions: one book, "SignLanguage," has had eight printings, while "Recent Forgeries" and "Coincidence of Memory" have each had seven. And as to the question of whether Mr. Mortensen's own books bring in revenue, the manuscript for "Ten Last Night" (which was published by Illuminati) has found its way to the used-book site Alibris. Price: $16,499.95.

"I Forget You for Ever" is another of Mr. Mortensen's eerily abstract photo essays, with haunting images that are titled in cryptic, oblique fashion. One street scene, "Arieto," is named for the barely visible label glimpsed on a broken record. Less subtly named are pictures of foreign cities entitled "Bomb This," intended as a form of deterrent.

Next time Mr. Mortensen does a book, it's likely to feature glimpses of Russia and London, locations for the not-yet-titled film he is currently making for David Cronenberg (who directed him in the 2005 film "A History of Violence"). After that, he has three more films planned.

I FORGET YOU FOR EVER

30 October 2006 11:38:56
Source: Perceval Press.
Found By: Migue
Categories: Books & CD's
We have an early reveiw from Migue, one of our friends from Spain who was able to purchase this book ealier than the rest of us and gives us this first tantalizing review. Many thanks for the preview Migue! 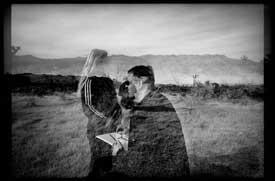 Read the review and discuss this new Viggo book here.

VIGGO MORTENSEN SHOWS IN TORREVIEJA HIS UNKNOWN FACET AS AN EDITOR 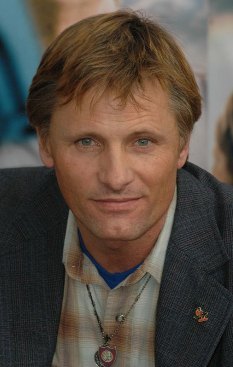 Our thanks, as always, to paddy for yet another wonderful translation.
Quote:
The presence of the attractive American actor Viggo Mortensen next Saturday at Torrevieja's Hall of Music will make many fans find out about the most intellectual facet of Alatriste's leading actor. Mortensen, of Danish father and American mother, will visit the Alicantinian village to launch the latest book published by Perceval Press, the Californian publishing house he owns.

The Joaquín Chapaprieta Torregrosa Municipal Institute of Culture of Torrevieja has published together with Perceval Press an anthology of critical texts about the new Cuban art selected by Kevin Power, former Vice-Director of the Reina Sofía Museum, and Magaly Espinosa, professor of Aesthetics at the Higher Institute of Art in La Habana.

Far from what one could expect malevolently from a Hollywood "cutie" - known for playing Aragorn in Peter Jackson's "The Lord of the Rings", Brian de Palma's "Carlito's Way", David Cronenberg's "A History of Violence", "GI Jane" together with Demi Moore or "The Portrait of a Lady" with Nicole Kidman -, Mortensen doesn't cultivate the "stardom" frivolity so much as the literary sensitivity, music and fine arts.

Although in Spain these virtues are still little known, in the United States he's considered to be a versatile artist, who alternates his work for the big screen with his fondness for photography, abstract painting, jazz and poetry. In fact, his works have been exhibited at several art galleries around the world and they appear in "A Perfect Murder" as part of the studio of the artist he plays.

Throughout its course, Perceval Press has contributed both to the spread of established intelectuals as American historian Mike Davis, and to publish the works of young artists. During the presentation of the book, Mortensen will be accompanied by Torrevieja's Mayor, Pedro Hernández Mateo.